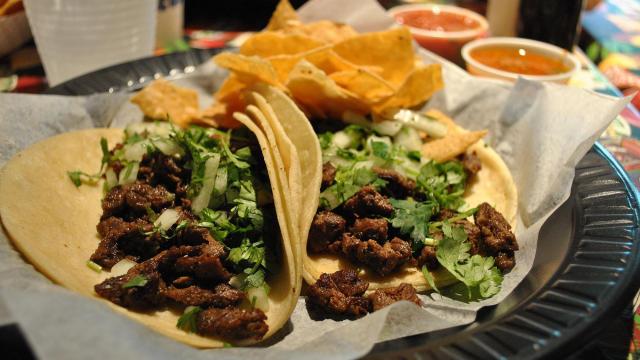 Raleigh, N.C. — It is here! National Doughnut Day is TODAY – Friday, June 5th! Look for most doughnut places to offer some sort of freebie/deal. Thanks to Triangle on the Cheap for reminding us of this national holiday of sorts! WRAL has you covered with all the day’s offerings!

Chubby’s Tacos will have a soft-opening next week of their THIRD Triangle-area location in the Heritage Publix Shopping Center at 1000 Forestville Rd. Look for a Wednesday, June 10 soft opening. Mention TFG while placing your order, and receive 20% off! Visit Chubby’s here.

The Flying Mayan (which had originally planned to open in December) at 319 Fayetteville Street in the former Wahlburger’s space, opened this past Wednesday. Billing itself as a place where “the Southwest meets the Southeast,” The Flying Mayan specializes in “fresh, made from scratch sauces, salsas, and menu items that have their roots in both regions.” It is being developed by the same team behind the Flying Burrito, located on Grove Barton Road. Get familiar with them here.

A quick update for all the Cafe Carolina fans around the Triangle – the Cameron Village location re-opens today, Friday, June 5. Their operating hours will be from 8 a.m. to 4 p.m. for the dining room, outdoor seating, delivery and takeout. The Cary and Chapel Hill locations will re-open at a later date in June. Stay tuned for those announcements. Visit Cafe Carolina here.

Over in Cary, David McCreary informed us that a new franchise restaurant will be coming to Cary’s Waverly Place soon called Chicken Salad Chick. They have 104 locations now in 12 southeastern states. No word on an open date. Keep up with their progress on their Facebook page here.

Australia’s Zambrero will open in Durham at University Hill (3109 Shannon Rd.) on June 13th. Guests can enjoy an opening offer of bowls and burritos starting at $5 on June 13-15, 2020. This will be their second Triangle location with the original location in Raleigh (temporarily closed due to the current uncertain climate and government restrictions). They offer a healthy superfood menu along with their Plate 4 Plate program in partnership with Rise Against Hunger, where with each purchase a meal is donated to someone in need. Visit them here.

Da Kine’s Kava, owned by husband and wife team Brent Waffle and Zoey Best, will open in the Joe Van Gogh space in the West End area at 1114 W. Chapel Hill St. (see closings below). The store will be a non-alcoholic bar featuring cocktails made from kava and other herbal alternatives, coffee, kombucha, and teas. No word on a timeline. Get to know them here.

Learned this week that Market Street Coffee, with locations in Chapel Hill and Carrboro, has made the decision to close both locations permanently as their leases expired. They did hint at the possibility of reopening after this all passes…but no immediate plans.

Joe Van Gogh coffee shop has closed it’s location in the West End area of Durham at 1114 W. Chapel Hill St. – the lease was up at the end of May. They still have Durham locations on Broad Street and in the Woodcroft Shopping Center as well as a Raleigh location at Cedar West and a location in Chapel Hill’s Timberlyne Shopping Center (as well as two locations in Greensboro). Visit Joe Van Gogh here.

Popular Durham coffee shop closes one of its locations

And sad to report that the inaugural Buxton Hall Barbecue’s Smokeshow Festival in Asheville has been canceled.

Here are some sites to find your favorite food trucks here and here.

Let’s do it again! What originally was a two-weekend event has been extended for another week due to demand! Drive-Thru Fair Food Days will operate again this weekend (June 5-7) from 10 am – 6 p.m. (Cash only) you can drive thru the Fairgrounds (enter off Trinity Road) and order from your car. Think Roasted Corn, Deep Fried Pickles, Corn Dog, Deep Fried Cheesecake, Deep Fried Pumpkin Pie, Gourmet Edible Cookie Dough (chocolate chip or cake batter), Funnel Cake, Deep Fried Oreos, Deep Fried Snickers, Tropical Delights Smoothies (strawberry, pina colada, peach), Dole Whip (available this weekend in Raspberry, Pineapple and Raspberry/Pineapple Swirl) and Dole Whip Floats/Cups. Cash only! Can anyone else imagine how far traffic is going to back up? Get all the details here on their Facebook page.

Drive Through Brewgaloo is a pop-up event to support the NC craft beer industry. Help keep NC breweries going by purchasing a 6 pack of your favorite style of beer or try a Taste of NC mix pack featuring 24 different beers for curbside pickup at Lincoln Theater in Raleigh on June 13 between  2 p.m. and 6 p.m. View their Facebook event page here.

The 5th Annual Raleigh International Food Festival has decided to move their event to Saturday, Aug. 8 from noon until 10 p.m. in the 100-200 block of Fayetteville Street in downtown Raleigh. While there you will be able to try authentic international food, desserts as well as imported beer and wine! There will also be lots of music and entertainment at this child and pet friendly event. Admission is free and parking on the street is as well. Obviously, keep up with their Facebook event page for any announcements and/or rescheduling. Get all the details on their Facebook event page here.

The Fest in the West is back for its fifth year on Saturday, November 7 from 11 am- 5 pm at the USA Baseball National Training Complex in Cary. The event features food & beer, music, arts & crafts, a KidZone, contests and a petting zoo. A great way to spend time with 7,000 of your closest friends. Admission is free! Get all the details here.

The Food Bank of Central & Eastern North Carolina is providing free Grab-&-Go Meals for Kids & Teens Monday through Frida 11am – 1pm at the K&W Cafeteria located at 3620 Bastion Lane, Raleigh NC 27604. Children do not have to be present with you to pick up meals, and you will not be required to show ID. Food will be distributed by volunteers at curbside and social distancing will be practiced. There are also 30 other free meal sites across 15 counties! View a full list of sites here. #noonegoeshungry

Sean Lennard owns Triangle Food Guy, the only locally owned and operated corporate catering website, TriangleFoodGuy.com. As a native of Raleigh, Sean has been around the Triangle food scene for...well, a long time, but professionally since 2002 with the the Triangle Food Blog, formerly known as Friday Fun Food Facts, in 2008. You can find his blog here. And you don't have to wait until Friday for updates as you can follow Sean throughout the week on Facebook and Twitter.