Red Wolf pups: Four healthy, one in treatment, one deceased 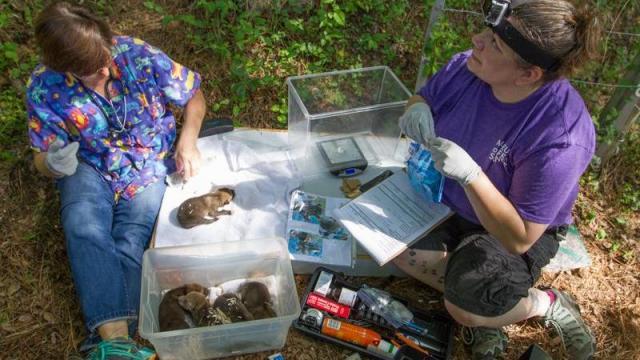 A sad, but hopeful update about the six red wolf pups born Friday at the Museum of Life and Science in Durham.

During their first hands-on veterinary checkup this week, four of the endangered red wolf pups were found to be healthy. In the last few days, they've gained 20 percent to 35 percent of their body weight and are starting to make little squeaks.

"They are robust and active with a strong sucking response and full bellies - all positive signs," said Deborah Vanderford, attending veterinarian for the Museum of Life and Science, said in a press release.

While all six pups were found to be healthy at birth with no congenital birth defects, during subsequent health checks one male pup was found to have paler mucus membranes and was pronounced dead on Monday, according to the release. A female pup is being treated for a foot abrasion, a serious, but not uncommon condition in red wolf litters. Newborn wolves are particularly susceptible to infections as a result of pad or paw abrasions, the release says.

The museum's animal care team is working with veterinarians and Red Wolf Species Survival Plan colleagues as they monitor and treat the pup.

"We started the female pup on long acting antibiotics and hope she will show signs of improvement, but we know foot pad issues in the first two weeks can be a serious concern," said Sherry Samuels, Museum of Life and Science's animal department director and member of the Red Wolf SSP Management Team, in the release. "The first 30 days are a critical and sensitive time for the pups; a death and an abrasion issue, while sad and difficult, are on par for what can and does happen with litters during this fragile time."

The five surviving and healthy pups - two males and three females - are nursing successfully. And mom is proving to be an attentive parent, the release says. This is the third time in 24 years that successful breeding of red wolves has occurred at the Durham museum.