No banjos, but there is a song and dance in the Supreme Court campaign 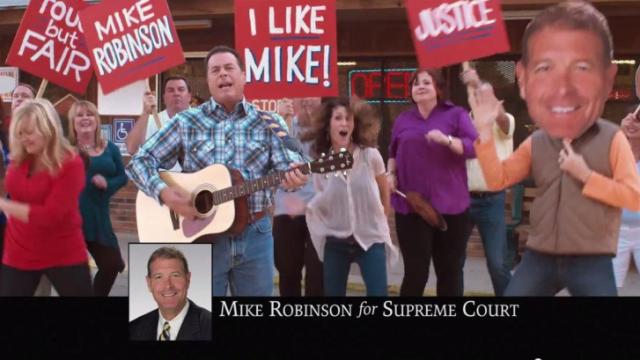 The ad boosting Robinson is reminiscent of "the banjo ad," which helped Associate Justice Paul Newby win election in 2012. That ad featured the same lead actor playing a banjo rather than a guitar. Both repeat the candidate's name against the backdrop of a folksy tune.

Supreme Court races are nonpartisan, but the party affiliations of the candidates are well known, and those running for the courts are increasingly getting support from both their parties and allied groups.

Documents filed with the Federal Communications Commission show that the Robinson ad will air in the Wilmington market and could be airing elsewhere in North Carolina.

As of Wednesday at 5 p.m., no television station had officially reported it would air the ad, but often those files lag behind what's actually on the air.

"We urge voters to say 'no' to the secret outside groups that are once again trying to buy our North Carolina courts," Hudson said during a news conference in Raleigh Wednesday.

Appearing with Beasley and and Sam Ervin IV, a Court of Appeals judge who is running for Supreme Court, Hudson said that the influx of outside money into the race was troublesome, regardless of whether the ads are positive or not.

"In North Carolina, voters are supposed to elect the judges. They're not supposed to be selected by some bunch of money being spent by groups from out of state whose identity isn't clearly disclosed," Hudson said. "That's a distortion of the way the process is supposed to work."

Ervin said that, given the recent history of independent spending efforts, there's no guarantee the ads will stay positive.