Outside groups poised to spend in high court races 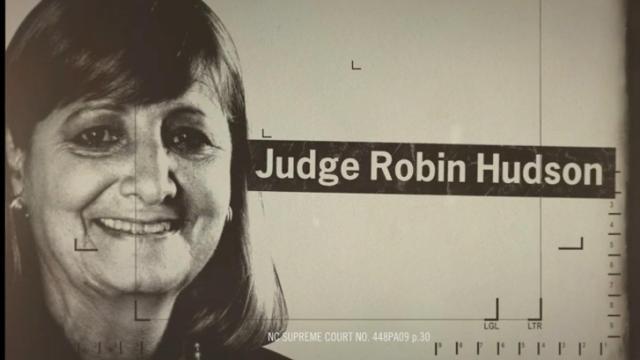 Raleigh, N.C. — The same political committee that aired an ad during the primary accusing state Supreme Court Associate Justice Robin Hudson of siding with child molesters has at least $425,000 to work with in the final week of the general election campaign.

Although third-party groups have largely stayed out of high court races this fall, at least two groups with ties to Republican causes appear to be gathering cash for last-minute spending.

Justice for All NC, a group that backs conservative candidates for judgeships, aired the much disputed child molesters spot in April. Hudson's opponent, Eric Levinson, described it as "unfair" during a discussion with reporters this fall.

Although judicial races are nominally nonpartisan, candidates' party affiliations are widely known. Hudson is a Democrat, and Levinson is a Republican.

Calls and emails sent to the North Carolina-based board members of Justice for All and to the Louisiana-based ad firm, Innovative Advertising, which served as the group's spokesman and media buyer earlier this year, were not immediately returned. As of 11 a.m. Tuesday, no broadcast television station has reported to the Federal Communications Commission that the group has purchased air time for this fall.

But around 1 p.m., WSFX, the Fox station in Wilmington, reported that Justice for All had bought commercial time through Innovative Advertising, the first of what is likely to be a statewide buy. The ad runs Wednesday through Monday – the day before Election Day.

"I have said that the ads were unfair. I have said that people should be positive and honest if they want to be involved," Levinson said during a discussion about his judicial campaign with reporters that was hosted by the University of North Carolina at Chapel Hill's Program on Public Life.

Thus far this year, candidates for the state Supreme Court have largely stayed away from personal attacks or criticizing their opponents' work, instead emphasizing their resumes and variety of life experience to delineate differences. Hudson points to the fact that she has already served a full term on the court and was a Court of Appeals judge before that. Levinson emphasizes the breadth of his experience, including working in Iraq and as a Superior Court judge.

Justice for All reported a $400,000 donation on Oct. 24 from the Republican State Leadership Committee, a group that helps elect GOP lawmakers, and a $25,000 donation from American Federation for Children, a group that advocates states to expand charter school and school voucher programs. A voucher program created by Republican lawmakers has been the subject of litigation in state courts.

The North Carolina Judicial Coalition, a separate group that was particularly active in the 2012 state Supreme Court race, has at least $110,000 on hand. Tom Fetzer, the group's director and a former chairman of the state Republican Party, did not immediately return calls seeking comment.

RAI Services, the parent company of tobacco giant R.J. Reynolds, provided $50,000 of the the Judicial Coalition's funding on Oct. 23. The group also reported to the State Board of Elections that the Charlotte Checkers minor league hockey team contributed $25,000 on Oct. 10. However, a lawyer for the group said that they are preparing an amendment to show that Michael Kahn, the owners of the Checkers, gave the donation as an individual, not the team itself.

Although the two groups are separate, Justice for All NC was a donor to the Judicial Coalition in 2012 when that group produced "the banjo ad" on behalf of Associate Justice Paul Newby.