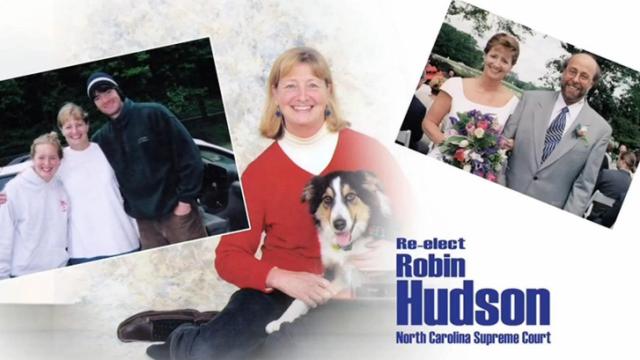 Raleigh, N.C. — State Supreme Court Justice Robin Hudson has survived a primary in which she faced a barrage of negative advertising that could have blocked her from competing to keep her seat this fall.

Unofficial returns show that Hudson was the top vote-getter in the three-way nonpartisan field. She will face Superior Court Judge Eric Levinson, who placed second in primary voting, in the general election.

Jeanette Doran, a lawyer who currently works for the state Division of Employment Security, placed third and was eliminated from the race.

"Our courts need to be selected by our voters, not bought by out-of-state, big-money interests," a relieved Hudson said Tuesday night.

Candidates and outside interest groups poured at least $1.5 million into the Supreme Court primary alone, which is highly unusual for a race that merely narrows down the number of contestants who will face off in the fall. Of that total, at least $1.1 million came from groups hoping to block Hudson from reaching the general election by pushing Doran and Levinson to victory.

State Supreme Court races are nominally nonpartisan, although the party affiliations of the candidates are well known. Often, political parties will line up behind certain candidates. This year, North Carolina Republicans asked their voters to choose Doran and Levinson over Hudson, a Democrat.

Much of the money spent fighting Hudson's re-election came through Republican channels.

The ad which put the race on the national map was aired by Justice for All NC, a group whose board members include tea party activists. It suggested Hudson is sympathetic to child molesters. The ad has been roundly decried as inaccurate by both former Supreme Court Justices and even some political conservatives, but neither Hudson nor her allies had the resources to answer back in kind.

Campaign finance reports show that $900,000 of the money Justice for All NC used to air that ad came from the Republican State Leadership Committee, a Washington, D.C.-based group that is funded largely by business interests, including Koch Industries, Time Warner Cable, SAS Institute and Reynolds American.

Hudson has served on the court for eight years and is a former member of the state Court of Appeals. Levinson is a former Court of Appeals judge who has served overseas as a justice attache to Iraq for the U.S. Department of Justice. Doran is the former director of the North Carolina Institute for Constitutional Law, a group linked to conservative causes that has brought lawsuits to derail legislation that oversteps lawmakers' constitutional authority.

"Our combined vote total tonight shows the strong desire of North Carolina voters for a conservative judge that is tough but fair," she said. "I offer him my full and unqualified endorsement and will be working hard for him this fall to help him secure a seat on the North Carolina Supreme Court."

Neither Doran nor Levinson disavowed the Justice for All NC ads. Both said instead that they were running their own campaigns.

On Tuesday night, Hudson said she was bracing for more attack ads this fall.

"I think we've seen the floodgates open with the outside money, and I don't have any reason to think it's going to stop unless it doesn't work," Hudson said.

She said her victory Tuesday was evidence that voters are growing suspicious of attack ads.

"I'm really grateful to all of my team, and to the voters all over the state who paid attention and voted on the actual facts," she said.