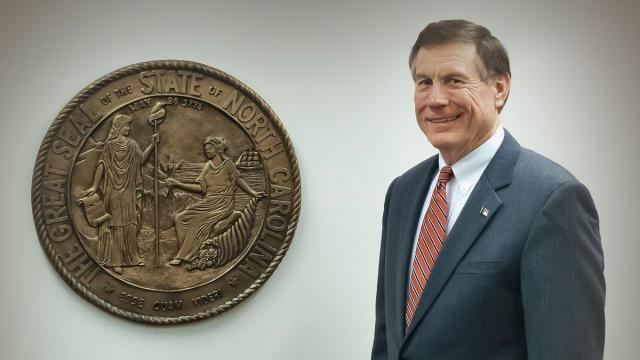 Raleigh, N.C. — State Insurance Commissioner Mike Causey said Wednesday that he's turned over a $240,000 campaign donation to the U.S. Marshals Service as part of an investigation into the state's largest political donor.

Causey said the hand-off wasn't part of a deal and that the federal government has not seized the money.

"Our campaign is simply sending them a check," he said.

The donation came from the North Carolina Republican Party, to which Durham investor Greg Lindberg has donated more than $1.49 million over the last year or so. That's just a portion of the $5 million-plus Lindberg has donated to political campaigns around the state, and he was the target of a subpoena that federal investigators served on Causey's Department of Insurance in September.

Lindberg had previously tried to donate directly to Causey's campaign, but the commissioner returned the money. A local Democrat filed a complaint with the State Board of Elections and Ethics Enforcement earlier this week alleging that the $240,000 the state GOP gave Causey's campaign earlier this year was an attempt to get Lindberg's money to Causey and to get around contribution limits that cap individual donations to political campaigns at $5,200 per election.

Causey said Wednesday that he had previously asked the FBI if he could return the $240,000 to the Republican Party.

"I was not allowed to send it back," he said. "I had asked before ... and I was told I could not. It was part of their investigation. Now, we've been cleared to get it back to the FBI."

It was not clear Wednesday why the FBI wanted the money. Causey said he assumes it's evidence, but Lindberg donated to the state party by check, campaign finance records show, and the party gave to Causey's campaign by electronic transfer.

Causey said his campaign has written a new check, made out to the U.S. Marshals Service in Charlotte.

An attempt to reach someone with the Marshals Service familiar with the case was not successful. An FBI spokeswoman did not immediately respond to an email seeking comment.

The subpoena indicates that a grand jury has been seated and that the FBI and the U.S. Attorney for the Western District of North Carolina in Charlotte are handling the case, but both agencies have declined to confirm the investigation's existence, which is standard practice.

Republican Party Executive Director Dallas Woodhouse said Wednesday evening that he was unaware of the development.

"We made a legal donation," he said. "What Mike Causey decided to do with it is up to him."

Causey said it was the FBI's idea that he send the money.

"I never said I wanted to give it to them," he said. "I had previously asked if it could be returned to the Republican Party and was told no, and then I was told where I could send it was to them. So, I followed their instructions."