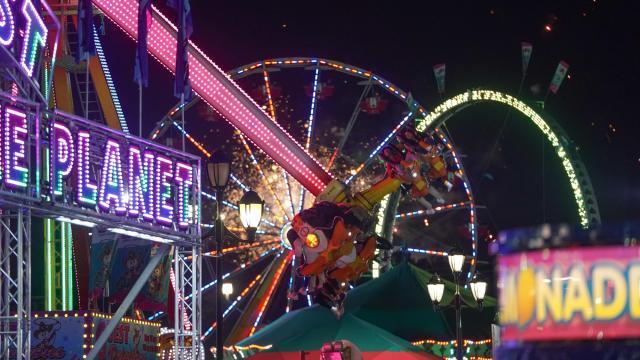 If the 2020 N.C. State Fair had gone on as planned this year, First United Methodist Church of Cary members would be celebrating 105 years of whipping up biscuits from scratch, drawing thousands to their spot for the flaky treats.

For more than a century, church members have made the biscuits by hand — as many as 4,500 in a day — and serving them up with ham or on their own. Proceeds from the booth go towards missions projects. State officials canceled the fair in July because of the ongoing pandemic. It would have opened Oct. 15.

"It's sad to not have it because those traditions are a big deal," said Kara Hand, whose family is behind the booth from the beginning.

But Hand and other members of the church's United Methodist Women group have cooked up a way to not lose some of the tradition—and still raise some money for missions.

They're offering an on-demand class that will give viewers step-by-step instructions on how to make biscuits just like the church has done at the State Fair for so long. (Biscuits kits, which included all of the ingredients except for buttermilk, sold out very quickly.) Access to the class is just $7, and proceeds also will support the church's missions. Orders must be placed by Oct. 9.

Hand, who grew up making biscuits at the fair, with relatives and at her family's grocery in west Raleigh, will demonstrate how to make the biscuits in the video. She'll be teaming up with her two daughters, ages 6 and 11. Organizers hope the virtual biscuit-making class inspires other families to spend some quality time together in the kitchen too.

"I'm excited to do it with them because it teaches them something too," Hand said.

According to a history of the booth on the State Fair's website, it opened in 1916 as a fundraising effort and made a profit of $13.32 in its first year.

In the beginning, Hand said, church members baked the biscuits at home and brought them to the fair. Later, in the 1940s and 1950s, Hand's great grandmother Mae Pleasants Jones actually brought her own stove to the fair for two weeks to make biscuits.

Now the church has a booth along the fair's restaurant row with a full kitchen and seating for customers. From there, church members work in three shifts a day, making 1,200 to 1,500 biscuits per shift. Some customers will come in two hours early and order 50 biscuits to take away, she said.

"It's always packed," said Hand of the booth, which is known as the home of the "original country ham biscuit" at the State Fair.

Running the booth is a church-wide affair. Each year, the church holds biscuit-making classes, so they have the hands required to respond to the demand. Members make the biscuits and cook the ham. Church youth help serve customers.

Hand has worked pretty much every job at the booth, but making biscuits is a favorite. She often works a shift with her cousin and 96-year-old aunt. Last year, her older daughter got to be a waitress for the first time and was thrilled about it.

"My worry is that if this continues, do we have a fair booth next year and [if not], do the youth forget how to work the fair?" Hand said. "It's important. These are the things you don't want to lose."

That's why she's excited to find another way to get church members involved in biscuit making, even without the traditional fair and as some older members aren't able to see extended family and friends because of COVID-19. In the biscuit kits, which sold out, Hand is working to gather handwritten note from older church members to include. "We're really excited about that," she said. "We're trying to find ways to include all of our members, even those who can't come out."