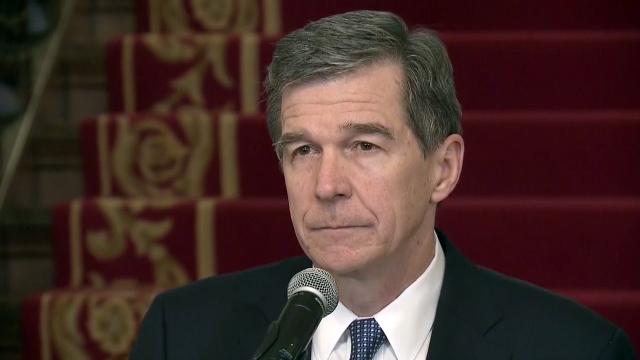 Raleigh, N.C. — In his largest set of vetoes to date, Gov. Roy Cooper rejected seven bills late Monday, including one changing early voting schedules and a second that would insulate hog farm operators from nuisance lawsuits filed by neighbors.

Lawmakers are expected to hold override votes on all seven this week.

Senate Bill 325 sets up a 17-day early voting period that runs from mid-October to the Friday before Election Day, eliminating voting on the final Saturday before Election Day. It also would require all early voting sites to be open 7 a.m. to 7 p.m. on weekdays during the period. Counties could set their own weekend hours, but all sites would have to be open those hours.

"Previous attempts like this by the legislature to discriminate and manipulate the voting process have been struck down by the courts. True democracy should make it easier for people to vote, not harder," Cooper wrote in his veto message.

Supporters said the proposal would make early voting easier by setting consistent schedules and having all sites open at the same time. But opponents said requiring counties to have sites open 60 hours a week, especially on days that are historically slow for early voting, would likely force counties to open fewer sites overall and skip weekend voting.

The annual Farm Act was one of the most debated measures this session, including fights over what can be called "milk" and the legislative pushback following a $50 million judgment some Bladen County residents won in federal court in April against the hog-production arm of pork giant Smithfield Foods. The neighbors complained that the odors, insects and vermin associated with nearby Smithfield farms hurt their property values and quality of life.

A provision was included in the bill to limit such lawsuits in the future – about two dozen are still pending in federal court – by including restrictions that prevent anyone who lives more than a half-mile from an alleged nuisance or anyone who moved in after farm was in operation from suing. The bill also prevents punitive damages, which was the bulk of the April judgment, unless a farm's operation had led to a criminal conviction or a civil penalty by regulators.

"While agriculture is vital to North Carolina’s economy, so property rights are vital to people’s homes and other businesses," Cooper wrote in his veto message. "North Carolina’s nuisance laws can help allow generations of families to enjoy their homes and land without fear for their health and safety. ... Our laws must balance the needs of businesses versus property rights. Giving one industry special treatment at the expense of its neighbors is unfair."

Larry Wooten, president of the North Carolina Farm Bureau, was quick to express disappointment over the veto.

"The bill contains many common sense ideas that will provide North Carolina’s farmers with certainty in a turbulent environment," Wooten said in a statement. "Farmers deserve to know what they can and cannot do without the fear of a lawsuit driven by out-of-state interests. The Farm Act is a good bill that deserves bipartisan support. We hope the Legislature will act promptly to override the veto."

The other five vetoed bills are as follows:

Midnight Monday was the deadline for the governor to take action on the final set of state policy bills lawmakers sent to him. He has no say in the local bills and constitutional amendments lawmakers have been discussing over the past week.

He also signed 32 bills Monday, including measures that change funeral regulations to allow stillborn twins to be cremated at the same time; increase the penalty for threats at schools and places of worship; create a tracking system for rape kits in evidence at law enforcement agencies statewide; and charge inmates with a felony for exposing themselves or throwing bodily fluids at prison workers.

Three other bills were allowed to become law without the governor's signature, including one allowing landlords to recover their costs in eviction cases.

Before Monday, Cooper had vetoed 16 bills in his 18 months in office. Lawmakers have overridden 13 of them.