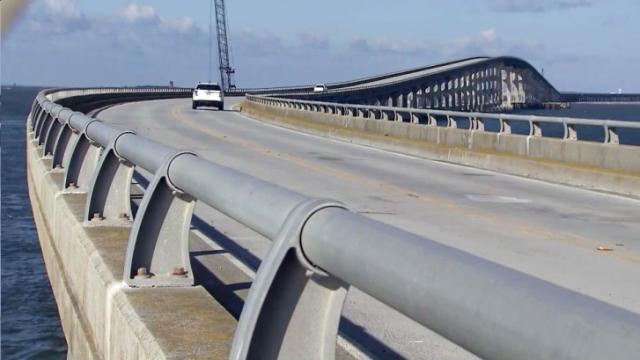 The dispute centers on a plan to replicate the existing 2.5-mile Bonner Bridge across Oregon Inlet at a cost of $216 million. The bridge is the only span connecting the mainland to Hatteras Island and was designed to last 30 years when built in 1963.

Construction has been blocked by a lawsuit by environmental groups, who favor a 17-mile bridge that would bypass the Pea Island National Wildlife Refuge. The route favored by environmentalists would require building the second-longest bridge in the United States at a cost of more than $1 billion, state transportation officials said.

Environmentalists counter that changing the route would also help avoid recurring problems with the current road, which is frequently rendered impassable by water and sand kicked up by storms.

"At the heart of this case are the past and future of the Outer Banks," Judge James Wynn wrote for the three-judge panel of the 4th U.S. Circuit Court of Appeals in Richmond, Va. "The effects of time threaten the structural integrity of the Bonner Bridge, while large storms and changing coastal conditions threaten the viability of the non-elevated portions of North Carolina Highway 12 south of the Bonner Bridge."

The North Carolina Department of Transportation focused on the portion of the appellate court decision that upheld a lower court ruling that the state complied with the National Environmental Policy Act in proposing the replacement bridge as the least environmentally harmful alternative.

"With a second court now ruling that NCDOT complied with the National Environmental Policy Act, we’re hopeful the (Southern Environmental Law Center) will drop its remaining lawsuits so the state can move forward in building the vital Bonner Bridge replacement for the citizens and visitors of the Outer Banks," DOT spokesman Mike Charbonneau said in a statement.

Transportation Secretary Tony Tata last year described the SELC as "ivory tower elitists." The center's attorneys were fighting in court "with their lattes and their contempt, and chuckle while the good people of the Outer Banks are fighting hard to scratch out a living here based on tourism and based on access," Tata said.

SELC attorney Julie Youngman countered that Tata was distracting people from the DOT's failure to plan a reliable route that would not be repeatedly washed out in coming decades.

Opponents to the replacement bridge have argued that the state's plan leaves out the cost of moving or maintaining about 12 miles of N.C. 12 through the wildlife refuge. The highway has been breached by new inlets twice in the past several years. Environmentalists said the shorter bridge will be useless without additional infrastructure construction.

The road was closed for three days early last month after waves churned by Hurricane Arthur caused a small section of the fragile roadway to buckle. The bridge was closed for nearly two weeks in December because sand had washed away from the bridge supports.