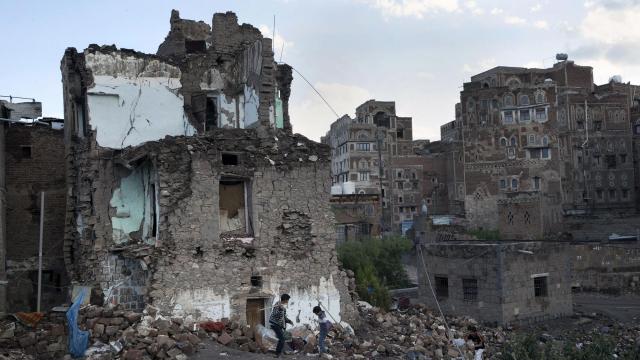 WASHINGTON — The Trump administration is preparing to end air refueling flights for the Saudi Arabian military campaign in Yemen and impose sanctions against Saudis linked to the killing of Jamal Khashoggi, current and former U.S. officials said Friday, moves that impose a limited punishment on the kingdom.

The steps appear calibrated to respond to international outrage over Khashoggi’s death and to thousands of civilian deaths in the Yemen war but avoid directly punishing the Saudi crown prince, Mohammed bin Salman, and could head off tougher congressional action.

Khashoggi, a critic of the Saudi government who wrote for The Washington Post and lived in Virginia, was killed last month in the Saudi Consulate in Istanbul by what the Turkish government has described as a kill team dispatched from Riyadh, the Saudi capital. President Donald Trump has called Khashoggi's killing a “very sad thing, very terrible thing,” but his administration has signaled it intends to continue working with Crown Prince Mohammed. Jared Kushner, Trump’s son-in-law and senior adviser on the Middle East, is the prince’s biggest supporter in the White House.

Saudi Arabia is expected to announce next week that it will no longer use U.S. aerial refueling planes, a move the Pentagon will reinforce. A Pentagon spokeswoman declined to comment.

The Trump administration is also expected to soon announce economic sanctions against Saudi officials linked to Khashoggi’s murder, according to current and former officials. They said senior officials at the White House and State and Treasury departments had discussed imposing the sanctions under the Global Magnitsky Act, which gives the executive branch the power to punish foreign officials involved in human rights abuses. The announcement could come in days.

Last week, Defense Secretary Jim Mattis and Secretary of State Mike Pompeo called on all sides in the war to end hostilities and take part in U.N.-led negotiations. But Saudi leaders did not immediately move to limit their airstrikes, angering some in the Trump administration, according to former officials.

“The Saudis have escalated; they have intensified the war,” said Bruce Riedel, an expert on Saudi Arabia at the Brookings Institution. “It is a very public rebuke of both the secretary of state and the secretary of defense by the Saudis. The administration has not said anything about that. But curtailing air refueling would be their response.”

The U.S. support for the Saudi-led war in Yemen has been deeply controversial, especially as civilian casualties have mounted — many children are among the victims — and a famine resulting from the war has gripped the country.

The administration has faced growing bipartisan criticism over the U.S. military’s support for the Saudi campaign. On Friday, Sens. Todd Young, R-Ind., and Jeanne Shaheen, D-N.H., called for an end to the air refueling mission.

“If the administration does not take immediate steps, including ending U.S. refueling of Saudi coalition aircraft, we are prepared to take additional action when the Senate comes back into session,” the senators said in a statement.

The U.S. military is considering other measures to try to help blunt the excesses and missteps of the Saudi military conducting the war, including prodding Riyadh to tighten its rules of engagement and improve its targeting.

But the problem for the Saudi military is that after missiles fired from Yemen strike near Saudi cities, the kingdom’s leaders demand immediate reprisals. Senior U.S. officials said they hoped they could persuade the Saudi military to exercise more discipline and care.

Officials said the ending of the refueling was not directly related to Khashoggi’s killing inside the Saudi Consulate in Istanbul. But some current and former officials said the rising pressure by the United States for Saudi Arabia to de-escalate the war was unlikely to have been as strong except for the outrage over Khashoggi’s death.

Since the beginning of the Saudi war in Yemen, the U.S. military has been conducting air refueling missions to aid the offensive. Last month, Mattis said only about 20 percent of Saudi sorties used U.S. refueling aircraft.

In September, Pompeo provided formal certification saying that Saudi Arabia and the coalition it was leading in the Yemen war were taking significant actions to limit harm to civilians. The certification is needed for the U.S. military to refuel aircraft from the Saudi-led coalition. A congressional act passed in August requires the United States to provide certification every 180 days.

Pompeo faced significant resistance to the certification from several bureaus inside the department, including from the Near Eastern affairs bureau.

In his late October speech, Mattis set a deadline for an end to the violence. “Thirty days from now, we want to see everybody around a peace table based on a cease-fire, based on a pullback from the border,” he said.

The sanctions expected to be announced soon follow minor punishments that Pompeo laid out last month. In late October, he said the United States was gathering information on what happened to Khashoggi and the role of Saudi officials in the murder.

He announced at the time that the United States was putting 21 Saudis on a visa blacklist or canceling visas they held. Those 21 presumably included 15 Saudi citizens whom Turkey had named at the time as being involved, as well as Saudi officials who were dismissed from their posts that month.

“These penalties will not be the last word on the matter from the United States,” Pompeo said at the time.

It is unclear to what degree the targets of the coming sanctions will overlap with the 21 on the visa blacklist.

On Oct. 10, bipartisan leaders of the Senate Foreign Relations Committee wrote to Trump demanding an investigation into Khashoggi’s death, including whether “the highest-ranking officials in the government of Saudi Arabia” were involved. The 22 members of Congress who signed the letter said the Trump administration should use the Global Magnitsky Act to impose sanctions on those involved.

The prospect of Saudi sanctions was raised at an internal Treasury Department meeting Thursday when Treasury Secretary Steven Mnuchin was asked how the administration planned to respond to the killing. A Treasury employee in the room said Mnuchin lamented the horrible nature of the killing and suggested that some action was likely to be taken in the next week.

A Treasury spokeswoman confirmed the subject had been discussed at an internal meeting but disputed that account, saying that the secretary made no such promise.