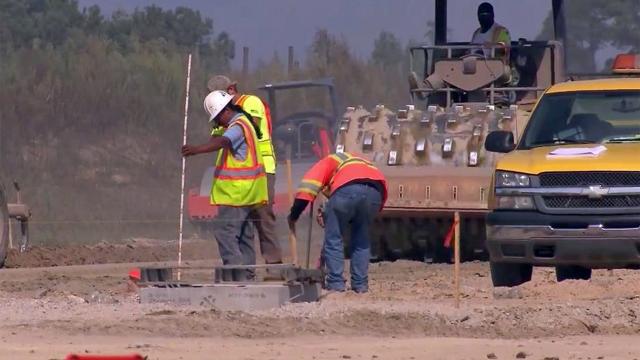 Raleigh, N.C. — Both Senate President Pro Tem Phil Berger and House Speaker Tim Moore said Tuesday that any bond package that comes out of the General Assembly this year will likely be smaller than the $3 billion sought by Gov. Pat McCrory.

The governor has pitched a bond package that would be divided roughly evenly between borrowing for road and bridge improvements and building new university buildings, expanding parks and making other investments in state infrastructure.

Senators, he added, believe that changes to the gas tax and other transpiration funding sources could be made to pay for the same type of road improvements envisioned by McCrory's bond package without borrowing. He did not specify what that might be.

"We think there's a way to get dollars into transportation from current transportation taxes that will address the funding issues that would be satisfied by the bonds on a short-term basis but satisfy them on a long-term basis," Berger said.

Moore, R-Cleveland, said that, while there are some House lawmakers who might favor transportation bonds, the package would be much smaller than what the governor proposed.

"There are those who say you can reshuffle what we already have in transportation," he said. "I don't know. I think perhaps some bond package would be in order there. But the bigger number, the larger figure on the bond, would probably need to be on the capital side."

Those coments on the transportation bond drew criticism from Transportation Sec. Tony Tata, who has taken a lead roll in pushing the bonds for the governor.

"Other transportation funding reform being discussed in the General Assembly would compliment but not replace the bonds," Tata said in an email. "The infrastructure bonds will help the state add 27 new roads faster to connect people and freight, invest in our ports and rail to strengthen our state's economy, support other modes of transportation and pave 176 unpaved roads across the state. Legislators are proposing funding reform that would support important transportation maintenance and operations needs, but it would not fund new construction like the bonds."

Both Berger and Moore said their respective chambers are more supportive of bonds that could be used to build new state buildings.

That said, there are still big questions surrounding any bond package.

"I don't think we're even close on any particular list of non-transportation items," Berger said Tuesday morning after addressing a lobby day for the National Federation of Independent Businesses.

He pointed specifically to university and state government buildings.

"Some folks really think we need to double down on transportation; others folks lean more toward the capital side," Moore said after the NFIB meeting. "Then, on the capital side, there are those want to really deal with repair and renovation, and I don't see a lot of support for that. I think, if you're talking about a bond proposal, it needs to be new construction because you're talking about 20- and 30-year financing. It needs to be a project or a building that will be around 20 or 30 years, not a new air conditioner."