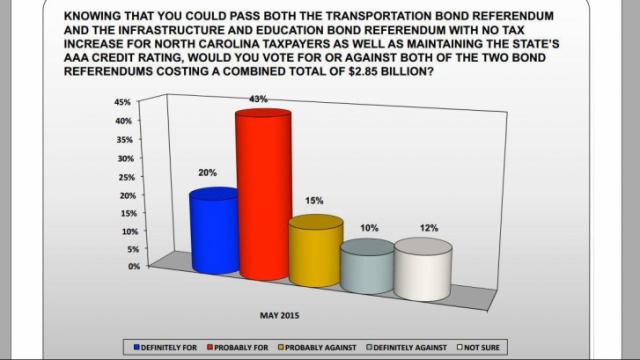 Raleigh, N.C. — North Carolina voters would likely back a pair of bond issues that would pay for transportation projects and state building improvements, according to a survey by TelOpinion Research conducted for the Renew North Carolina Foundation.

Renew North Carolina is a 501(c)(4) group formed three years ago to tout Gov. Pat McCrory's policy agenda. McCrory, a first term Republican facing re-election in 2016, has been pitching lawmakers on a pair of bond referendums. A $1.4 billion transportation bond would pay to update, expand and repair roads and bridges. A second bond of roughly the same size would pay for improvements to university buildings and other state-owned infrastructure, including parks and court buildings.

Lawmakers, particularly in the Senate, have been reticent to embrace the bond packages. But the poll results show that 63 percent of voters would either "definitely" or "probably" vote for both bond issues, with 12 percent unsure.

"It's fairly evident that across demographic groups that North Carolinians would like to do both of these bonds," said Bill Lee, president of TelOpinion research.

Lee said he was surprised by how strong the results were.

The results, he said, held across demographic groups. More than half of the 1,000 survey participants reached May 14 through May 19 said they were either somewhat or very conservative. All respondents were part of a sample that had voted in either the 2012 or 2014 general elections.

McCrory and Art Pope, the governor's former budget director and an active political donor and advocate, presented the survey to a joint meeting of House and Senate Republicans last week.

Rep. Charles Jeter, R-Mecklenburg, said he wasn't swayed by the polling data. As Republican conference chairman, Jeter is responsible for the House Republicans' political operations, but he said the case for the bonds is less political than it is practical.

"I think the better case for the governor's bond package is the need for it, the value to the state," Jeter said. "The best selling point is that this is something the state sorely needs."

As well, Jeter argued, Lee Roberts, McCrory's current budget director, makes a compelling case that this fall is the opportune time to borrow, a point at which the cost of borrowing $3 billion will be relatively cheap versus the long-term value of the projects funded by the bonds.

"At the end of the day, all the governor is really asking is to let the people decide," Jeter said.

If the General Assembly were to approve the bonds, they would be placed on a referendum that must pass a vote of the people.

"There's no better poll than a vote in November," Jeter said.

Other highlights from the TelOpinion survey included: