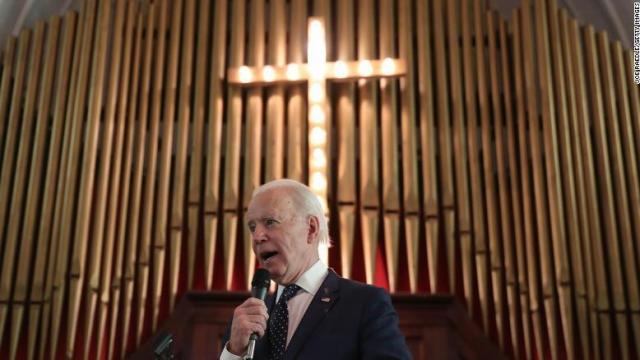 EDITOR'S NOTE: Nicholas Kristof is a columnist for The New York Times. He has won two Pulitzer Prizes, for his coverage of China and of the genocide in Darfur.  His latest book is "Tightrope: Americans Reaching for Hope."

A granddaughter of the Rev. Billy Graham, Jerushah Duford is a committed evangelical Christian who describes herself as “pro-life.” For most of her life, she voted Republican. Yet this year, she is voting for Joe Biden and is encouraging fellow Christians to distance themselves from a president who she says is trying “to hijack our faith for votes.”

She made clear to me that she is not speaking for her grandfather, the famous evangelist who died in 2018. But she added: “I think he would be sad. I think his greatest desire had nothing to do with policies but to introduce people to a loving Jesus, and the division this administration has caused I believe has hurt this effort.”

In one sense, Duford is an outlier. About 8 of 10 white evangelicals voted for Donald Trump in 2016, and polling suggests that the great majority will vote for him again in 2020. But Duford is part of a broader movement among some evangelical leaders to distance their faith from Trump, which in turn means interpreting “pro-life” in a broader way. In a sign that some evangelical voters are in play this year, the Biden campaign is advertising heavily on Christian radio stations.

“Mr. President, the days of using our faith for your benefit are over,” declares a video from a Christian group called Not Our Faith. “We know you need the support of Christians like us to win this election. But you can’t have it.  Not our vote.  Not our faith.”

The Rev. John Huffman, who once was President Richard Nixon’s pastor, said he has voted Republican all his life but has now joined a group called Pro-Life Evangelicals for Biden. He said he prays for Trump but sees him as “an immoral, amoral sociopathic liar who functions from a core of insecure malignant narcissism.”

Huffman and others say they are speaking up partly because they fear that Christianity is tarnished and losing ground in the United States because of the strong support Trump receives from many evangelical leaders. (One of them is Duford’s uncle, Franklin Graham, who has claimed that Billy Graham voted for Trump in 2016.) Duford told me her message to the public is, “I’m sorry you have witnessed the same greed and hypocrisy in the church that you see in the world, but this is not what Jesus is about.”

There’s nothing inherently conservative about evangelical Christianity, for Black evangelicals mostly vote Democratic and there is a long tradition of liberal evangelicals from Martin Luther King Jr. to Jimmy Carter to the writer Jim Wallis. But in recent decades, white evangelicals have mostly voted Republican, and Duford and others engaged in the new outreach acknowledge that many find it somewhere between scary and unthinkable to break that tradition.

A huge obstacle for many evangelicals considering a vote for Democrats is abortion policy. So a particularly important part of the upheaval now underway within evangelical ranks is a move to redefine “pro-life” to apply to more than fetuses.

The progressive outreach to evangelical voters also argues that as a practical matter, abortion rates fall more during Democratic administrations than Republican ones, a claim that has some basis but tends to be exaggerated. It is true that one of the most effective strategies to reduce abortion numbers is to provide comprehensive sex education and family planning, to reduce unwanted pregnancies. For example, countries with free, legal abortion, like the Netherlands, have substantially lower abortion ratesHistorical abortion statistics, Netherlands than the United States.

“A growing number of Christians have realized that their religious beliefs concerning the sanctity of life can be advanced in practical ways other than simply voting for conservative judges to make abortion illegal,” said Deborah Fikes, a former evangelical leader in Texas who became so disillusioned by policies of the American Evangelical Church that she left and joined the Methodist Church. Evangelical churches, she said, have mistakenly pursued a harmful “strategy of political gain in Jesus’ name.”

A similar ferment is apparent among Catholics. “I am voting for Joe Biden because I am pro-life,” a Catholic nun, Sister Mary Traupman, wrote to The Pittsburgh Post-Gazette. Describing family separation at the border, environmental degradation, denial of health care to the poor, she added, “ These are not pro-life policies.”

The Rev. Greg Boyle, who runs programs for gang members in Los Angeles, told me something similar. “I have never endorsed a candidate in any race until now,” Boyle said, but now he endorses Biden. “This is a vote for the soul of the nation,” he added. “I’ve never seen an existential threat like this in my 66 years of living.”

“This is not about partisan politics,” he said. “It’s about truly choosing life.”