Sewer water floods Raleigh home, 5 On Your Side shares how to prevent it

Raleigh, N.C. — Thousands of gallons of sewage – wastewater from toilets, showers, washing machines and dishwashers in her Raleigh neighborhood – backed up into Laurie Snyder's home on Northbrook Drive.

"It was everywhere," she said homeowner Laurie Snyder.

Sewage came in through Snyder's first-floor toilet, flooded that bathroom, the hallway, the kitchen, even bubbled up into her kitchen sink. 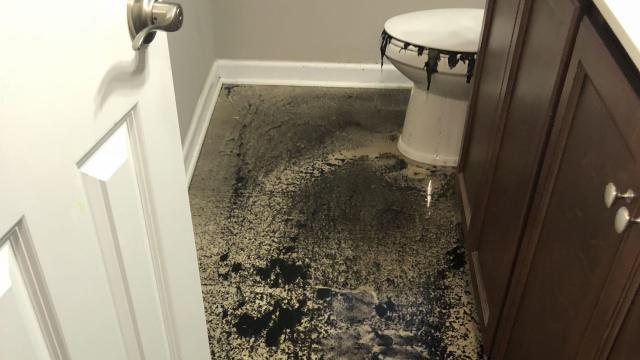 "It was horrifying," she said. "It was filthy."

Snyder took video with her phone that showed filthy water pouring out of an HVAC vent that a repairman had slit with a knife. The dark gray water seeped into her drywall, flowed into her HVAC vents then flooded her her finished basement.

"When my son came in, his foot just went squish, squish. There was that much water in this carpeting," Snyder said.

Although Snyder didn't cause the problem, she was left to pay tens of thousands of dollars for the clean-up and repairs!

"This is especially problematic in older neighborhoods especially ones that are hilly that have areas where a sewer is basically above your house," said Ed Buchan with Raleigh's Public Utilities department.

Buchan says while cases like Snyder's are rare, clearly they happen.

He says those who live in a home located downhill from the sewer main, and built before plumbing codes were changed to require a backwater valve, are most at risk.

That code change took effect in Raleigh in 2000. A backwater valve, which can cost up to $2,000, helps prevent wastewater from flowing back into a home.

"There might be some upfront cost," Buchan said. "But the benefit is significant."

Snyder had never heard of a backwater valve.

Surprising, she says, not only because her home is older and located downhill from the street, but also because almost four years ago, she had to rebuild after a house fire.

"No plumber, no city inspector advised me that I needed to have this in my yard," Snyder said.

"When I was moving back into the house, what's another couple thousand dollars, you know," she said.

Especially considering the cost to clean up and repair from all the sewage will top $45,000.

City crews determined the problem started just up the road from Snyder's house when grease clogged the sewer main. For that reason, the City of Raleigh denied her claim for damages, saying a grease blockage is not the city's fault.

Although many don't realize it, property owners also own the pipes that bring water and wastewater to and from their home and any problems that arise.

"A service line is your responsibility," Buchan said. "It's on your property. It's part of your building structure. Same with the water service line. From that water meter to your house is yours."

The city checks sewer lines. However, homeowners who notice a problem, like a slow flushing toilet or slow drain, should get it checked out. It could be a sign of a bigger problem. 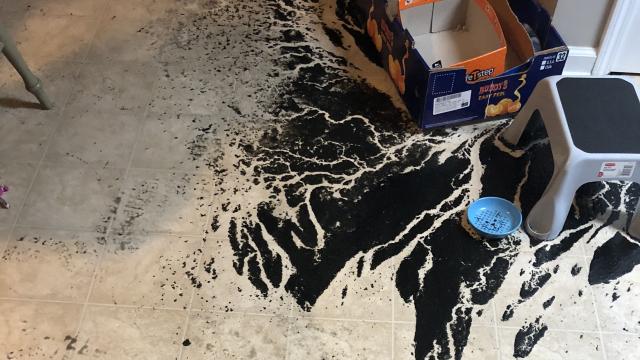 "It wasn't nearly a drop in the bucket to help me fix it," she said.

That's because most standard homeowner insurance policies don't cover sewer back-ups. Homeowners can pay extra for coverage, which Snyder says she actually did on a fluke. But it still wasn't enough.

So for now, her unfinished bathroom, laundry, kitchen and basement will stay that way, with drywall not yet installed and cabinets not yet reattached.

Snyder says she also can't afford to replace her HVAC.

All because of a huge, filthy sewage mess that could have been prevented with a device the size of of a backpack.

"I want people to know that they need to have this," Snyder said of the backwater valve. "And it's not a joke and don't think that it can't happen to you, because it can happen to you."