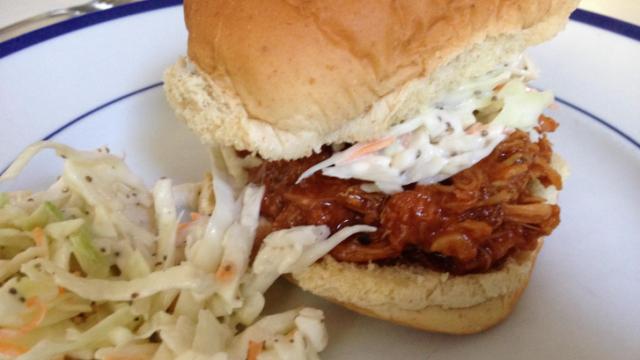 I almost didn't try this recipe, which I found in the September issue of Family Circle magazine, since I've had a lot of bad luck cooking chicken in the slow cooker.

It always comes out dry or rubbery or with some other odd texture. I usually stick to beans, soups, stews and sauces in the slow cooker. But I had a bunch of chicken thighs and wanted to do something new with them. I also have a daughter who loves pulled pork sandwiches, so I thought this would be right up her alley.

The recipe really does include a can of root beer. And the chicken does come out sweet and tasting like root beer. To cut down on the sweetness, especially considering how sweet the sauce is, I might substitute part of that root beer for water or chicken broth. I also didn't use the liquid smoke that this recipe calls for.

And to cut down on that odd texture, instead of cooking the chicken for a full six hours, I cooked it on high for a little less than four hours. The chicken shredded well, but also was still very moist and not rubbery.

I served the pulled chicken on a bun with my own homemade coleslaw.

While that's cooking, heat the vegetable oil over medium high heat. Add the onion and cook until it's gold. Then add the remaining ingredients. Let that simmer with a cover on it  for about 10 minutes. Stir the sauce from time to time.

Once the chicken is done, keep a 1/2 cup of the cooking liquid and throw the rest away. Shred your chicken and stir it into the sauce and reserved cooking liquid (if needed for moisture. I ended up tossing it). Serve on buns with the coleslaw.