Hillsborough, N.C. — In May 2017, an assistant principal entered a boys' bathroom at Cedar Ridge High School in Orange County. There, scrawled on the wall, was a threat: "Kill all (racial slur)." He soon found similar graffiti in other bathrooms. Swastikas and slurs littered the walls.

A few months earlier, a Cedar Ridge High teacher heard a student yell "white power!" as they walked to the bus, but she couldn't make out who it was. Back in her classroom, she found a swastika scratched into a desk in her classroom.

That same school year, a student sitting at a cafeteria table at C.W. Stanford Middle School in Hillsborough announced that President Donald Trump "was going to deport all blacks back to Africa since he was president."

"You going to get deported," a student told a classmate. The conversations were so upsetting to one student, they went home early.

During the 2016-17 school year, Orange County school leaders recorded 70 incidents at their middle and high schools involving racist threats, political feuds about Trump, clashes over the Confederate flag and other similar fights. They documented the incidents in a report known internally as the "confidential student-specific incidents data," which noted the date, what happened and the consequences.

Orange County Board of Education members reviewed the document in closed session in May 2017 but didn't release it publicly.

WRAL News requested a copy of the document this past spring after discovering it existed. Several months later, the school district released the five-page document with numerous redactions, citing student privacy. Of the 70 incidents, 16 are completely redacted and 24 are partially concealed.

The document has never been shared publicly until now. Its existence has prompted several questions: Why did Orange County Schools collect this data when other local school systems did not? Why did they not share it publicly? What did they learn from it? And why have they stopped collecting it? 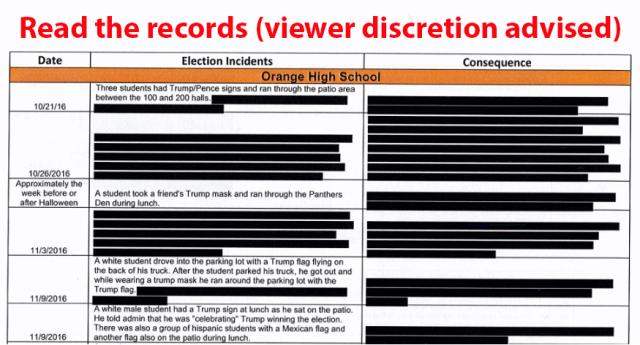 Orange County Schools Superintendent Todd Wirt said he and his staff collected the information during the 2016-17 school year at the request of the school board, and they discussed it privately in closed session later that school year.

"This wasn't about the district hiding this information," Wirt said. "It was about protecting the students that were on the particular document and providing our board with accurate information to help them make a really difficult decision."

That difficult decision, Wirt said, was whether to ban the Confederate flag on school grounds.

Last August, the school board decided to ban all clothing depicting the Confederate flag, swastikas or any KKK related symbols or language. The decision came after months of pressure from parents and students who urged the school system to change its dress code.

Before making a decision, the board wanted an accurate count of issues stemming from the Confederate flag and racial and election-related incidents in schools, not just anecdotes from a handful of people, according to Wirt. The superintendent assigned the task of collecting the incidents to Jason Johnson, his executive director of schools.

"Basically, each [school] administrative team, they just kind of kept the incidents in a spreadsheet and then I just ran around and got it from them so I could collect it and put it all in one location," Johnson said.

"We reached out to our elementary principals and, at the time, honestly, we just weren't seeing those same types of behaviors at the elementary level," Wirt said.

After collecting the reports from middle and high schools, Johnson scanned the pages. The stories of students' hateful language and actions saddened him but didn't surprise him, he said. He was already aware of some of the stories through his work with the schools' principals. But others were new.

"You know, I’m an African-American male, so I’m probably a little bit more hurt than anything," Johnson said. "I think it’s just very painful that we have a few kids – and I do mean a few – that will say some of the things they said or do some of the things they’ve done. But I also know that’s an opportunity to teach."

The stories didn't surprise the superintendent, either.

"This is year 20 for me in public education. I was a high school principal for quite some time. I don't know that surprise would be the right word," Wirt said. "I honestly was probably most surprised by some of the responses and animation around the election, more than anything from the document."

The records captured multiple feuds between students over the election of Trump and some displays of support for his victory.

One day after the election, four students walked the halls of Gravelly Hill Middle School chanting "build a wall" within earshot of Hispanic students. That same day at Orange High School, a white student pulled into the parking lot with a Trump flag flying on the back of his truck. He got out and ran around the parking lot with the flag and a Trump mask on his face.

A few days after the election, a parent emailed Orange High School leaders regarding "a negative comment that a teacher had made about the type of people who voted for Trump." And on a bus ride from C.W. Stanford Middle, a student called others "white crackers and Trump voters."

In Johnson's time leading schools, it has "never been this way around election time."

"I don’t remember anything that compares to it," he said. "I was a principal when we had the first black president, and we didn't have anything like this."

Public schools in North Carolina are not required to track specific data about election and Confederate flag incidents, according to the state Department of Public Instruction. WRAL News emailed several local school systems to see if they collected any data similar to Orange County's.

"We do not collect data on the categories you've detailed," wrote Lisa Luten, communications director for the Wake County Public School System.

"According to our security director, we do not collect [those] specific incidents," wrote Chip Sudderth, chief communications officer for Durham Public Schools. "Incidents of that nature would be identified as disruption of school, dress code, etc. to match Board policy."

Efforts have been made to track hate crimes and similar incidents in schools nationally. Earlier this month, Education Week released a report called "Hate in Schools," which tracked nearly 500 accounts of hate and bias in K-12 schools in the United States during a three-year period.

"Most of the incidents – some of which were formally reported to school personnel – involved hate speech, spoken and written. Reports of bodily harm were relatively rare," Education Week found.

In Orange County Schools, few incidents led to physical fights. Most were verbal or involved graffiti, but it's unknown what the redacted incidents included.

Orange County parent Latarndra Strong has been tracking Confederate flags in schools and similar incidents through a group she formed called the Hate-Free Schools Coalition. More than 125 people joined her group within the first few months of its launch during the 2016-17 school year, and membership has now grown to more than 300, she said.

Records collected by Orange County Schools showed some students brought full-size Confederate flags to school and wore them like capes around the lunchroom.

After hearing similar concerns from other parents, Strong formed the coalition and continued pushing school leaders to ban the flag.

"When I first wrote the letter to the school asking them to ban the Confederate flag, one of the overarching themes that I heard over and over again was let the sleeping dog lie ... don't ruffle feathers, just kind of pretend that these things aren't happening," she said. "The problem is that the kids know, right? And the kids are experiencing this frequently and they're going to school in this environment and we're all pretending that we live in a post-racial environment."

Strong, who serves on Orange County Schools' new Equity Task Force, said she had no idea the school system was collecting reports about Confederate flag, racial and election incidents until a WRAL News reporter showed her the document this summer.

The document was not shared with the group, the superintendent said, because it contained confidential student information. Wirt said he mentioned the document in a public meeting and gave a summary report about it, but he could not recall the exact date due to the amount of time that has passed.

Orange County Schools has since stopped collecting the data.

"We have so many other sources of data and so many other ways that we collect discipline data that I think this data at that time was informing a very specific decision that needed to be made by our board," Wirt said. "I think the data that we're very focused on right now as a school system is what I mentioned earlier with an overrepresentation of students of color in our suspension data and our challenge and our charge to change that and to have a more equitable system when it comes to how we respond to students when they make bad choices."

In a Facebook post last month, the superintendent addressed the work being done by the Equity Task Force and the changes being made. 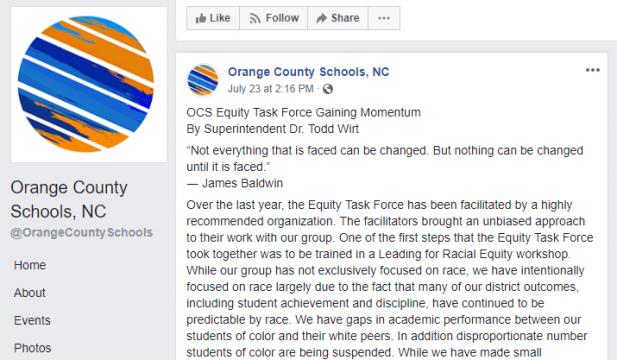 "I'll be the first to say, and have since I got here, that our data tells us that we have a lot of work to do from a discipline standpoint in our school system," Wirt said. "We have an overrepresentation of students of color being suspended in our school system. We share that data publicly. That's not a secret. It is something that we're intently focused on."

Strong says she would like the superintendent and school system to continue collecting data on racial, Confederate flag and election incidents.

"I think if you have this level of aggression going on, I think you should continue to collect this report until it's eliminated," she said.

Strong would also like more focus on eliminating hate crimes and other racially motivated problems in the schools. The topic is especially close to her heart because several of the incidents listed in the report involved her daughters, she said, including one report her daughter made about students using racial slurs on a school bus.

"I don't know what has to happen," Strong said. "Like, do we have to have a lynching on the school campus for people to start realizing that these things are really, actually occurring and we have to be a little bit more protective and vigilant about our students?"