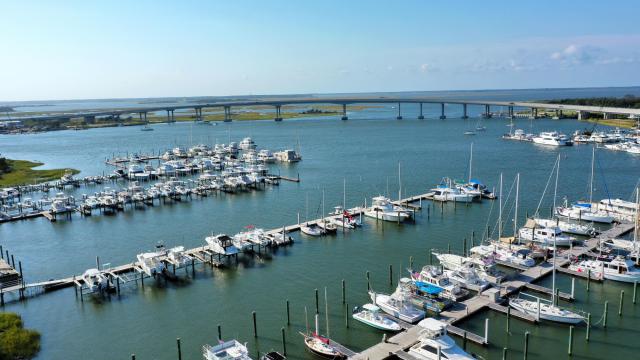 What's better than the beach? A faster way to get there.

U.S. 70, a four-lane route between Raleigh and Morehead City in Carteret County, is undergoing upgrades to become Interstate 42. The new route will shave almost an hour from the time it takes to get from the Triangle to the Crystal Coast — reducing travel from three to nearly two hours.

"There are many segments to this project — it's not all being done as one upgrade at the same time. It's being done in multiple pieces over approximately a decade," explained Don Kirkman, Carteret County Economic Development Director. "When the project is completed, the interstate will connect 1-40 near Garner to the Carteret County line."

I-42 will cover 132 miles basically along the same route as the current U.S. 70 corridor. Beyond being just a faster way to travel between the Triangle and the Crystal Coast, I-42 will be an important highway for freight movements, and it will expedite evacuations when storm events threaten.

"I would stress that I-42 is not just about moving people, this is also about moving goods. The Port of Morehead City has seen continual growth over the last several years. They've had significant increases in the volume of products they're moving in and out of the port," said Patrick Flanagan, former senior transportation planner for the Eastern Carolina Council of Governments. "Part of the rationale for the new Interstate 42 is its freight and commerce benefits — being able to have interstate access to the Port of Morehead City and making sure that the port continues to grow."

Several new I-42 segments, including the Goldsboro Bypass, are already complete.

Kirkman noted the Havelock Bypass (a four-lane, high-speed interstate alternative to U.S. 70 through Havelock) and the James City upgrades (a stretch of U.S. 70 from the Neuse and Trent River Bridges in New Bern to the new Havelock Bypass), will be complete within the next four years. When these two segments are completed, there will be no stoplights between Dover (just east of Kinston) and the Carteret County line.

One of the last pieces of I-42 will be the Kinston Bypass, a portion of which isn't scheduled to begin construction until 2027.

The ease of travel, in addition to the time savings, will make Carteret County attractive to tourists who want to spend a week, a weekend or even a day at the Crystal Coast. Workers employed by Research Triangle companies who have the flexibility to work remotely will find it much easier to live at the beach and commute to the Triangle when necessary. Kirkman also cited the large number of Triangle residents who own second homes in Carteret County, a number that is sure to increase as the Triangle experiences explosive population growth.

"Many residents in the Research Triangle region already own second homes, condominiums and investment properties on the Crystal Coast. Future residents who move to Raleigh, Durham, Chapel Hill, and the surrounding cities and suburbs are going to want beach homes," he opined. "The new Interstate highway from the Triangle to Carteret County will help the Crystal Coast become an even more popular vacation and second home destination for residents from the Triangle and other North Carolina metro areas."

In addition to quicker and less stressful routes for tourists, second home owners and remote workers, I-42 will also help facilitate more economic development all along the new I-42 corridor, including Carteret County. Inland access is especially important for coastal cities that rely heavily on commerce and logistics, including port communities like Morehead City.

"These transportation improvements make it easier to access the Crystal Coast and will have a major impact on our coastal economy. Southeastern North Carolina experienced substantial economic growth following the completion of I-40 to Wilmington in 1990," Kirkman explained. "The population growth trajectory in the Wilmington region — in Brunswick County, New Hanover County and Pender County — changed dramatically following the opening of I-40. And we are already starting to see positive impacts here with the Goldsboro Bypass and other completed highway improvements. We will experience significant economic benefits from each major segment of the I-42 improvements."

Additionally, Carteret County is a value destination for developers looking for long-term appreciation and growth potential, especially those in the Research Triangle region who have been priced out of the Triangle market. Kirkman said the Crystal Coast represents a great opportunity for Triangle investors looking for residential and commercial development opportunities.

"As an economic development professional, I'm excited about the new investment that will be attracted to Carteret County as a result of the new interstate, and our local governments are as well," Kirkman said.

County and municipal leaders are already planning for both the opportunities and challenges that will come with I-42 and the accompanying population growth. Kirkman believes Carteret County local governments, by anticipating and managing the growth, will be able to realize the benefits of the new interstate while preserving the Crystal Coast's beautiful and unique natural resources.

"The I-42 corridor has been the vision of many Eastern North Carolina counties for a long, long time; county leaders have done a lot of work and they've been really diligent," Flanagan added. "It's not often that you see this many counties getting together on a regular basis and agreeing on a common vision, working toward that vision and realizing that vision. This interstate will help the counties along this corridor and those directly adjacent to those counties retain population that might have otherwise moved to a metro area. In addition, with the economic development that will accompany the new interstate, many counties in Eastern North Carolina will be able to retain existing businesses and attract new investment and jobs."