Play a life-size version of Candy Land in downtown Clayton 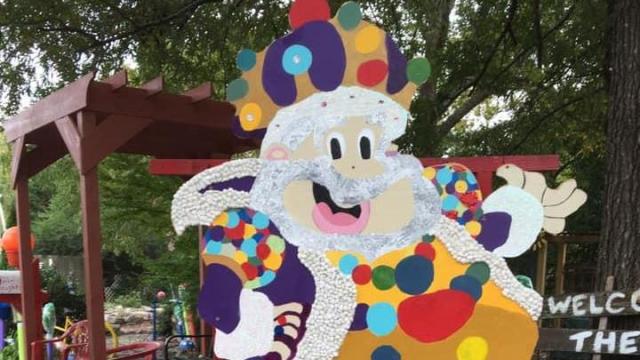 Clayton, N.C. — A life-size version of Candy Land has taken over the Main Street Garden in Clayton. Candy Land in the Garden opened on Oct. 31 and will remain through Jan. 4. The free attraction lets kids and adults turn into Candy Land figures as they walk through Peppermint Stick Forest, Gumdrop Mountain and the Ice Cream Slopes, among other sweet destinations, to play the game.

The hand-crafted attraction is the work of the Woman's Club of Clayton, which has been putting up elaborate family-friendly attractions at the community garden for the past couple of years.

Rachel Masimore, chair of the Clayton chapter's environment committee, said the brainchild behind the life-size Candy Land is her daughter Melissa Francis. Francis also was behind a gingerbread village two years ago and Snoopy's playground last year, which included a 16-foot plane.

"My daughter has a very vivid imagination," Masimore said.

This year's creation includes 10-foot candy canes for a Candy Cane Lane, along with Gingerbread Plum Trees, Licorice Lagoon and some Christmas-themed displays.

Women's Club members spray painted the gravel walkway different colors. People play the game by rolling dice and moving to the correct spot. Once they play the game, players can turn in the dice for some candy. 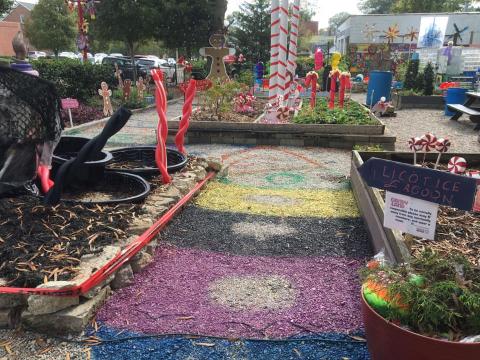 "A lot of kids don't know about the board game," she said. "We try to have someone there to show them how to play."

Candy Land in the Garden has drawn about 500 people from across the region — and even Washington, D.C. Masimore expects they might have been in town to visit family.

As the COVID-19 pandemic continues, visitors are expected to wear a face mask and maintain a physical distance from others. Family groups are expected to stay together as they play. "We do try to keep it safe," Masimore said.

Masimore said it's been fun to see families play the game together—especially so many months into the pandemic.

"That's really why we tried to make it special," she said. "Kids have had nothing to do."