Sharkey's Cuts for Kids is coming to north Raleigh this fall. 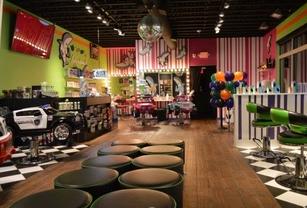 The national chain of kid-friendly salons will open at Six Forks Station Shopping Center, which is at the corner of Six Forks and Strickland roads. The center also is home to PetSmart, The Home Depot and Bed Bath & Beyond.

At Sharkey's, young kids can get their hair cut while sitting in a Disney Frozen Jeep, a fire truck, a red Corvette or a Mickey Roadster Racer while watching a favorite show or movie on Disney+. For tweens, there's a Tween Lounge, complete with gaming stations and a private area for spa treatments.

According to Sharkey's website, other locations also are slated to open in Morrisville and Raleigh.

Other kid-friendly salons in the region include JJ's Kids Cuts in Raleigh and Cookie Cutters Haircuts for Kids locations in Raleigh, Cary and Durham.