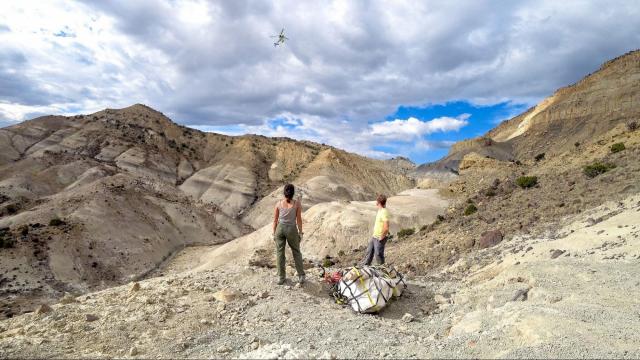 Raleigh, N.C. — A researcher at North Carolina State University has recovered a clutch of rare dinosaur eggs from cliffs in Utah.

The football-sized oviraptorosaur eggs were in sediment estimated to be 97 million years old, said Lindsay Zanno, who also is head of paleontology at the North Carolina Museum of Natural Sciences. The site also contained evidence of ancient trees that once lined a river bank.

"This is the first time we found a clutch of oviraptorosaur eggs on the North American continent," Zanno said in a statement. "It's incredibly exciting for us."

Oviraptorosaurs had a half-moon shaped crest on the head, a toothless beak, long feathers on the arms and a broad tail-feather fan similar to a turkey. Hundreds of nests, each containing dozens of eggs, have been found in China and Mongolia, yet only two fragmentary eggs had been recovered in North America before the find by Zanno's team last October.

"It was a moment when 20 years of hard-earned determination, patience, luck and that little voice inside my head led to one of the most important fossil discoveries of my life," said Terry Gates, a lecturer for N.C. State’s Department of Biological Sciences, who was part of the team of paleontologists.

The eggs were tucked in the side of a 2,000-foot, sheer cliff-face in the San Rafael Swell in central Utah. The researchers encased the eggs in plaster, and a helicopter had to lift the resulting 1,400-pound weight off the cliff and place it in a trailer to be transported back to North Carolina.

Visitors to the Museum of Natural Sciences can now watch researchers separate the eggs from the surrounding rock for further study.