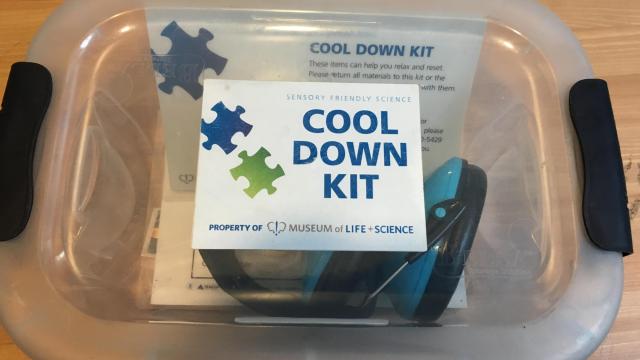 Durham, N.C. — Over the past couple of years, staff at the Museum of Life and Science have been working to boost their offerings for kids on the autism spectrum or with other special needs. And, this year, they're working to get the word out to an even broader audience about their efforts and upcoming events.

In 2019, the Durham museum will roll out a series of sensory-friendly events. Here's what's on the schedule:

These aren't new programs. But Michele Kloda, the museum's director of learning environments, tells me that past Sensory Friendly Fridays, in particular, were held as a pilot of sorts to determine the response and whether people would come. And they did. Kloda tells me an average of 150 to 200 people attended last year's programs.

"Some families come from upwards of an hour and a half away," she said. "We're stunned by it. These events are few and far between in our region, and they've said this is something we're going to take a chance on because of the price and because we're starting to build a reputation. We're over the moon."

High rate of diagnosis in N.C.

About 1 in 68 children are diagnosed with autism spectrum disorder in North Carolina, according to a 2017 report from the Centers for Disease Control and Prevention. That was a 30 percent increase since 2012. Many families are drawn to the region after their child's diagnosis because of the services here through UNC-Chapel Hill's TEACCH autism program, a system of regional centers across the state that provides resources for those with autism, and others.

"We have a high incidence of autism in North Carolina, and it's not going away any time soon," Kloda said.

The developmental disorder can impact both communication and behavior and makes some sensitive to bright lights, loud noises and crowded spaces. For some, a day at a loud, crowded children's museum would be next to impossible to navigate.

The Museum of Life and Science isn't alone in its efforts to serve these families in the Triangle. Marbles Kids Museum offers evening play for families with kids with special needs every other month and lights up, sound down moving screenings in its IMAX theater twice a month. Kidzu Children's Museum has hosted sensory-friendly play. And Raleigh Little Theatre, Theatre in the Park, North Carolina Theatre and Durham Performing Arts Center all have worked to provide resources and special performances for families with members on the spectrum.

Kloda said the museum's work began back in 2016 when leaders started looking for ways to better support guests on the autism spectrum. They eventually connected with UNC's TEACCH program.

"This is the collaboration we needed to get it off the ground," she said.

Through the partnership, the program provided intensive staff training for those who work with museum guests or coordinate other programs. Regular training continues at the museum.

In April 2017, the museum launched its first Autism Awareness Day; a second was held last year. It also now offers cool down kits with relaxation strategies and sensory toys, social narratives and more. Details are on the museum's website. And in 2018, the museum quietly offered a couple of Sensory Friendly Fridays.

"We're growing our base within the community of people who are interested in this," Kloda said. "We feel like we really understand the communities we're serving and are ready to" open it up to a bigger audience.

"Our staff is actually asking for more, which is so wonderful," Kloda said. "The enthusiasm for this is just tremendous. We're thrilled to be able to offer it. And we're at the point where other museums are contacting us and asking us for guidance on how we developed our program."