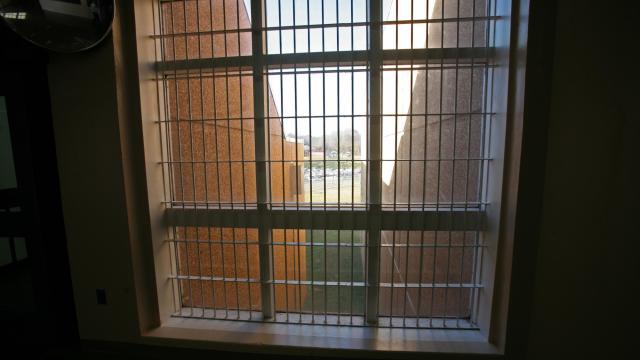 Raleigh, N.C. — Two years after a mentally ill inmate died of thirst in the custody of the North Carolina prison system, civil rights advocates say the state hasn't done enough to reform practices that landed him in a solitary confinement cell, handcuffed and alone for days before his death.

Michael Kerr, 53, died in the back of a prison van on March 12, 2014, at some point on the three-hour trip between Alexander Correctional Facility and Central Prison in Raleigh. An autopsy months later revealed the Army veteran, who suffered from untreated schizoaffective disorder, died of dehydration. Kerr had spent the month prior to his death in solitary confinement – called restrictive housing in North Carolina – where mental health professionals refused to acknowledge his slow decline.

His death came amid a renewed national push to change how state and federal governments use solitary confinement, which human rights advocates say damages mental health, makes prisons more violent and impedes the rehabilitation process for inmates who will one day rejoin society. Their argument has gained traction with the Obama administration as well as the Republican North Carolina legislature, which last year diverted millions toward the creation of therapeutic units in several facilities that would treat mentally ill inmates rather than shut them in restrictive housing.

Reform has backing from prison brass

Prison leaders have pushed publicly for such reform with the backing of Gov. Pat McCrory, whose recommended 2015-2017 budget for the establishment of more mental health treatment units was ultimately slashed in half by state lawmakers.

Dr. Gary Junker, who came on board as the prison system's director of behavioral health in the fall, said these "therapeutic diversionary units" are designed to move mentally ill inmates out of solitary confinement for therapy, recreation and other programming to transition them back into the general prison population.

The first new therapeutic diversionary units, due to open at Maury Correctional Institution in Greene County and Central Prison at the end of April, will focus first on the almost 70 mentally ill inmates currently in solitary confinement who are due for release within the year.

With $12 million over the next two years, the department will create eight treatment units at maximum-security prisons across the state and expand an existing mental health facility at Central Prison. Junker said the move will open up about 130 beds by the end of 2016 and another 100-plus beds in 2017.

"Quite frankly, within two to three years, we're going to see a dramatic reduction of mentally ill inmates in restrictive housing," Junker said. "We hope to work ourselves out of business and turn TDUs into a therapeutic environment."

But even when all the treatment centers are fully open, they won't have the capacity to treat the 350 inmates receiving treatment for mental health issues currently in solitary confinement across the state.

That worries advocates like Chris Brook, legal director of the American Civil Liberties Union of North Carolina, who says the legislative funding won't be enough to seriously reform the practice.

Nearly half of the beds in the new treatment units aren't scheduled to open until much later this year, he said, meaning the department will struggle to transition inmates facing the prospect of going straight from restrictive housing back to the street.

"If you barely have enough beds for people who absolutely must have treatment today, that's an indication you don't have enough resources," Brook said. "TDUs, in theory, do offer some promise. But they can't fulfill that promise in practice if there's not going to be money to open sufficient beds."

Brook also referenced the work of an independent consultant Department of Public Safety officials hired in 2012 and 2014 to assess the state of mental health treatment and solitary confinement practices at prisons in the state's system. Dr. Jeffrey Metzner's 2014 review found that about 700 inmates receiving mental health treatment were confined to restrictive housing.

But that number, Metzner pointed out, was lower than it should be because of inadequate mental health screening as inmates enter the prisons.

"It's not a situation where they're in the vicinity of addressing the scope of this problem," Brook said.

His organization is calling on the legislature to step up funding in the short session to tackle the issue and move closer to effectively ending solitary confinement for the mentally ill.

Guice said there's no doubt the Division of Adult Correction and Juvenile Justice, which he's headed up since McCrory took office in 2013, will need more funding both for the mentally ill population and for other areas like community corrections, which monitors inmates after they're released.

But he says the division has been active in the aftermath of Kerr's death with initiatives to halve vacancy rates among prison staff, boost training and add therapeutic and incentive-based programs that provide alternatives to solitary confinement.

Although he said he'll continue to push for more funding from state lawmakers, Guice said the department is heading in the right direction.

North Carolina is not alone in its efforts toward reform.

President Barack Obama called last year for the end to solitary confinement in federal juvenile facilities, and new Justice Department policies will also curb the use of the practice in federally run prisons.

She pointed to states such as Colorado, Washington, Maine, Texas and Mississippi that have all led the way in reforms of prison operations.

"It's interesting, because this is one of the few issues that crosses party lines," Fettig said.

Rather than putting staff and inmate safety at risk, a growing body of evidence shows re-evaluating solitary confinement practices leads to a safer environment.

"Every day we continue to rely on (solitary confinement), we make the job harder for correctional officers, nurses and psychologists at DPS," Brook said.

The practice is especially hard on inmates who enter restrictive housing at the end of their time in prison. Fettig said it's important to remember that the vast majority of inmates will eventually be released.

"What psychologists say is that you're basically crippling them as a person. Then you're dumping them on the street," Fettig said. "It's a toxic combination."

A former community corrections officer himself, Guice said he knows about that toxic combination full well.

"That person is eventually going to come back to our community," Guice said. "If they can't move through the system in prison, when they get back to the community, they're still going to have those issues."

Removed from tragedy, advocates worry pace of change will slow

In a lot of ways, the impact of Kerr's death has been far-reaching for North Carolina.

The state paid his estate a $2.5 million settlement after determining that the prison system's responsibility for his death was "inescapable."

Several prison staffers were fired in the wake of Kerr's death, although some have successfully fought to get their jobs back. No criminal charges have been filed, although a federal investigation is ongoing.

In almost every statement on the need for changes in prison or the broader issue of mental health – a concern that prompted McCrory to dedicate a task force to recommending reform – public officials have referenced the cascading failures that led a team of prison staffers to leave a man shackled nearly motionless for five days in a cell barely wide enough to stretch out his arms.

Opponents of solitary confinement acknowledge the practice isn't likely to go away completely. Instead, they're pushing for a drastic reduction in its use.

Guice says that will take a culture change, as well as an understanding by prison staff that restrictive housing can no longer be used arbitrarily. That's why he said he's invited advocates such as the ACLU, state mental health associations and disability rights advocates to help prison leaders develop practices that prevent inmates from going into solitary and get them out more quickly.

What worries advocates like Brook, two years later, is that this first step will be the only step, especially as the memory of Kerr's death fades.

"What it required for the legislature to provide these inadequate resources was a staggering tragedy, a staggering failure," Brook said. "The concern is you get further away from this tragedy, that attention and energy will dissipate."

Nationally, Fettig said the issue is now at a tipping point. And in North Carolina, she said Kerr's death should be a constant reminder of what's at stake.

"It's a cautionary tale that we need to change," Fettig said. "There should never be another Michael Kerr in North Carolina."