Local, state parks line up events for Take a Child Outside Week 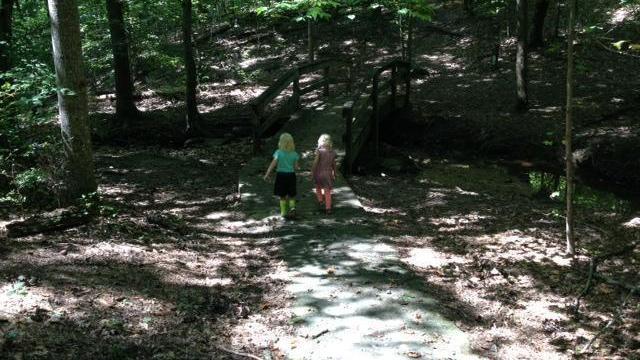 Take a Child Outside Week, an annual event that encourages adults to get out in nature with their kids, starts Wednesday.

Liz Baird, now director of school programs at the N.C. Museum of Natural Sciences, started the week back in 2006. The book "Last Child in the Woods: Saving Our Children from Nature Deficit Disorder," by Richard Louv, inspired the effort. And Louv has thrown his support to the week, which is observed across the country and in spots around the world.

Parks, nature centers and other venues typically host special programs during the week, which always runs from Sept. 24 to Sept. 30.

We're lucky here in the Triangle to have miles of greenway and some great nature parks to explore. Some of the local parks departments also have lined up activities to encourage kids and their adults to explore nature.

Here are some of the activities:

Wake County's great parks system always offers a host of programs during TACO week. There's everything from nature stories for preschoolers at Blue Jay Point County Park to a drop-in program at Harris Lake County Park on Thursday (when some Wake County kids have no school) to an evening scavenger hunt at Lake Crabtree County Park on Sept. 29. These are three of the 15 programs planned in the next week. Check Wake County's TACO page for more information. Some of the programs require registration. All of them are free.

Raleigh parks has lined up a dozen programs in honor of TACO week. They include the regular Wee Walkers for preschoolers at Durant Nature Park. There's an evening paddle on Lake Johnson on Wednesday. National Hunting and Fishing Day at Lake Wheeler Park is on Saturday. And there's more. Some of the programs require pre-registration and a small fee, but not all.

JC Raulston Arboretum in Raleigh offers daily activities during TACO week such as cloud watching, leaf rubbing and a storytime. Most are free or very inexpensive. This is a great place to explore with kids.

State parks also are offering special programs in the next week. They include an event Saturday to mark the opening of two TRACK Trails at Falls Lake State Park in Wake County. The trails, which we'll see more off around here, I'm told, are designed for kids ages 6 to 12 and their adults. The trails include activities for kids so they're getting more out of it than just a walk in the park. Other state TACO programs include fishing for kids at Jordan Lake and a spider program at Eno River State Park.

Prairie Ridge Ecostation, the outdoor lab for the N.C. Museum of Natural Sciences in west Raleigh, will host its annual Take a Child Outside Week event from 9 a.m. to noon, Saturday. The free program stretches across the property, which includes a garden, pond and prairie. There's also the very popular nature playground. The PNC Foundation, which receives its principal funding from The PNC Financial Services Group, recently committed to a renewed grant of $75,000 to sustain the Nature Play Space and its early childhood education programming for a second year, according to a press release. PNC employees volunteer regularly at the site, it said.

I'll share some of my favorite local nature parks for kids tomorrow.