Raleigh, N.C. — Wake County Sheriff Gerald Baker is concerned about the timing of a gun show being held at the North Carolina State Fairgrounds this weekend.

On Saturday, long lines of people were waiting outside the Jim Graham Building for the Raleigh Gun and Knife Show. 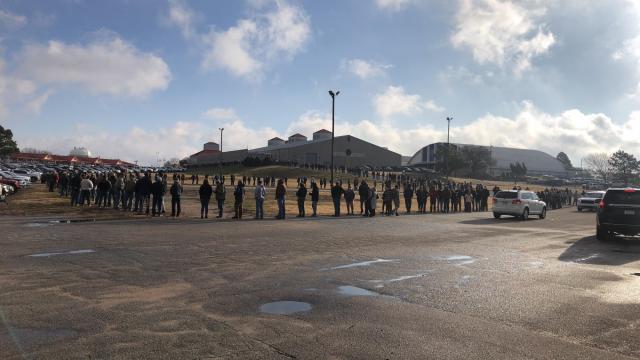 Baker is concerned that the event coincides with possible armed protests planned at state capitols across the nation this weekend and next week ahead of President-elect Joe Biden's inauguration.

Earlier this week, the FBI warned of plans for armed protests at all 50 states capitals and in Washington, D.C. It's unclear if such protests will occur in North Carolina in the coming days, but the Wake County Sheriff's Office and other local law enforcement are ready to step up their response if riots take place.

Baldwin called for the organizer of the gun show to increase its security.

"We asked if they would add security and take additional measures to ensure everyone’s safety, as we are worried about guns and people carrying downtown," she said.

The North Carolina Department of Agriculture released a statement on the show, saying, "This weekend's show is one of the company's regularly scheduled shows they have booked with us for the year. They have been renting facilities with us for many years, and law enforcement will be on the grounds in support of the show as is typical for these events."

Under state orders due to COVID-19, only a limited capacity of people are allowed inside the gun show at one time, which may account for the line of more than 100 people out the door on Saturday morning.

According to the event, masks are required.

The show, which has multiple events planned in Raleigh throughout the year, is hosted by the Dixie Gun & Knife Show Classic. Organizers of the gun show have not returned WRAL's request for comments.