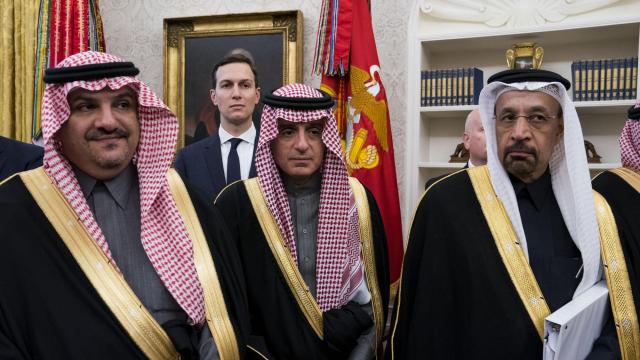 WASHINGTON — For President Donald Trump, who has made Saudi Arabia the fulcrum of his Middle East policy, the possible murder of a Saudi journalist in Turkey is a looming diplomatic crisis. For Trump’s son-in-law, Jared Kushner, it is a personal reckoning.

More than anyone in the Trump administration, Kushner has cultivated Saudi Arabia’s crown prince, Mohammed bin Salman — whose family may have played a role in the disappearance of the journalist, Jamal Khashoggi — elevating the prince into a key ally in the Arab world and the White House’s primary interlocutor to the kingdom.

Kushner championed Mohammed bin Salman, 33, when the prince was jockeying to be his father’s heir; had dinner with him in Washington and Riyadh, the Saudi capital; promoted a $110 billion weapons sale to his military; and once even hoped that the future king would put a Saudi stamp of approval on his Israeli-Palestinian peace plan.

While the fate of Khashoggi, a resident of Virginia and a columnist for The Washington Post, remains unclear, allegations that he was killed on the orders of the royal court has thrown Kushner’s grand bet on the crown prince into doubt.

He may be less the risk-taking reformer the Trump family eagerly embraced than a reckless, untested ruler, whom critics say has been emboldened by his ties to the Trumps to take heavy-handed actions at home and abroad.

Saudi leaders, including the crown prince, insist Khashoggi left the Saudi consulate in Istanbul on his own, and they do not know what happened to him after that.

But if it becomes clear that he ordered the assassination of Khashoggi or was connected to it in some way, it will provoke an outcry on Capitol Hill; embarrass U.S. executives, dozens of whom are flocking to Riyadh for a conference next week where the crown prince is scheduled to speak; and put Kushner, who was once himself a newspaper publisher, in an extremely awkward position.

After a week of laying low, there is evidence the White House is turning up the pressure on the Saudis. On Tuesday, the White House said, Kushner and John R. Bolton, the national security adviser, spoke to Mohammed bin Salman by phone about Khashoggi’s disappearance. Secretary of State Mike Pompeo also called him.

“In both calls, they asked for more details and for the Saudi government to be transparent in the investigation process,” said the White House press secretary, Sarah Huckabee Sanders.

Turkey is also raising the pressure. On Wednesday, Turkish officials and a newspaper close to the Turkish government identified 15 Saudis who they said were operatives who flew to Istanbul last week in pursuit of Khashoggi.

One of the men on the list published by the newspaper, Sabah, is an autopsy expert at Saudi Arabia’s internal security agency, according to the two Turkish officials. Another appears to be a lieutenant in the Royal Saudi Air Force. The officials, citing confidential intelligence, said all worked for the Saudi government.

Kushner declined to discuss the state of his relationship with Mohammed bin Salman. Behind the scenes, a person familiar with the matter said, he conveyed a letter from the publisher of The Post, Fred Ryan, to the crown prince, expressing concern for Khashoggi and asking for his help. Kushner has also taken other unspecified steps, this person said.

Trump administration officials said there were still too many unanswered questions to draw any conclusions about what happened in Istanbul. But Trump said Wednesday that he, too, had spoken to a senior Saudi, whom he did not identify, and promised, “We’ll get to the bottom of it.”

Even before the murky events in Istanbul, Kushner’s partnership with Mohammed bin Salman was running into headwinds. Saudi Arabia rebuffed Trump’s pleas to settle a bitter dispute with Qatar, its neighbor. Its arms purchases have fallen far short of the $110 billion trumpeted by Kushner, in part because of resistance in Congress and in part because that price tag was always somewhat exaggerated.

The prince’s father, King Salman, ruled out public support for Kushner’s peace plan after Trump’s decision to recognize Jerusalem as the capital of Israel — a move that alienated the Palestinians.

Most important, from the perspective of lawmakers, Saudi Arabia has continued to kill civilians in Yemen with errant airstrikes, in a much-criticized intervention masterminded by Mohammed bin Salman in that country’s civil war.

Reports of Khashoggi’s potentially grim fate have only fed the criticism from Republicans and Democrats on Capitol Hill, who have long been wary of Saudi religious extremism and ties to terrorism. Sen. Lindsey Graham, R-S.C., one of Trump’s closest allies in Congress, said that if the Saudis were responsible for Khashoggi’s death, there would be “hell to pay.”

“I’ve never been more disturbed than I am right now,” he said. “If this man was murdered in the Saudi consulate in Istanbul, that would cross every line of normality in the international community.”

Policymakers across Washington expressed concern that the Saudi government’s lack of transparency and refusal to provide any information about Khashoggi’s whereabouts reflected a darker consequence of the kingdom’s relationship with the Trump White House.

“It does seem like the Saudis are less concerned about U.S. views than ever before both because they assume Trump won’t care and because they think they don’t need U.S. approval,” said Gerald M. Feierstein, a former ambassador to Yemen who was the State Department’s second-ranking diplomat for Middle East policy from 2013 to 2016.

Saudi Arabia’s muscle will be on display next week, when U.S. technology and financial titans gather at the investor conference in Riyadh that the crown prince will attend. Treasury Secretary Steven Mnuchin will represent the Trump administration at the meeting, which participants have called “Davos in the Desert” and is held at the same Ritz-Carlton Hotel where Mohammed bin Salman jailed dozens of wealthy Saudis in what he said was an anti-corruption campaign.

Two other scheduled attendees have ties to Trump: Thomas J. Barrack Jr., a financier who is a friend of the president’s; and Dina H. Powell, a Goldman Sachs executive and former deputy national security adviser who worked closely with Kushner on Saudi Arabia and is a leading candidate to replace Nikki R. Haley as ambassador to the United Nations.

The Treasury Department said Mnuchin was still planning to attend. A person working with U.S. business executives said that if proof emerged that Saudi Arabia ordered Khashoggi’s killing, at least some would cancel.

The New York Times, one of several major news organizations that were media sponsors of the conference, has decided to withdraw from the event, Eileen Murphy, a spokeswoman for the paper, said Wednesday night.

Kushner’s relationship with Mohammed bin Salman dates to March 2017, when the two bonded over lunch at the White House. Kushner, 37, persuaded Trump to make Riyadh his first foreign trip as president. In return, he extracted commitments from the Saudis to take steps to curb terrorism, including a new center to monitor militants.

The blossoming relationship paid quick dividends for Mohammed bin Salman when Trump backed Saudi Arabia in its feud with Qatar, even over the reservations of his secretary of state at the time, Rex Tillerson.

Even in those days, a former administration official said, Trump’s aides regarded the ties between Kushner and Mohammed bin Salman as a mixed blessing. While it gave the White House a channel to Saudi Arabia’s designated heir, it ruled out the possibility of sending an older, more seasoned official to give advice to the young prince.

Tillerson, who had a bad relationship with Kushner, could not play that role, and even Pompeo, who made an early trip to Saudi Arabia as secretary of state, has deferred to Kushner on the crown prince.

Pompeo recently certified to Congress that Saudi Arabia and the United Arab Emirates were doing enough to minimize the deadly consequences of their aerial campaign in Yemen. This came despite an Aug. 9 airstrike on a school bus in Yemen that killed more than 40 children.

He also overruled the recommendations of State Department experts who concluded that the Saudi-led coalition had not yet demonstrated enough progress in mitigating civilian casualties, according to Andrew Miller, a former State Department official.

A growing number of Pentagon officials and senior U.S. military commanders are also voicing exasperation over a conflict that has spiraled into one of the world’s worst humanitarian disasters.

“There’s a level of frustration we need to acknowledge,” Lt. Gen. Jeffrey L. Harrigian, said in an interview in late August.

For all the turbulence, defenders of Saudi Arabia say, Mohammed bin Salman has proved himself a valuable ally for the United States.

“It’s been a rocky road, PR-wise, but they made the right call, strategically,” said Ali Shihabi, the founder of the Arabia Foundation, who has close ties to the Saudi royal court. “They have an ally who is on the same page as they are.”

Still, the growing criticism from all quarters complicates those shared goal.

“Although from a distance the U.S.-Saudi relationship appears rock solid, there are cracks in the foundation,” said Robert Malley, a former White House coordinator for the Middle East, North Africa and the Gulf during the Obama administration.

“If one adds what happened to Jamal Khashoggi, and if some of the horrifying stories turn out to be true, one can imagine this having profound implications for U.S.-Saudi relations,” Malley said.