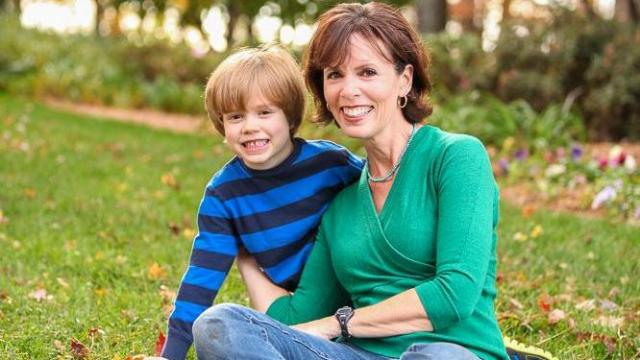 Of course, those words never left my mouth, but, boy, oh boy, that was what I was thinking!

My little boy was flailing around in the exam room. His eyes crazed and his head practically spinning. It was like a scene out of "The Exorcist."

Before we even got to the doctor's office, panic was plastered across Will's face. I kept looking in the rear view mirror, seeing that look of complete terror. He was worried he'd have to take the strep throat test. I tried to be Polly Positive and kept telling him that we didn't know what was going to happen. I told him we just wanted to make sure he felt better. He wasn't buying it. Neither was I.

Well, we all know what happened. The nurse said, "we need to do a swab," and walked out of the room. Will asked what a swab was. I wanted to lie, but, had to tell the truth. Oh, the tears.

Then, the doctor walked in. He was filling in for our regular doctor and ... oh my! He saw Will stretched out on the exam table not flinching.

The doctor started running around the room like his pants were on fire! He jokingly yelled "Nurse, nurse - we've got a situation! The patient isn't responding!"

Will opened one eye and then played opossum again. Then, the doctor grabbed Will under the armpits and tickled him like crazy and said "I've got a pulse! He's going to be OK!" Will couldn't help but laugh.

It took three of us to hold Will while they swabbed his throat. I won't lie, it was awful to see him so distraught. But then the nurse gave him a juice box and the doctor talked to him in a way only a six-year-old can appreciate.

Turns out the fun doctor is moving to Africa. Selfishly, I wish he'd stay... but, the children of Africa are getting the best medicine possible: A doctor who cares.

As for Will, the strep test was negative. Whew! As for me, I think I'll let Mike take him to the doctor the next time!

Julia is a reporter for WRAL-TV and the mother of a grade schooler. She writes monthly for Go Ask Mom.