Inside the walls of St. Agnes Hospital: History of segregated health care in Raleigh

Raleigh, N.C. — The stone walls of St. Agnes Hospital are more than a century old. Although the structure is hollowed-out and overgrown with curtains of ivy, the building's remains hold memories from an era of segregation in medical care.

St. Agnes Hospital is viewed by many as a symbol of strength and resilience in the aftermath of slavery. It was hand-built by the students of St. Augustine's College. In fact, students even quarried the stone from the earth themselves.

The hospital was established in 1896, within a single generation of enslaved people being freed from local plantations, to provide much-needed care to Raleigh's Black residents, as well as provide medical training for Black students. 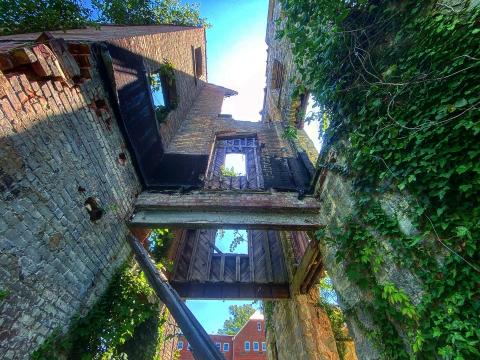 The stone structure that remains today was completed in 1909 and included 75 beds, a nursing college and a nurses' home. St. Agnes provided the highest-quality medical care for the Black community of any hospital between Washington, D.C., and New Orleans.

"It served over 75,000 African-Americans in three states during its existence," said a brief video documentary on the history of the school.

The hospital closed in the early 1960s, when WakeMed allowed hospital buildings to become integrated; however, the hallways within were still kept segregated.

Pandemic, racial tensions and new technologies: History from 1918 repeats in 2020

The parallels between 2020 and 1918 are astounding, according to Linda Dallas, an artist and assistant professor of visual art at Saint Augustine's University.

When asked what the students who built St. Agnes Hospital in 1909 would think when seeing modern times, she said, laughingly, "I think they'd say in some ways this is just the same as the world they lived in!"

“The St. Agnes Hospital building was built in 1909. In 1918, there was the global flu pandemic. Thank goodness St. Agnes was in place the last time we had a pandemic. Can you imagine going through this and while having absolutely no access to a hospital?” said Dallas.

The summer of 1919 was known as the Red Summer, in which the highest number of lynchings in this country were ever recorded. 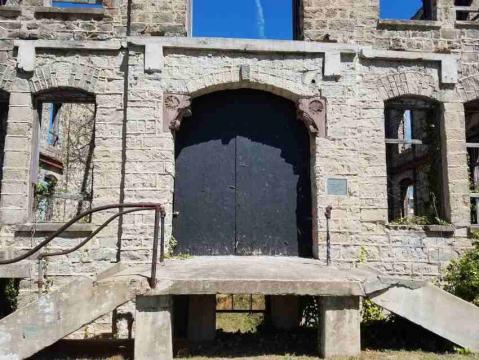 In that same period, the country was also trying to adjust to social changes brought on by the Industrial Revolution. Dallas said that on the first day electricity came to St. Augustine's and St. Agnes' campus, students came out and cheered for the electricians who wired the building.

"They didn't turn on the lights right away. They waited until it got dark, and they turned on the lights and cheered," said Dallas.

Dallas compares the changes of the Industrial Revolution, with the social changes modern people are experiencing with the Technological or Informational Revolution.

As bad as the 1918 influenza pandemic was, the Black community would have had even greater losses if St. Agnes had not been here in Raleigh.

A peek inside the century-old walls of St. Agnes

St. Agnes almost looks like a castle standing in downtown Raleigh. Many locals have reported driving past the building and wondering about its origins.

Since St. Agnes has been closed around 60 years, decades of growth have begun overtaking the walls. Trees and plants are growing up through the basement floor; ivy is carpeting the stone walls. 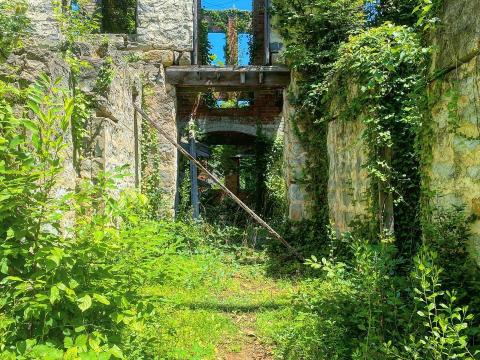 Only the basement is accessible, as the floors, doors and windows are long gone. Some locals mistakenly believe the structure was destroyed by fire, but actually the building's innards were actually pulled out intentionally, leaving only the shell behind. 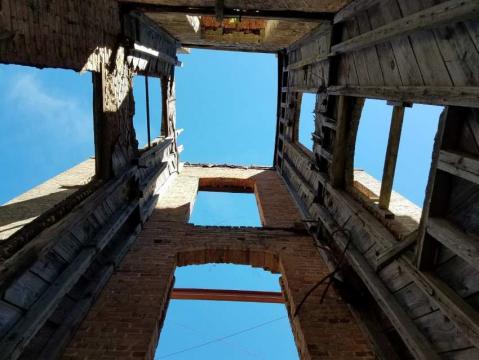 It's a visually stunning place, one-of-a-kind in Raleigh. Some of the building's skeleton reveals where doors and rooms once stood. A secondary section of brick is connected by what looks like a wooden walkway. Tree branches and leaves can be seen waving out upper windows. 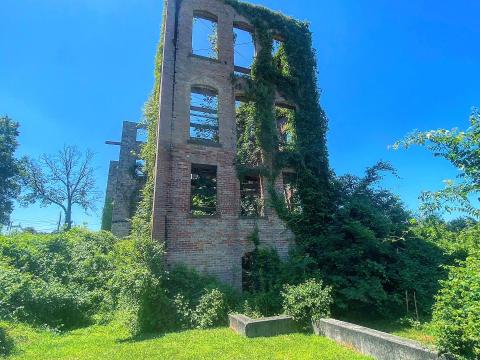 Three smaller windows towards the front of the building have a unique shape. According to Michael Palko, who wrote on the history of St. Agnes Hospital, those three windows indicate where the hospital's chapel once sat. 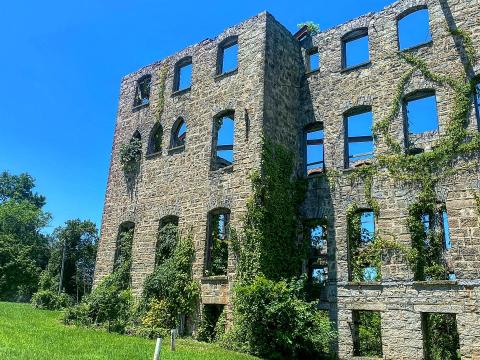 With no floors or modern indications of the hospital's layout, it can be difficult to envision how the hospital appeared during its heyday. Where were babies born? Where did surgeries happen? Where did nurses eat lunch?

By delving into the history, old images and stories, perhaps we can provide a clearer image of how St. Agnes Hospital once functioned – and gain a better understanding of its role in Raleigh history.

Raleigh was central to the growth of African-American medical care

Many locals have no idea the first four-year medical school was established right here in Raleigh: Leonard Medical School at Shaw University. 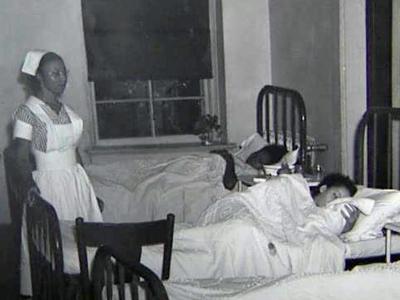 In 1882, roughly 14 years prior to the founding of St. Agnes Hospital, Shaw made history as the first institution in the entire country to offer a four-year program for med students. Over the next 36 years, the Medical School in Leonard Hall graduated almost 400 physicians, including Aaron Moore, the first Black doctor in Durham, according to the Raleigh Historic Development Commission.

Over 137 years old, this iconic building can still be seen on Shaw’s campus.

St. Agnes Hospital and teaching program was founded within the context of Shaw making history with its medical program. Sarah Hunter, the wife of St. Augustine's University's principal, raised the funds to open a small medical facility on campus. As the demand for institutionalized health care grew, the facility grew, eventually leading to building the St. Agnes Hospital in 1909.

The quality of care at St. Agnes was renowned. Because St. Agnes did not have access to as much funding and high tech equipment as local white-only hospitals, doctors at St. Agnes had to rely on exceeding skill and training. Some stories say the local white hospitals would allow doctors from St. Agnes to "moonlight" and come help perform complex procedures. 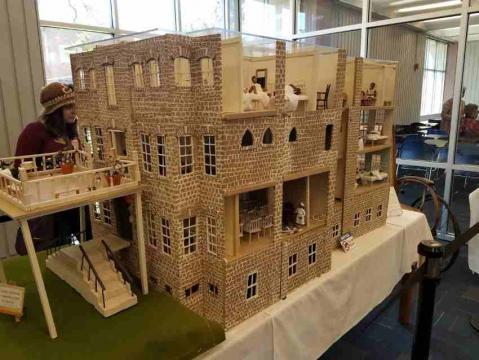 Trying to piece together the 'entire picture' of St. Agnes' history

As history in 2020 parallels circumstances from around a century ago right here in Raleigh, many locals have begun approaching history with a sense of pessimism. However, Dallas said, “There’s no place on the surface of the planet earth that doesn’t have a history that is a combination of wonderful things and horrible things.”

History, she said, is like people: Full of wonderful things and also full of horrible things. You can’t blind yourself to either of those things.

Dallas said, "Can you imagine the courage of Sarah Hunter, a white woman who pushed to establish a college for Black Americans in 1896? So it wasn’t all horrible, but it wasn’t all wonderful either. We have to be willing to see the entire picture."

She said, "Think of all the major art movements that came to be during the turn of the century in the early 1900s: Cubism, expressionism, all the isms!" 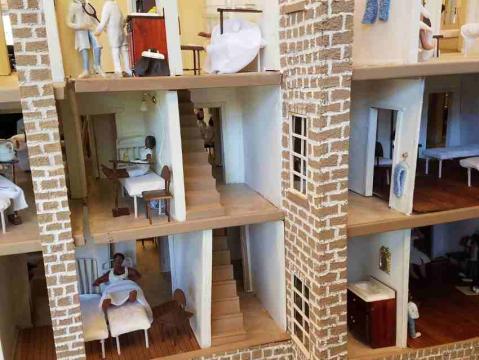 One artist even created a rendering of how St. Agnes Hospital may have looked during its years in service.

Poets, film makers, writers and visual artists from the early 1900s could be seen as mentors for living in this time period. Like us, they survived a pandemic, racial tensions and new technologies.

In that sense, the story of St. Agnes, etched in its stone walls, helps tell the story of how people managed during a time period that – although over a 100 years ago – can provide context for the struggles Raleigh is facing today.

Take a look at the website for Envision St. Agnes to keep a look out for fundraisers, events and art exhibits on the St. Agnes Hospital campus.

Take a look at the history of Oberlin Village, one of Wake County's freedmen's villages formed in the aftermath of the emancipation of slavery.

Or, hear the story of Joseph Holt, Jr., the first black student in Raleigh to challenge segregated schools. At just 13 years old, he faced death threats, hate mail and threats to abduct him, as his family fought for equal education.