Five questions with the self-proclaimed 'Father of Sour Beers' 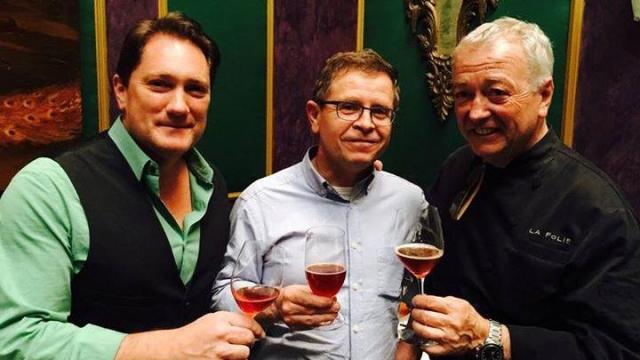 Rudi Ghequire of Rodenbach Brewery in Roeselare, Belgium, is on an East Coast tour promoting his brewery’s unique offering of sour beers. The brewmaster stopped by several Raleigh and Durham-area taprooms and bottle shops this weekend for official tastings.

Rodenbach, which owns more wooden barrel aging capacity than every brewery in the U.S. combined, is a world-renowned producer of sour beers. According to its distributors, the Triangle is one of the brewery’s largest markets and a major prospective area for the sour variety of microbrews.

The 20-year brewmaster of one of the world’s most prestigious breweries shared vintage Rodenbach sour Belgian red ale as local connoisseurs and media watched and learned about the beer and brewing process. A celebrity in the craft beer scene, Ghequire signed bottles for fans while answering questions as he discussed sour beer and its place in the growing Triangle market.

As Ghequiere explained, sour beers differ from other brews most notably due to the introduction of wild yeast into the brewing process, which itself often takes place in wooden barrels instead of metal vats like most brews. The wood accelerates growth, and this natural yeast bouquet, coupled with a longer fermentation period of months or years, produces a wide-ranging and often unpredictable flavor profile that Ghequire calls “the missing link between wine and beer.” Though naturally sour, craft sour beers are often sweet, brewed with macerated fruits and less hops than other varieties.

The process is complex and one that can take brewers years to master, and in his thick accent Brewmaster Ghequire was happy to answer WRAL’s questions about sour beer and his thoughts on the Triangle brewing scene:

1. Why do you think demand for sour beer in the Triangle is growing so fast?

The breweries here are exploding and the area’s palate is naturally expanding. The movement has been towards more bitter beers, with lots of hops, but with sour beers we’re bringing back a more balanced and sensitive taste. Bitter and sweet do not mix, and the key to great sour beer is less hops, less bitterness, and a more well-rounded flavor. What we’re talking about are more flavor possibilities with less hops.

2. Why have sour beers always been so popular in Belgium?

Well, we can grow all varieties of hops, and, really, all beer historically was sour. We’ve been producing sour beer at Rodenbach for 200 years and it is in our culture. Most beer producers aim to make the same beer every time, but that limits the flavors. Sour beers allows for new tastes and more refined pairings.

3. Food seems to be an important part of sour beer, why is that and what advantage does that give the variety?

Beer is food. Beer is healthy. Beer doesn’t need much alcohol, and that’s important to know. Sour beers don’t have too much alcohol, they’re sweeter, they’re less bitter and, how you might say, they’re not a “stomach breaker,” in other words. In the same way that a wine with too many tannins won’t pair well with sensitive flavors, bitter beers will not pair well with food either. Many sour beers pair well with more mild foods like fish for instance. It’s always better to drink a good sour beer than a cheap white wine.

4. How are sour beers related to other more well-known types?

Rodenbach’s standard is Flemish red or Belgian red ale. And red and brown beers are really just nephews of the porter. The Rodenbach method for sours was developed in part with porter brewers, who mixed mature beers with younger beers, and used standing wooden vats. There are similarities still today with brewers using nitrogen in their porters, to control the hops and keep a more well-balanced and less bitter beer. Really, all beer is related and borrows from others. There are influences from German and British brewing in Belgian sour beers.

5. What advice do you have for area brewers getting into sour beer making?

It’s very hard. Most brewers don’t want to work on wood. We call it the ‘zoo’ — it’s hard to control. But, it produces great flavors. We’ve been doing it at Rodenbach for two centuries. It’s always different, but it still must be consistent. That’s part of the fun. There’s a big opportunity in this market. With volume wines and low quality wines, there is a chance to beat them with good beer. Sour beer is the missing link between wine and beer. And with sours we’re winning over anyone and everyone who will try it. The breweries here can capitalize on that trend by making stable, well-rounded, and great tasting beers.