Raleigh, N.C. — When Gov. Pat McCrory signed House Bill 2, the measure designed to overturn Charlotte's nondiscrimination ordinance, he received a fair amount of criticism from both inside and outside the state. National media sources including the New York Times and Washington Post, as well as the state's largest newspapers have been critical.

In response, McCrory's press office distributed a news release titled Myths vs Facts: What New York Times, Huffington Post and other media outlets aren't saying about common-sense privacy law. The 18-point Q&A, which was subsequently distributed by many state agencies as well as McCrory's campaign, appears to be aimed at clearing up what the governor considers misperceptions about the law.

However, WRAL News has since received questions challenging the accuracy of the fact sheet. Rather than go through all 18 bullets, we're going to take on the points that have sparked the most questions.

Q: Does this bill take away existing protections for individuals in North Carolina?

McCrory's Answer: "No. In fact, for the first time in state history, this law establishes a statewide anti-discrimination policy in North Carolina which is tougher than the federal government's. This also means that the law in North Carolina is not different when you go city to city."

Fact Check: This claim is problematic on a multiple fronts. As we noted in a story last week, the law appears to wipe away protections for people against being fired based on "race, religion, color, national origin, age, sex or disability." In particular, the bill says North Carolina law "does not create, and shall not be construed to create or support, a statutory or common law private right of action, and no person may bring any civil action based upon the public policy expressed herein."

"Federal courts are, on balance, difficult venues to win employment and wage discrimination cases," said Tom Spiggle, an employment lawyer based in Arlington, Va. "While the discussion around the law has centered on bathrooms, it could end up limiting the options of North Carolinians who face other kinds of discrimination as well."

Also, in addition to Charlotte, there were at least two other cities in North Carolina that had nondiscrimination ordinances that could be affected by HB2. One, in Greensboro, deals with a broad nondiscrimination policy that covers, among other things, housing. Another, in Raleigh, prohibits discrimination by city contractors on the basis of "age, handicap, sex, race, color, creed, sexual orientation or national origin."

House Bill 2 says that the policy of the state is to prohibit discrimination based on "race, religion, color, national origin, age, biological sex or handicap." It conspicuously leaves out sexual orientation. And the bill prohibits cities from enacting ordinances that provide broader protections than those laid out by the state.

"The City Attorney’s office is currently reviewing how HB2 impacts city ordinances," said a spokesman for the City of Raleigh. Mayor Nancy McFarlane later said, "We still have many questions as to the effect of HB2 on our city processes. Our legal staff is conducting a careful review, and we hope to have more insight as to the bill’s impacts in the coming days. And while HB2 may affect some of our legal language, it does not change our hearts."

Asked Monday during an impromptu news conference about the apparent discrepancy between his office's fact sheet and the problems faced by Greensboro and Raleigh, if not others, McCrory said, "I don't know who's talking to you. We'll get back to you on that. You're blindsiding me with a question." He asked us to put to the question to his office.

"Greensboro’s housing ordinance is not preempted by HB2. It is authorized by a different statute," said Graham Wilson, McCrory's press secretary. Another spokesman followed up to point out that while HB2 affects "public accommodations," it does not name "housing" as an area of law that is affected.

However, lawyers for the Americans Civil Liberties Union and other lawyers with groups opposed to HB2 said Greensboro's ordinance was, in fact, affected.

Q: Will this bill affect North Carolina’s ability to create or recruit jobs?

McCrory's Answer: "This bill does not affect companies in North Carolina. North Carolina was one of the top states to do business in the country before this law was passed, and preventing Charlotte’s bathroom ordinance from going into effect on April 1 won’t change that."

Fact Check: In the days since the bill has been signed, multiple large corporations including American Airlines, which has a major hub in Charlotte, and Duke University, Durham's largest employer, came out in opposition to the law. Wells Fargo, Replacements Ltd., Apple, Microsoft all signed on to a statement opposing the law.

And on Monday, the High Point Furniture Market Authority, which organizes the massive semi-annual furniture trade show, warned that it was seeing blowback from the bill.

"Dozens of customers have contacted the High Point Market Authority to inform us that they have canceled plans to attend the Market in April due to passage of HB2. There are also several campaigns on social media calling for a boycott of the High Point Market this spring," the authority said in a statement.

The NBA, which is scheduled to hold its all-star game in Charlotte next year, warned last week that it could revisit that decision, saying the "law runs counter to our guiding principles of equality and mutual respect."

WRAL News has requested copies of correspondence to McCrory from business leaders who support the law. His press office has not yet responded. Asked Monday about the law's impact on businesses, McCrory said he had no business threaten to leave the state.

"I've had many corporations recertify their commitment to nondiscrimination, and we've clearly stated to them that their policies do not change," he said, adding, "Every company is allowed to have their own nondiscrimination ordinance in North Carolina."

Q: Does this bill mean transgender people will always have to use the restroom of the sex of their birth, even if they have undergone a sex change?

Fact Check: There are a couple of layers to this question that a cut-and-dry answer ignores.

First, the total population of transgender people in the United States is an open question according to advocacy groups and other reports, although the closest thing that there is to a consensus number seems to be about 700,000.

Of the total number of transgender people, there are significant proportion that have not undergone sex reassignment surgery, often due the expense as well as medical risks.

So transgender people who look and act like their preferred gender may not have had the surgery that would have allowed for their birth certificates to be changed.

And finally, there are states, such as Tennessee that will not change the sex on someone's birth certificate, whether or not they are transgender.

"We are seeing a lot of uncertainty for people with disabilities in our workforce and our rights to redress dismissal based on their disability," said Julia Adams, director of government relations for the Arc of North Carolina. She said that North Carolina has two different statutes protecting those with disabilities, and it's unclear if and how those two statutes function in concert now that House Bill 2 is law.

"We're trying to assess and get some clarity, but right now there is none," she said.

Corye Dunn, a policy analyst with Disability Rights North Carolina, said her group was still analyzing the impact of the bill but had concerns ranging from housing rights to employment discrimination.

​In a different area, McCrory's email posses the question of whether federal Title IX funding would be threatened. "No, according to a federal court which has looked at a similar issue," the release said.

That case, which originated in Virginia, is on appeal to the Fourth Circuit Court of Appeals, the same circuit with jurisdiction over North Carolina. It's unclear how that court might rule. In the mean time, education officials say that while no funding flows to the state as a result of Title IX, billions in federal funding could be affected by failure to comply.

"We are complying with Title IX to stay eligible for other Title funds," said Vanessa Jeter, a spokeswoman for the Department of Public Instruction.

Heather Lawing, a spokeswoman for Wake County Public Schools, said, "Our attorneys are still reviewing HB2 and its affect on our school system and Title IX compliance." 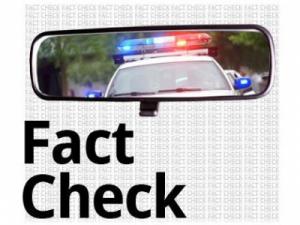 OUR RULING: Any one of the claims that we fact checked in depth might have, on their own, earned a red light on our fact checking scale. But taken together, the statements attempt to confer a degree of certainty about the law that doesn't appear to exist without acknowledging there are potential problems. This is why we assigned the news release as a whole a "moving violation," which is the lowest rating on our fact checking scale.