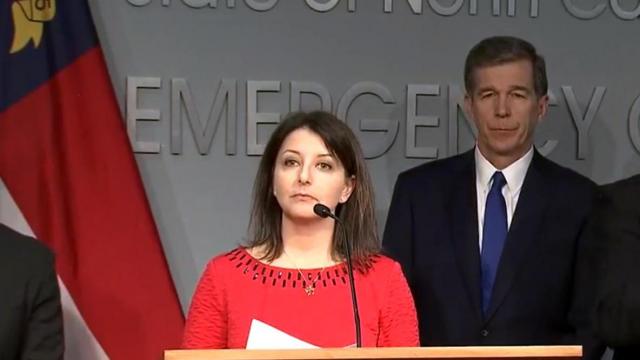 If it were not for Gov. Roy Cooper’s veto of the General Assembly leadership’s budget, the state agency most responsible for dealing with the coronavirus outbreak in North Carolina might be waging a short-handed struggle now amid a shrunken budget and dramatic staff cuts.

Instead, the veto blocked more than $42 million in crippling cuts. Overshadowed earlier this week by Cooper’s declaration of a state of emergency because of the spread of COVID-19, was state Health and Human Services Secretary Mandy Cohen’s stern admonition to legislators about the potential jeopardy their ill-conceived budget might have caused.

What’s clear is that legislative leaders, who’ve ignored the pleading of hospitals, doctors and insurance companies, don’t want to hear the truth from Cohen either. Do they even care?

“We had a conference budget that the General Assembly put forward, to remind folks that it cut $42 million worth of people at our department over two years. … I can’t hire people with non-recurring funds,” Cohen told the Legislative Oversight Committee on Health and Human Services.

“As I think about the crisis that we are preparing for, I don’t see how that would have been tenable in any way, even if without COVID-19. There was no scenario on which we could have delivered on the expectations you have of our department,” she said.

Ralph Hise, the Senate’s deputy president proTem, sharply challenged Cohen. “It was fortunate that we passed a ‘mini-budget which eliminated those cuts,” he said and then blamed the situation on Cooper’s veto of that bill, too. “It would meet the criteria now of being called a ‘right’ budget.”

The budget, and the “mini” budget bill the legislature seeks to force on her doesn’t even deal with financing mandates it had imposed on her agency. “To provide ongoing accountability and oversight of managed care and protect the health and safety of North Carolinians, N.C. DHHS needs the right budget,” Cohen told legislators in the big bold letters of a projected Power Point presentation. “When it comes to health and wellbeing, the state is better off (with) the (old) continuing than with the (legislature’s) Conference budget.” 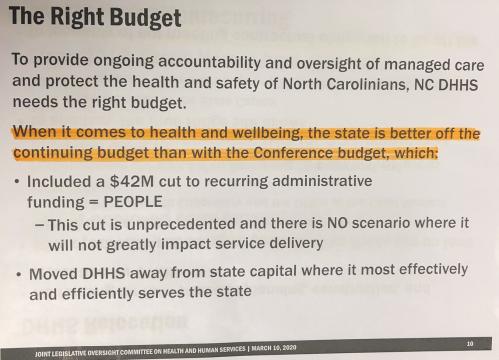 She’s right, of course. Legislative leaders stubbornly refused to negotiate with Cooper on ways to expand Medicaid to more than a half-million North Carolina citizens who cannot afford health coverage. They draft the budget in secrecy, injecting cuts, initiative and requirements without any open discussion or concern for their impact.

It is only the governor’s insistence that a budget serve North Carolinians not an ideological agenda that prevented the decimation of the agency that is now working overtime to protect the state from a potential health crisis.

It is sheer politics and blind ideology, not popular will, that has kept North Carolina from doing the smart thing and expanding Medicaid. It is the intoxication of power over practicality that imposes crippling cuts without concern for the consequences.