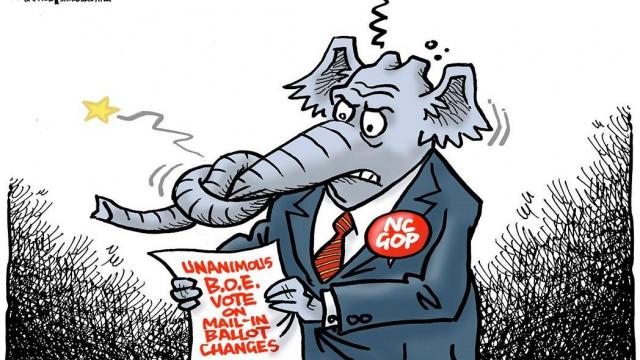 It turns out that the only thing “collusive” in the ginned-up controversy over the State Board of Elections’ efforts to settle some mail-in ballot lawsuits was the false outrage from Republican Party and GOP leaders in the General Assembly. It was a desperate ploy gone awry. It revealed the shameful and phony efforts – from the president on down – to create baseless distrust in our election and the security of our ballots.

How do we know this? Because the spouse of one of the Republican State Board members revealed, via a Facebook post, that David Black’s quitting was NOT necessarily for the reasons stated in a resignation letter. Rather it came after a “very unhappy” telephone call with the lawyer for the state GOP. “These resignations were not voluntary. They were told to resign. Sad times when Republicans are firing intelligent and trustworthy Republicans,” Deb Black said in a Facebook post.

This revelation -- the admission by the state GOP that after discussions with Philip Thomas, state Republican Party chief counsel, Black and Ken Raymond “put out their resignation letters.” It lays bare the insincere outrage of state Sen. Phil Berger, state House Speaker Tim Moore, U.S. Sen. Thom Tillis and Lt. Gov. Dan Forest. Their claims and allegations ring hollow in light of both this latest revelation along with any objective examination of the materials and minutes of the closed door session (released on Friday) where the Elections Board was briefed in detail, about the challenges to the state’s mail-in voting procedures and options to address them.

Maintaining public confidence in our elections is challenging enough when falsehoods flow from the president of the United States – as they have since his initial questioning of mail-in voting earlier this month during a visit to Wilmington. It is unfortunate that when Republicans and Democrats work together, discuss concerns, wrestle over compromises to reach workable solutions to settle lawsuits -- hyper-partisanship intervenes to subvert these efforts.

Republicans wrongly claimed the non-partisan Board of Elections staff, the Democrats on the board and staffers from state Attorney General Josh Stein’s office had conspired and failed to provide complete information – and that was why the board was able unanimously (that’s Democrats and Republicans agreeing) on steps to take to settle the legal action.

There is NO excusing the actions of the Republicans – who now seek to insert close allies of Berger’s on the state Board – former state Sen. Trudy Wade and former state Environmental Quality Secretary Donald van Der Vaart.

One lesson hopefully learned from all of this – that all public agencies should heed – is to avoid the impulse to operate behind closed doors. A look at the minutes and other documents released show little if any information required any confidentiality. Further, it was the intervening days when the public was not fully informed, that allowed Republicans to go unchallenged in conducting their mis-information campaign.

There is no excuse for spreading suspicion and distrust in our elections by misinforming and misleading North Carolinians. The GOP members of the Elections Board are picked by the state Republican Party. If they acted contrary to the wishes of party leaders: Be honest; Say so; Force them to resign and replace them with those who will do their bidding.

Lt. Gov. Dan Forest needs to withdraw the letter he sent to U.S. Attorney General William Barr questioning the State Elections Board’s proposed changes in mail-in ballot handling. He can simply say he was not, at the time he wrote the letter, fully informed.

It is time for the state Republican Party’s leadership to to show it believes in fair elections and a voting process that does all it can to encourage those eligible to cast ballots. To the degree Republican are unhappy, their misery is self-inflicted.

This conniving and conning misfired. Rather than discrediting our elections or their political rivals, state Republican leaders showed their own true motives and actions.