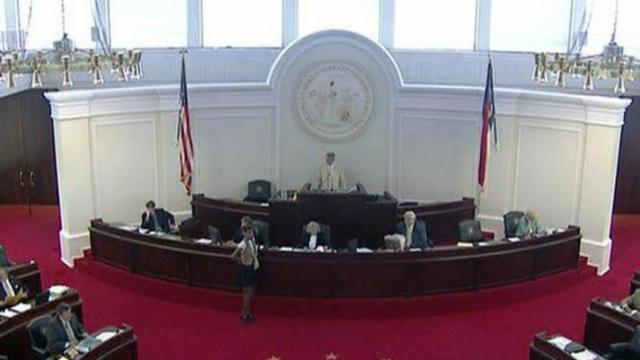 Here are just some of those which WRAL has reported on over the past few months:

Senate Bill 703, the bill to overturn outdoor smoking bans by local governments, community colleges and on beaches: Sent to Senate State and Local Government, which didn't meet to approve it this week.

House Bill 693, the proposal to require written, notarized parental permission for teens seeking counseling, psychological help, STD testing or contraception: Made it to the House floor but was re-referred to a committee that didn't meet to approve it this week.

House Bill 298/Senate Bill 365, the bill to repeal the state's solar subsidies: Despite allegedly passing committees in the House and Senate, it was re-referred in both chambers.

Senate Bill 154, Auto Insurance Reform: Had several hearings but was never voted on by committee.

House Joint Resolution 494, declaring the state could legally establish a religion: Sent to a committee and declared dead.

House Bill 983, banning commercial fishing of red drum, speckled trout and striped bass: It never got a committee vote, although it was the topic of a public hearing.

Senate Bill 138, proposing to give high school credit for Bible study: Never got a committee hearing.

Senate Bill 518, a bill to double the one-year waiting period for a divorce: Never got a committee hearing.

Senate Bill 308, a proposal to require doctors providing abortions to have local hospital privileges: Never got a committee hearing.

House Bill 208, a bill to eliminate questions about felony convictions from state employment applications: Never got a committee hearing.

Some bills every session are turned into "studies" after it becomes clear that they lack the support needed to pass. Usually, study bills direct the Legislative Research Commission to look into the issue and offer recommendations by next year's short session.

House Bill 109, which would have repealed the state's motorcycle helmet law for riders over 18, was turned into a study bill in House Judiciary B earlier this week.

House Bill 842, which would have allowed distilleries to sell their liquor products on site, was watered down to a study in House Commerce committee on Monday.

House Bill 711 would have inserted a definition of "parental rights" into state law. It became a study Wednesday in House Judiciary C.

And on the controversial topic of midwifery, six bills were filed but failed to make crossover. One of them, House Bill 204, was turned into a study bill Wednesday, also in House Judiciary C.

Neither H711 nor H204 were approved by a chamber, so they didn't technically meet  the crossover deadline. However, study bills get a second chance.

At the end of every year, lawmakers put together a "Studies" bill, which is a long list of issues they want research committees to investigate. Study bills that don't make crossover often end up in this omnibus measure.

House Bill 440 would have created benefit corporations in North Carolina law. It was voted down 60-52 after conservative lawmakers said it was anti-capitalist.

House Bill 643 would have given police officers and deputies the same whistle-blower protections as other state and local employees. It was defeated 56-54 after conservative lawmakers said it could open the door to the influence of unions or "union-like groups," threatening North Carolina's status as a "right to work" state.

After each unfavorable vote, House leaders used a parliamentary maneuver to "reconsider" the vote, essentially taking it back. The bills were sent back to committees. That move is important because it keeps the bills' subject matter alive.

if a measure is defeated by either chamber, it goes on the "unfavorable" calendar, which means its subject matter cannot be considered again for the rest of session. Reversing the vote and sending the bill back to committee lets the sponsor try again later, usually by adding it into another bill on the same topic.