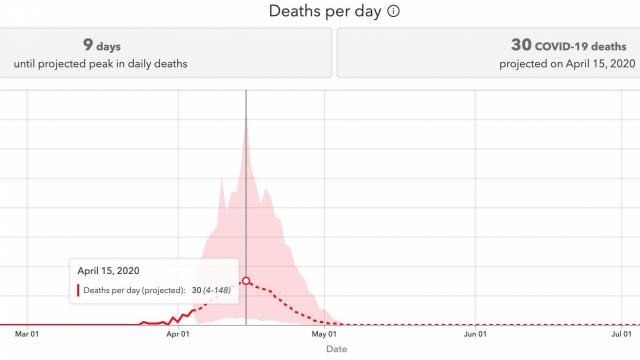 Raleigh, N.C. — A team of local health experts said Monday afternoon that hospitals across North Carolina are likely to be overwhelmed by COVID-19 patients if the state stops practicing aggressive social distancing policies designed to slow the spread of the novel coronavirus.

That scenario is far less likely, modeling shows, if the state maintains those policies beyond the end of April, when Gov. Roy Cooper's 30-day stay-at-home order is set to expire.

The projections released Monday were crafted by an independent collaboration of a dozen epidemiologists, researchers and public health experts combining three different models of the disease's spread. In a press briefing announcing the projections, researchers said the goal was to predict how likely hospitals would see shortages of hospital beds through June.

Although N.C. Department of Health and Human Services Secretary Mandy Cohen said the state had not formally commissioned the group's work, it's already been referenced as a policy tool by state officials, who set up the call with reporters Monday.

"The modeling affirms that the actions we take now will determine how this virus will impact North Carolina in the weeks and months to come," Cohen said in a press release Monday recapping the findings.

The approach differs from other models, like one from researchers at the University of Washington, which tries to predict the timing and peak number of deaths and hospitalizations of COVID-19 patients.

Aaron McKethan, senior policy fellow at the Margolis Center for Health Policy at Duke University, said the model produces akin to a weather forecast, indicating how likely demand for hospital beds will outstrip the state's supply.

As of Monday, nearly 3,000 people in North Carolina had been diagnosed with COVID-19, with 270 hospitalizations.

The model shows the number of cases increases to between 5,500 and 6,500 cases by April 15. The two scenarios – "maintain" and "lift" – are identical through April, while social distancing measures remain the same.

But after May, without those measures, the forecast shows about 750,000 people in North Carolina could be infected with the novel coronavirus through June 1. That's compared to 250,000 people with social distancing still in place.

The model assumes hospitals in both scenarios will drastically boost their bed capacity in response to the spreading virus. But that flex capacity alone, researchers said, isn't enough to significantly reduce the chance hospitals will be overwhelmed.

The surge of patients would mean that hospitals have a more than 50 percent chance of exceeding their capacity in May if social distancing policies are lifted. But if those policies are maintained, that probability drops to around 25 percent.

Pia MacDonald, senior director and senior epidemiologist at RTI International, said community buy-in was just as important as the policies themselves.

"The more we can practice social distancing and get the population to adopt social distancing, the more lives can be saved," MacDonald told reporters during a press briefing on the new model Monday afternoon.

Researchers stressed that the work, which has not been peer-reviewed, is still preliminary and will be revised with additional data over time.

They also added that they're not recommending any specific policies – just those that have had similar impacts as the ones currently in place.

University of Washington slashes its forecast

Meanwhile, University of Washington health researchers have substantially lowered their forecast of projected deaths in North Carolina as a result of COVID-19.

The Institute for Health Metrics and Evaluation, an independent population health research center at the University of Washington School of Medicine, now predicts North Carolina will see about 500 total deaths from the disease through early August. That's less than a third of the 1,500 deaths forecast in the researcher's most recent model, released April 2.

Researchers expect the peak will arrive next week – a week earlier than previous models suggested.

The latest model predicts North Carolina will see a peak of 30 deaths a day on April 15. And despite previous models that showed a shortage of hundreds of intensive care beds, the latest projections show hospitals should have enough beds to care for patients during the mid-April surge.

Reporters at WRAL News are tracking real-time updates of the latest cumulative totals of lab-confirmed COVID-19 cases and deaths across North Carolina. The number of patients currently hospitalized are reported daily by the N.C. Department of Health and Human Services every morning and are a reflection of a daily survey of hospitals. Because the response rate of that survey varies day to day, we're showing a rolling 7-day average of hospitalizations calculated since the state began reporting numbers consistently on March 24.

The upper estimate of total deaths dropped considerably – from about 3,000 to 750 in the most recent update.

But there's now more uncertainty about the daily deaths the state will see at the peak of the pandemic.

IHME's previous model estimated peak daily deaths in North Carolina would be between 8 and 107 in late April. The updated model now puts that number at between 4 and 148 deaths a day on April 15.

In a post explaining the changes Sunday, researchers wrote that the revised estimates are the result of better data from death rates in more locations and refined estimations of the impact of social distancing policies, among other factors.

CORRECTION: A previous version of this story misspelled the name of Pia MacDonald, senior director and senior epidemiologist at RTI International.