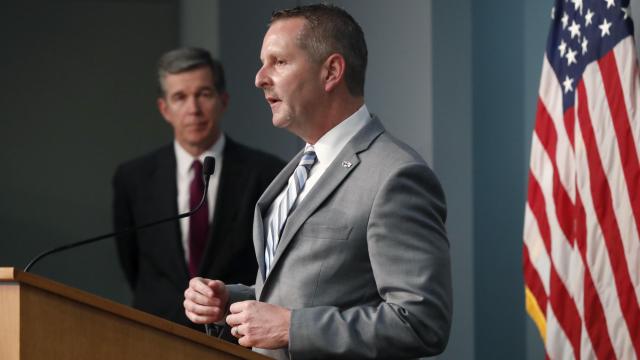 The email sent to staff at Piedmont Correctional Institution in Salisbury on Friday, June 5, had a sense of urgency.

“ALL HANDS ON DECK!” it began, in capital letters.

Barrier’s email came three days before inmates would begin coming to North Carolina’s prisons from county jails across the state for the first time since early April. Transfers of some inmates between prisons, which had been slowed, had already resumed in late May.

But some medical experts expressed concern that resuming transfers would increase the chances that COVID-19 would be spread further inside the prisons. And documents obtained by a collaborative network of reporters across the state show that some symptomatic inmates have been transferred between facilities since the outbreaks began — moves prison officials say are consistent with medical guidance.

Late on Monday — the same day inmates began flowing back into Piedmont CI and other prisons — a state judge issued an order requiring inmates to be tested for COVID-19 before being transferred. The judge also outlined other measures aimed at correcting a “deliberate indifference” he found prison officials had toward the health and safety of inmates during the pandemic.

In statements to the media, including one in response to questions for this story, state prison officials have said otherwise, maintaining that they have transferred inmates and operated their facilities in line with CDC guidelines.

The N.C. Department of Health and Human Services started releasing the total number of patients tested, including those conducted by private labs and public health departments, on March 18. This figure only reflects labs that are reporting to local and state health officials. DHHS doesn't publish raw numbers detailing daily negative and positive tests from labs reporting both of these figures - just percentages. So WRAL is calculating the percentage of positive tests here cumulatively, instead of day over day, to avoid any potential skew of daily figures by either a lag in the reported number of positive/negative cases or a surge in positive cases from labs that don't report both positive and negative results. NOTE: On Aug. 12, DHHS announced a major correction to their testing numbers after discovering a discrepancy with their submissions from LabCorp dating back to April 24. The WRAL team is working to update this graphic to account for the changes, so updates have been paused until then.

Transfers resume amid a spike in COVID-19 cases

As prison officials were resuming the transfer of inmates between prisons and preparing to accept new inmates from county jails across the state, state public health officials were watching the biggest jumps in COVID-19 cases to-date.

On Saturday, the N.C. Department of Health and Human Services reported 1,370 new COVID-19 cases statewide, the largest single-day jump since the start of the pandemic. And on Tuesday, DHHS reported that 774 people were sickened enough to be hospitalized — another single-day high.

North Carolina prison leaders say that before transferring inmates, staff check temperatures and ask screening questions to determine if inmates have symptoms of COVID-19. As of March 24, prison officials said, all inmates transferred to new facilities must be quarantined for 14 days.

But some public health experts say checking for symptoms isn’t enough to stop the spread of the virus. Research has shown that many COVID-19 carriers report no symptoms or have an extended pre-symptomatic phase where they are contagious but show little sign of illness.

In an affidavit written as part of the lawsuit filed by the ACLU and other inmate advocates, Lauren Brinkley-Rubinstein, an assistant professor in the Department of Social Medicine at the University of North Carolina at Chapel Hill, said that without widespread testing, the prisons would not be able to prevent the spread of the virus.

“As inmate transfers between facilities begin again without a comprehensive testing regime in place, NCDPS is likely to introduce massive risk of outbreak to the population,” Brinkley-Rubinstein wrote.

So far, state data shows North Carolina has tested fewer than 6 percent of state prison inmates — a far lower percentage than some other states.

In early May, Tennessee was the first state to enact a plan to test all staff and inmates in state prisons. And on May 12, the Texas Department of Criminal Justice announced the mass-testing of inmates through self-administered tests after seeing a surge in illness and deaths among inmates and staff.

In a statement early Monday afternoon before the judge’s ruling, John Bull, a prison spokesman, declined to respond when presented with Brinkley-Rubinstein’s opinion, citing the ongoing ACLU litigation.

Alison O. Jordan, a public health consultant from New York who has expertise in jails and prisons, said she would recommend quarantining every inmate for 14 days after they’re transferred, then testing each of those inmates. Inmates should not be released to the general prison population until they test negative, she said.

Before transferring significant numbers of inmates, Jordan said, prison officials would be wise to do what public health experts recommend: conduct widespread testing and contact tracing, provide ample sanitation and protective equipment, ensure social distancing and release all the inmates they safely can.

"Absent that, I'd expect to see more infections and more deaths," she said.

Amend, a team of medical experts at the University of California, San Francisco that focuses on the health of inmates and prison workers, recommends restricting all non-essential movements in and out of prisons.

“In the event an offender tests positive after transfer or on intake, contact tracing is conducted to determine, if possible, if anyone was directly exposed to the virus during transportation and medical quarantine/medical isolation protocols then are enacted as warranted in keeping with guidelines by the Centers for Disease Control (CDC) and North Carolina Department of Health and Human Resources (DHHS),” Bull said.

He also pointed to a previous press release from prison officials that outlined safety steps being taken when transferring inmates.

In responding to questions for this story, Bull also pushed back on the notion that inmates or staff members would need to go into quarantine just because they came into contact with someone who was confirmed to have COVID-19.

“Medical quarantine for others may not be necessary just because someone tests positive for COVID-19 after transportation or on intake,” Bull said. “Under CDC guidelines, medical quarantine for others would not be necessary if masks (especially N95 types) are worn during transport, if hand sanitizing and social distancing is practiced per transportation protocols and if the positive case was asymptomatic.”

New laboratory confirmed cases and deaths are based on daily reporting from the N.C. Department of Health and Human Services via the agency's COVID-19 dashboard. The dashboard started publishing case counts on March 13 and death counts on March 26. Because these case and death numbers can lag slightly based on the time it takes labs to process tests and health officials to confirm cases, we're also calculating a seven-day rolling average to show the curve of cases. NOTE: This chart now includes cases and deaths identified through antigen testing, which DHHS began reporting on its dashboard on Sept. 25. Read more about the corrections and compare the changes here.

Documents produced by prison officials to lawmakers late last month show three staff members from Johnston Correctional Institution were tested for COVID-19 in mid-April after being in a prison bus with an inmate who tested positive with the virus.

The virus landed inside Pasquotank Correctional Institution, in northeastern North Carolina, in early April, after prison officials transferred 36 inmates there from Neuse Correctional Institution in Goldsboro. Mass testing revealed in mid April that Neuse was the site of the state’s largest COVID-19 outbreak, with more than 460 inmates infected.

Prison officials say they didn’t test the 36 inmates for COVID-19 before transferring them to Pasquotank on April 2. But after taking their temperatures and asking them screening questions, prison officials determined the inmates had no symptoms, according to state prison commissioner Todd Ishee.

The inmates were quarantined at Pasquotank, which at the time had no COVID-19 cases. Four of the prisoners who were transferred subsequently tested positive for the coronavirus, prison officials said. Soon, a total of 19 inmates at Pasquotank had tested positive.

At Foothills Correctional Institution, in Burke County, staff members have expressed concern about a growing exposure to COVID-19 at their prison after inmates with symptoms were transferred there.

According to an internal email sent to staff by prison warden Teresa Jardon and obtained by the reporting collaborative, two inmates were transferred to Foothills from Wilkes Correctional Center, a minimum custody prison, after a third inmate at Wilkes was confirmed to have COVID-19.

The two inmates sent to Foothills, the email shows, were experiencing symptoms before they were transferred, but were not tested beforehand.

“An offender housed at Wilkes has tested positive for COVID-19. The offenders we received for isolation appear to be symptomatic and have been tested (results are still pending),” Jardon, the warden, wrote in her email to staff.

Staff members at Foothills were not made aware of the two symptomatic inmates being transferred to their facility until they had arrived, the email shows.

“I hope by being completely transparent about the situation, it will keep the ‘rumors’ down and away from the media,” Jardon wrote.

In his email, Bull, the prison spokesman, said the inmates showing symptoms of COVID-19 were transferred to Foothills because the prison has single-cell housing and has been designated a regional medical isolation facility.

Bull said eight Wilkes inmates had been confirmed to have COVID-19 as of Monday and each inmate had been transferred to Foothills.

Ruling in response to the ACLU lawsuit, Rozier on Monday said prison officials had acted with “deliberate indifference” toward the health and safety of inmates, likely violating the Eighth Amendment prohibiting cruel and unusual punishment.

Rozier also found prison officials had violated the North Carolina Constitution, specifically the state’s responsibility to care for the medical needs of inmates.

“This Court holds that the risk of irreparable harm is present, including the risk of COVID-19 rapidly spreading throughout the vulnerable prison population, along with the substantial risk of death and long-lasting disability stemming from the disease,” Rozier wrote in his memo.

Bull, the prison spokesman, said prison officials were consulting with lawyers at the North Carolina Department of Justice to determine next steps.

In his order, Rozier directed prison leaders to take steps to address overcrowding and social distancing, transfers and internal conditions that vary from prison to prison.

Rozier ordered that no inmate should be transferred without either a COVID-19 test or being placed in isolation for 14 days.

The order also requires prison officials to come up with a plan to test all inmates in the state’s prison system and, separately, to create a plan to identify the disparities in prevention strategies that exist between different prison facilities. Both plans are due by June 22.

“An inmate’s chances of contracting COVID-19 should not depend upon the facility in which the inmate is housed,” Rozier wrote.

This story was jointly reported and edited by Kate Martin, Jordan Wilkie and Frank Taylor, of Carolina Public Press; Gavin Off, Ames Alexander and Doug Miller, of The Charlotte Observer; Nick Ochsner, of WBTV; Emily Featherston, of WECT; Tyler Dukes, of WRAL; and Jason deBruyn, of WUNC-FM.