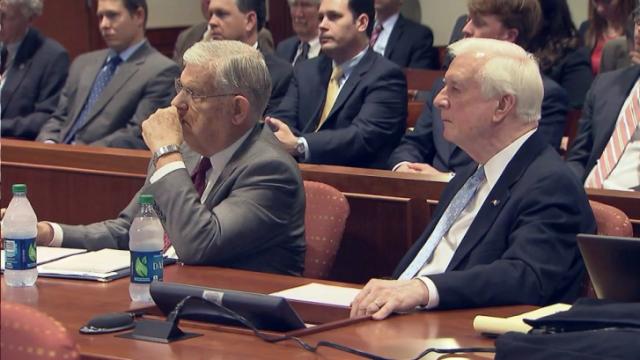 Raleigh, N.C. — While a shift in administrations may be a motivation for a legislative effort to strip power from incoming Democratic Gov. Roy Cooper, a top lawmaker said Thursday that the move has been in the works for almost a year because of a dispute with outgoing Republican Gov. Pat McCrory.

McCrory fought the lawmakers over appointments to the Coal Ash Management Commission and two other state panels, saying the General Assembly was exerting too much control over groups that carried out executive branch functions. The state Supreme Court agreed, saying lawmakers had overstepped their authority and had violated the separation of powers.

Rep. David Lewis, R-Harnett, the chairman of the powerful House Rules Committee, said lawmakers are now merely trying to rebalance state government and reclaim powers that rightfully belong to them through the passage of House Bill 17.

The measure, which cleared the House Thursday and will be debated in the Senate on Friday, calls for Senate approval of Cooper's nominees to head cabinet-level agencies and takes away his power to appoint members to boards of trustees at University of North Carolina system campuses, among other provisions.

"The ruling that came from the North Carolina Supreme Court fundamentally changed the way that executive and legislative power works together – who does what, who has effective control of different enterprises," Lewis said. "Frankly, it strengthened the office of the governor at the expense of the legislature.

"In response to that, this legislature is returning to its constitutionally vested authority to appoint members of university boards of trustees, a constitutional power that it had, by statute, for years allowed the executive to exercise," he continued.

The advise-and-consent provision for cabinet secretaries also is a power given to the General Assembly in the state constitution, Lewis said.

"What I hope it does is show that the General Assembly wants to be able to communicate with the governor and with the agency heads that the governor names, wants to develop a relationship, get to know these folks and understand that we are working together and that there is public trust that is being bestowed on them as they indeed lead these agencies," he said.