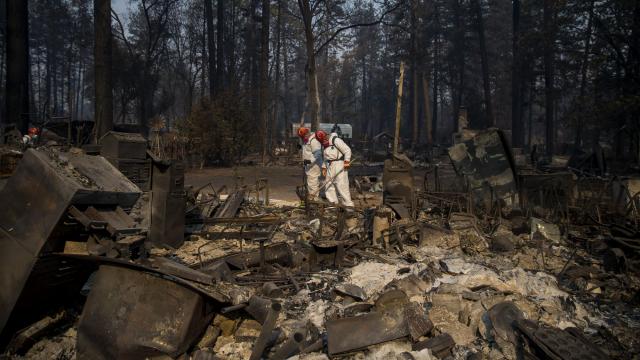 OJAI, Calif. — There is the original commencement address that Aldous Huxley gave in 1951, saved from a burning boarding school in Ojai. There is a tattered and singed American flag too. And on wall after wall of the Ojai museum are photographs of fire and destruction.

It was only a year ago that a wildfire set a ring of flames around this rustic city northwest of Los Angeles. But the fire is already part of a retrospective exhibition that tries to make sense of the tragedy, even as homes remain destroyed and the trauma remains fresh.

The Thomas Fire that laid waste to sections of Ojai briefly stood as the largest in the state’s history, only to be eclipsed in August by the Mendocino Complex Fire. Then came the devastation of recent days in Paradise, in Northern California, a blaze never before seen in modern California history. The Camp Fire has reduced Paradise to ash, and so far authorities have identified 71 people killed, with more than 1,000 listed as missing. Before that, a fire in 1933 in Griffith Park, Los Angeles, stood for decades as the state’s deadliest, with 29 people killed.

So it is in California that as one community, Paradise, is only starting to comprehend its losses in what is now the deadliest and most destructive fire in state history, another community, Ojai, a bohemian idyll in a valley not far from the Pacific Ocean, is coming together to remember its last big wildfire — and to worry about when the next one might come.

“When we started talking about this exhibit earlier this year, I don’t think it occurred to us — we didn’t even think about it — that it would be fire season,” said Wendy Barker, director of the Ojai Valley Museum. She added that she felt uneasy about opening the show at a time when the state, yet again, is on fire: in the north, in Paradise, and in the south, with the Woolsey Fire, near Malibu and parts of Ventura County, not too far from Ojai.

But this is California, where these days fires seem to be raging all the time.

Barker, whose exhibition included the maps of fires that burned near Ojai throughout its history — in 1929, 1932 (for decades the largest in state history), 1948, 1979 and 1985 — said that in the past, after a fire, residents would at least have the respite of believing they would have many years before the next one.

“But do we?” she said. “I don’t know. It’s scary. These aren’t isolated incidents anymore.”

Stephen Pyne, a historian of wildfire at Arizona State University, said it had been a century since a fire in the United States caused deaths on the scale of the Camp Fire. That was the Cloquet Fire, in 1918, in Minnesota, which started with sparks from a railroad and killed nearly 500 people.

“We do seem to be at a tipping point,” said Pyne, adding that there needs to be new thinking on zoning, and where homes are built, as well as on how to manage forests in the face of growing danger. “If last year didn’t do it, if that didn’t lead to a massive and immediate response then what would? Well, this, within a year of the fires of 2017, and this one that has destroyed so much. This is shaping up to be a major moment on the time line.”

Edward Struzik, a historian and a fellow at Queen’s University in Kingston, Canada, noted that most of the largest fires in California history had occurred in recent years. In fact, nine of the 10 largest have occurred since 2003.

“It’s going to get worse,” he said. “I don’t think there’s any question about it. We’re seeing a trend here very clearly. Nobody expected it to happen as quickly as it happened. This is a head-spinning trajectory, these past few years in California.”

Heather and Bob Sanders, who have lived in Ojai since 1976, are among those who lost their home in Upper Ojai in the Thomas Fire, where about 100 houses burned to the ground. These days they are living on their property in a trailer, with hopes of rebuilding. Others are doing the same, or living elsewhere in mobile homes as they wait to rebuild.

Describing the process of rebuilding, Sanders said, “It’s just a stack of papers.” Just the other day, a geological survey of his property was finally finished, which will now allow him to apply for a building permit.

The couple’s story is included in a new book, “From the Fire: Ojai Reflects on the Thomas Fire,” published by two local residents. One of them, Elizabeth Rose, is a lawyer from Massachusetts who a few years ago moved with her husband to Ojai. The Thomas Fire was her first wildfire experience, and she evacuated immediately. Right away, she started noticing all the poems and reflections of the fire flooding Facebook. “There was such beauty in people’s words,” she said.

Her publishing partner, Deva Temple, who grew up in Ojai but now lives in Oregon, was drawn to the photographs that emerged from the fire.

Temple, who has organized conferences on climate change, which scientists say has led to prolonged periods of abnormally high temperatures, dry conditions and ever-larger fires, said: “I knew this wasn’t going to be the last huge fire, but one of the first of the huge fires. The whole landscape of the west is going to change.” Sanders, speaking about losing her home, says in the book: “But life goes on and now we’re dealing with it, though there are just too many things to do. And I don’t think a lot of people know what so many of us are still dealing with from this fire. We’re still figuring out how to rebuild.”

Others who lost homes in Ojai decided to pack up and start again somewhere else, where housing is cheaper and where wildfires are not a danger.

“We didn’t want to go through that again,” said Lauren Crow, 32, who moved to Portland, Oregon, with her partner after losing her hand-built tiny house — and her startup skin care business — in the Thomas Fire.

All of this is just a tiny version of the grief and trauma that has engulfed Paradise, where thousands of homes were lost and possibly hundreds killed. Even so, officials there are already talking about rebuilding. As some spoke of restoration at a community meeting in Chico, near Paradise, on Thursday night, Mark Brown, a local official, described the devastation as “at the scale of unprecedented magnitude,” The Los Angeles Times reported.

The destruction in Paradise is likely to reverberate around California, as people in other places wonder if their town could be next.

“It’s not like people are buying McMansions in a rural spot,” said William Stewart, an expert on forestry at the University of California, Berkeley. “These are places where people have been since the Gold Rush in some places, or at least for many decades. We’re now having these historical towns where people are starting to look around, and think: ‘We’re not that different from Paradise. Could that happen to us?'” On Thursday afternoon, Tania Parker, director of advancement at the Ojai Valley Land Conservancy, walked a dirt road on the north side of town where firefighters defended the city from the flames last year. Parker, 37, was a young girl during a fire in 1985 in Ojai, and she later studied wildfire and forest management in college. Her father owns the movie theater in town, and she recalled evacuating there, and sleeping on cots, during the blaze.

Parker woke up in the middle of the night last year as the Thomas Fire began spreading across the mountains that surround Ojai.

“Having studied fire and knowing the conditions of the wind, it was a just a perfect storm,” she recalled. “It was so surreal and intense.”

There are a few burned sycamore trees left, but little other signs of the fire. Grass has grown back on the hillsides, but Parker said it would take five to seven years for the native plants to grow back and stabilize the earth. Until then, the town is at risk of another menace: mudslides. Metal posts were put in the ground, which will not stop the mud but will hold back large boulders, which tore a destructive path through nearby Montecito this year in the aftermath of the Thomas Fire, killing more than 20 people.

Could what happened in Paradise have happened — or still happen — in Ojai?