Zoe's Kitchen, a Mediterranean-inspired, casual restaurant with locations already in Raleigh, is expanding to Morrisville

The new Zoe's Kitchen opens today in the Park West Village Shopping Center, 1017 Market Center Drive at the corner of Cary Parkway and Chapel Hill Road. They will be open 11 a.m. to 9 p.m. daily.

Zoe's has soups, salads, hummus and deli and grilled sandwiches, in addition to entrees like chicken kabobs. They also sell prepared dinners for four.

(They also have limeade – very tasty!) 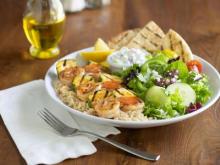 Check out their website to see the full menu

To celebrate the opening of its new store, Zoe's is giving away 500 meals to its Facebook fans, with one grand prize winner getting free Zoe's for a year at the Morrisville location.

This is the ninth Zoe's Kitchen in the state. They already have locations in North Hills and off of Oberlin Road in Raleigh.