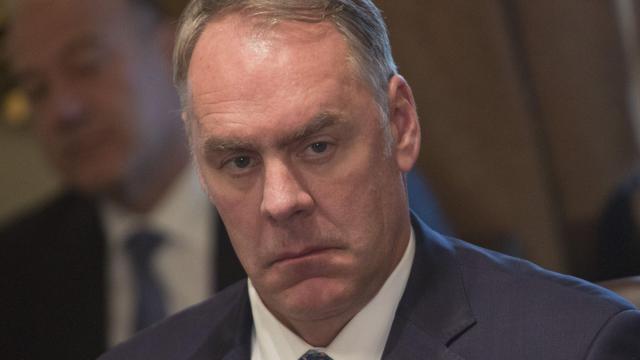 (CNN) — Interior Secretary Ryan Zinke is blaming "radical environmental groups" for a lack of forest management that he says are spreading the deadly California wildfires.

In a Tuesday conference call with reporters, Zinke criticized "lawsuit after lawsuit by, yes, the radical environmental groups that would rather burn down the entire forest than cut a single tree or thin the forest."

Asked which groups, Zinke declined to name names. He acknowledged been an historic drought in California and rising temperatures, but primarily focused on all parties working together to manage forests.

"If not doing anything to the forests kept them pristine, I'd be all for that. That's the problem," Perdue said on the call with reporters. "That's been the theory from well-meaning environmentalists over the years, is that a forest that you did nothing to was pristine. We know that's not to be the case."

Together, Zinke -- who oversees the Bureau of Land Management, National Park Service, and Fish and Wildlife Service -- and Perdue, along with the Forest Service, manage the vast majority of federally-owned land in the U.S.

Zinke's comments echoed an interview he gave with Breitbart News on Sunday.

"I will lay this on the foot of the environmental radicals that have prevented us from managing the forests for years, and you know what, this is on them," Zinke told the conservative news outlet.

At one point, Zinke told the outlet it's "not time for finger-pointing" -- right before he pointed fingers at "radical environmentalists."

"This is where America stands. It's not time for finger-pointing. We know the problem: it's been years of neglect, and in many cases, it's been these radical environmentalists that want nature to take its course," Zinke said in the Sunday interview. "We have dead and dying timber. We can manage it using best science, best practices. But to let this devastation go on year after year after year is unacceptable."

The interior secretary and former Montana congressman has made similar comments over the last week with regard to the wildfires, which have killed scores of people.

Zinke's comments come after President Donald Trump surveyed the devastation in Northern California on Saturday and suggested raking the forest floors to prevent future wildfires, claiming the President of Finland suggested this method to him. Finnish President Sauli Niinistö said he doesn't recall discussing this tactic with Trump.

After briefing the President on the status of the fires, Zinke said Trump was "engaged."

"We need to actively manage our forests, and the president is absolutely right," Zinke told Breitbart. "This is as much about mismanagement over time -- it wasn't just the last administration. This has been going on for years."

Chad Hanson, a research ecologist with the John Muir Project and a national director of the Sierra Club, has pushed back against the Trump administration's reasoning for the devastation.

"It is deeply troubling that Trump and his administration would support logging as a way to curb fires when studies have shown it's ineffective," Hanson wrote in a CNN op-ed over the weekend. "In the most comprehensive scientific analysis conducted on the issue of forest management and fire intensity -- which looked at more than 1,500 fires on tens of millions of acres across the Western United States over three decades -- we found that forests with the fewest environmental protections and the most logging actually tend to burn much more intensely, not less."