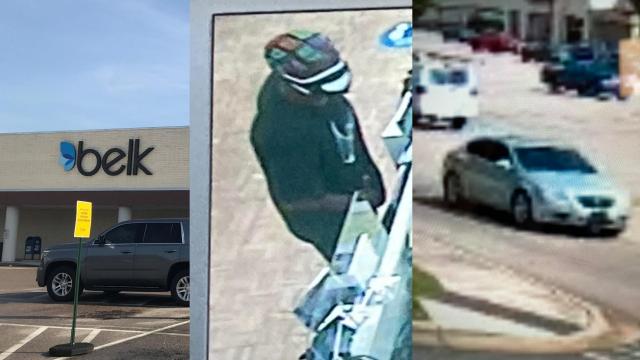 Zebulon, N.C. — Zebulon police are asking for the public's help with information after the robbery of a business on Wednesday.

Police responded to the Hudson Belk at 164 Wakelon Dr. at around 3:15 p.m. to a report of a robbery. Investigators said the suspect entered the store wearing a mask and a multicolored skull cap. The suspect had a black semi-automatic handgun and demanded money from several cash registers. An undisclosed amount of cash was taken.

Officials said the suspect then ran from the store and got into a silver in color Buick LeSabre four-door passenger vehicle with tinted windows. The vehicle was driven by another person, left the scene and was last seen heading west out of the parking lot towards North Arendell Avenue.

The suspect can be seen in the photo above. He is between 5-foot-8 and 6-foot-0 with a medium build. He was wearing black pants, a black shirt with a white Nike symbol, a multi-colored skull cap, a black mask with a white smile on it and white tennis shoes.