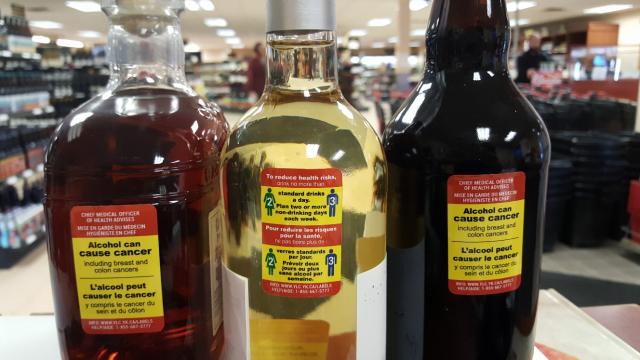 The brightly colored labels began appearing on bottles and cans of beer, wine and liquor in a government-owned store in Yukon Territory a month before Christmas.

The brainchild of a research project financed by the Canadian government on how to prevent excessive drinking, the labels warned of the health risks of alcohol consumption and were meant to be in place for eight months as an experiment.

But within a month, the experiment was halted.

The government stopped affixing the labels after several alcohol industry lobbying groups challenged both the research study and the legality of the government’s participation.

John Streicker, the member of the Yukon government’s Cabinet responsible for the territory’s liquor stores, said he believed the government faced litigation if it continued to use the researchers’ labels.

With a population of 36,000, the territory is not in a financial position to take on the global alcohol industry in court, he added.

“The costs that we could be facing are significant,” Streicker said. “We need to do the responsible thing, which is to judge whether that’s the best use of our money for our citizens. The hard choice is whether to pay for lawyers or whether to pay for harm reduction.”

Lobbying groups representing Canada’s breweries, wineries and distilleries, Streicker said, suggested that the labels might harm their brands and asked about the territory’s legal right to apply them. The industry also suggested that putting stickers on their bottles and cans infringed trademarks, he said.

In interviews Wednesday, the presidents of Beer Canada, the brewers’ trade group, and of the Association of Canadian Distillers, said they had not threatened legal action. But Jan H. Westcott, president and chief executive of the distillers’ group, repeatedly criticized the validity of the information on the labels and the work of the researchers themselves.

“I don’t think that the way that they’ve approached it is actually going to provide results that are useful or legitimate necessarily,” Westcott said of the peer-reviewed study.

Streicker said, “If it was to go to court I think they would use all avenues open to them to try and challenge this study.”

The label experiment was part of a 4-year-old project led by Erin Hobin, a scientist at Ontario province’s public health agency, in cooperation with the University of Victoria in British Columbia. The research is financed by Health Canada, a federal department.

The sale of alcohol is controlled by provincial and territorial governments and, in most of Canada, largely sold through government-owned stores. Tim Stockwell, director of the Canadian Institute for Substance Use Research at the University of Victoria, who is also involved in the project, said Yukon’s alcohol retailer was the only one in Canada willing to test the stickers.

Yukon has the highest per capita sales of alcohol in the country, adding to the researchers’ interest.

Focus groups with drinkers were held over about two years within Whitehorse, the capital of the Yukon. Hobin said they showed strong support for health warnings on liquor bottles.

“There is just very low availability of information about health hazards around alcohol,” said Hobin, whose research indicated that three-quarters of drinkers in the Yukon were not aware of the link between some cancers and alcohol.

In November, the American Society of Clinical Oncology released a statement indicating that even light drinking could slightly increase a woman’s risk of breast cancer and increased the chances of developing a common form of esophageal cancer. Alcohol was first linked to a variety of cancers by a branch of the World Health Organization in 1987.

The plan was to stick labels on the bottles for eight months and then use sales data and follow-up interviews to assess their effect on drinking. Liquor stores and drinkers in the neighboring Northwest Territories would have been a control group.

Yukon has been putting stickers about drinking during pregnancy on alcohol for nearly 30 years.

The study’s labels, however, were larger and more brightly colored than the previous ones used in Yukon liquor stores.

One offered a slimmed-down version of Canada’s alcohol drinking guidelines, which were developed with the alcohol industry’s participation. The other warned that alcohol can cause cancer.

Hobin said their designs were influenced by Canada’s mandatory warnings for cigarette packages that featured grisly photos of smoking-related diseases. But in comparison, the alcohol labels are subdued.

While the territory’s stickers about drinking during pregnancy never attracted attention from the alcohol industry, Streicker, the Yukon government official, said he soon heard about the study’s labels.

Westcott, president of the distillers’ group, said, “We think these are pretty complex issues and simply putting them on a label is not necessarily the best way to do that,” adding that he did not think that Whitehorse was an appropriate place for the study because of its comparatively small population and remoteness. Luke Harford, president of the brewers’ lobbying group, said he was concerned that some shoppers might conclude that the label about the drinking guidelines — which recommends abstinence twice a week — could be misinterpreted as a safe amount of drinking before driving.

As for the other label, Harford said, “It’s this very alarming statement that this is going to cause cancer.”

Although both Harford and Westcott said they never suggested that their organizations or their members would sue if the labeling continued, they also acknowledged that they asked, as Westcott put it, “what legal authority they had to put the labels on the products.” The government, he said, has not “provided that information.” Stockwell of the research project said the federal government, the provinces of Ontario and British Columbia and his university also received complaints from the alcohol industry.

Robert Solomon, a professor of law at the University of Western Ontario in London who has specialized in drug and alcohol policy for more than 40 years, said rulings by the Supreme Court of Canada about warnings on cigarette packages clearly gave the Yukon government the right to add its labels. He dismissed the idea of trademark or defamation lawsuits as “without merit.”

“It’s somewhat sad that the industry opposes making consumers aware of the harms related to alcohol,” Soloman said. “The alcohol industry doesn’t really want the public to look at alcohol as a drug. It’s a drug that imposes health costs.”