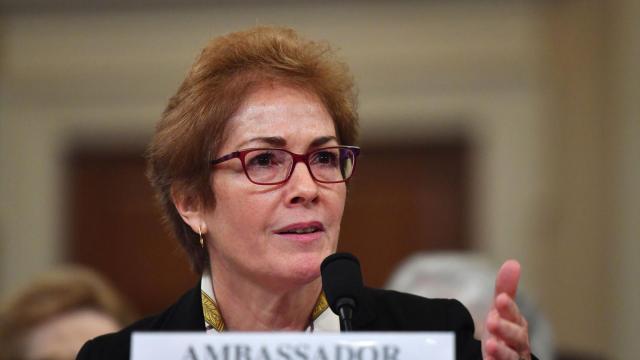 CNN — Retired Ambassador Marie "Masha" Yovanovitch -- a highly respected career diplomat who unwittingly became one of the central figures in the impeachment drama -- warned about the degradation of the State Department and took veiled jabs at the Trump administration in her first public remarks since leaving the diplomatic service.

Speaking at an event at Georgetown University on Wednesday where she was honored for "Excellence in the Conduct of Diplomacy," Yovanovitch called for a "vigorous Department of State" to regain its stature in the nation's capital, warning that "right now the State Department is in trouble."

The retired career foreign service officer, as she did in her testimony before the House during the impeachment inquiry, cautioned that the department was being "hollowed out" and helmed by "senior leaders (who) lack policy vision, moral clarity and leadership skills."

"The policy process has been replaced by the decisions emanating from the top with little discussion," Yovanovitch said Wednesday. "Vacancies at all levels go unfilled and officers are increasingly wondering whether it is safe to express concerns about policy, even behind closed doors."

"We need to re-empower our diplomats to do their job. We can't be afraid to share our expertise or challenge false assumptions," Yovanovitch said. "Working off of facts is not the trademark of the deep state but of the deeply committed state in the words of Ambassador McFaul. Truth matters," she added, referring to the former ambassador to Russia Michael McFaul.

Yovanovitch said the department needs "a coherent foreign policy," one that is "principled, consistent and trustworthy."

"To be blunt: An amoral, keep-'em-guessing foreign policy that substitutes threats, fear and confusion for trust cannot work over the long haul, especially in our social media-savvy, interconnected world," Yovanovitch said. "At some point, the once-unthinkable will become the soon-inevitable: that our allies, who have as much right to act in their own self-interest as we do, will seek out more reliable partners, partners whose interests might not align well with ours."

She quipped that international institutions -- which have faced the ire of President Donald Trump throughout his tenure -- need "a reboot, not the boot." Yovanovitch was critical of the Trump administration's proposed 22% cut to the budget for the State Department and the US Agency for International Development.

Despite her warnings, Yovanovitch said she remained "optimistic about the United States and the future of American diplomacy.'

"Some people say I'm too optimistic, and that may be, but throwing up our hands is a self-fulfilling prophecy," she said. "In these trying times, optimism is no longer a default setting for many of us -- it's a choice."

"We always have a choice," Yovanovitch added, to applause.

Yovanovitch's appearance at Georgetown, where she received the J. Raymond "Jit" Trainor Award for Excellence in the Conduct of Diplomacy, elicited strong shows of support and praise. The audience gave her multiple standing ovations. Bill Taylor, who took over the role of top diplomat in Ukraine when she was recalled and also served as a key impeachment witness, was one of the many diplomats in the audience.

"Though she did not seek the role, she has become the face of the very ethos of public servants,' said Joel Hellman, the dean of the Edmund A. Walsh School of Foreign Service at Georgetown. "This is what intellectual courage looks like. This is what a moral compass looks like."

Yovanovitch was one of those most affected by developments related to the impeachment. She was forced from her post as the US ambassador in Kiev in May 2019 after a targeted campaign against her led by allies of Trump. Yovanovitch served as a witness in the House impeachment inquiry, testifying both publicly and privately. She was repeatedly maligned by Trump -- including on a call with Ukrainian President Volodymyr Zelensky. Although the diplomatic corps continually rallied to her side, Secretary of State Mike Pompeo repeatedly failed to defend her from attacks. In a recent interview, Pompeo denied that he felt any "moral tension" about how she had been treated.

Yovanovitch, who retired from the State Department last month, on Wednesday reflected on the developments of the past year with good humor.

"I think one of the things that has sustained me is the support of all of you. You know, when you go through some things," she joked, using the threatening words that the US President had used on that July call, "you have to dig deep a little bit."

"During some of those times, I lost my sense of humor, but I'm glad I found it again, because that is also very helpful," she said.