Efforts to carve out space as an ideal location for families with children is paying off for the City of Wilson.

City officials believe Wilson's ability to grow, while the surrounding counties' populations have declined, is in large part due to proactive leadership.

"We've had a concerted effort across the community to position Wilson for the future," said Wilson City Manager Grant Goings. "Wilson has always had a great quality of life and slower pace compared to metropolitan areas, making it a great place to raise a family. The investments we've made are paying off, with much more to come."

This foresight, along with community participation from volunteers and corporate sponsors, led to the construction of the Gillette Athletic Complex. The complex's multiple soccer and baseball fields have given the youth leagues a place to expand.

Carey McKeithan, a youth soccer coach, said Gillette is like no other sports complex he’s ever encountered.

"I've lived in several states; this is probably my eighth place I've ever lived," McKeithan explained. "I will tell you, this is our favorite place we've ever lived, and we've never seen a complex like this. This is incredible. Whether it's the soccer fields or the baseball fields, I mean, they could host any type of tournament here at this Gillette Field. It is incredible." 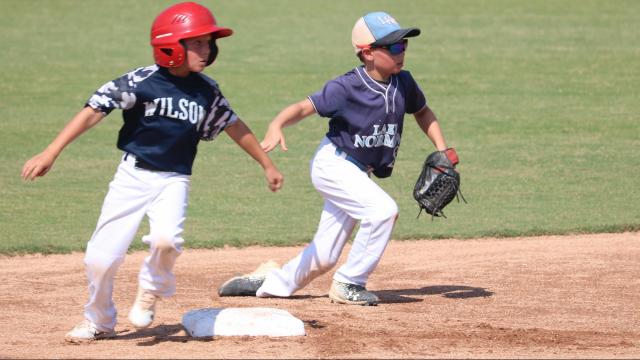 Jordan Phillips, the athletic supervisor for the City of Wilson, described a typical Saturday as involving 54 games, 110 teams, more than 1,000 players, and 3,000 parents and spectators. He said the popularity of these programs continues to grow and is a source of unity for Wilson.

"[Wilson is] a small community, but still has this," McKeithan said, lifting his arms up and looking around toward the surrounding sports fields. "It has Gillette Field, it has the restaurants, it has all the major chains, it's close to the beach, but just a hometown feel."

He added, "We've felt comfortable here, and it's been our favorite place we've ever lived -- my wife and I -- and I wouldn't change a thing."

While youth athletics is a major draw for families to Wilson, the city has also developed other family-friendly activities and organizations, like Imagination Station -- an educational museum -- and the Arts Council of Wilson -- a group providing theater camps, music lessons, and other arts and crafts opportunities to local families.

Karyna Parrish, a parent of one of the theater participants, described the two-week theater camp put on by the Arts Council of Wilson as an opportunity for children to get "an idea of what it's like to be in a production, and vocal techniques and acting techniques and costuming and a little bit of set design."

She said, "They do three-to-four major productions a year, all with children under 18. Then we do two summer camps during the summer, and a one-week camp, which we completed a few weeks ago, where we did the 'Lion King.' "

Parrish said the Boykin Theater, which is a restored 1919 movie theater in downtown Wilson, gets a lot of compliments. The Arts Council not only uses it for its theater productions, but also their youth painting, dance and music classes.

Housed in a 1928 federal courthouse and post office building, Imagination Station is now completely transformed into an interactive science and history museum that residents say is a must-visit destination for families.

The child-focused museum has exhibits on planets, bees, snakes, a mock courtroom (which used to be the real courtroom), a dedicated birthday party room and much more.

"This is a community that believes in its people," said David Lee, Wilson's Parks and Recreation director. "It's just growing, and growing at an incredible pace to be honest with you. And we've got a really bright future ahead of us."