Bear Creek, N.C. — At Chatham Central High School, Aedrin Albright teaches civics to 10th grade students, educating them about the impeachment process and the role political parties have within the process.

Albright has been including impeachments into her curriculum ever since she started teaching civics, 18 years ago, and says it just happens to relate more today with it being a current event.

“To me, this is the most important class they have in their high school career,” said Albright.

“I do believe that it is imperative that they have this class and learn as much as they can about government and the rights and responsibilities they have as citizens of this country,” Albright said.

When elections take place, she teaches the same way, focusing on the election process. She takes the current event and dives into it for her students to understand.

“We should have our own opinions so in the future we can be ready to vote. Everyone’s opinion, no matter how small, affects everyone when they vote,” said Francisco Morales.

In some high schools, civics and government would be a 12th grade class, but in Chatham County it’s a 10th grade class.

Albright hopes she gives her students a better understanding of what’s happening on the news and what they see on social media.

“It is very important for young people to go ahead and be informed of their civic responsibilities, their civic duties, and understand how the government works,” she said.

This is the first and only rural high school to be a demonstration school for AVID – that’s an acronym that stands for Advancement Via Individual Determination – and Albright’s students work in groups and go through stations that include a lot of discussions and writing. 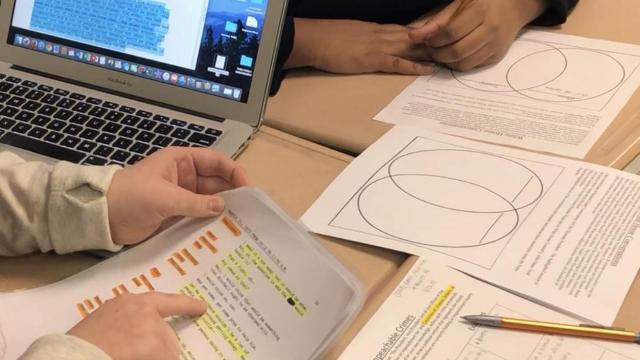 “I enjoy the collaborations in our groups,” said Collin Laggaor.

“We get to talk about real situations in life and describe the process of impeachment and how it works and starts. After taking this class, I will see both sides before I see mine and only mine,” said Laggaor.

During a 90minute class period, the students work in groups to understand the impeachment process by reading the Constitution, watching clips of President Donald Trump’s impeachment hearings, gather information from past impeachment hearings and put pieces of puzzles together to decide if they think Trump should be impeached or not.

Based on what the students come up with, they reason with their classmates and try to persuade others to their point of view.

“I enjoy the debates and seeing the different points of views. It stops us from being biased because we see from each other’s side,” said Makizah Cotton.

Albright held debates in the class to get students to understand how an impeachment process happens from start to finish.

Within all the group work, they remain civil and respectful while trying to reason and come to a conclusion of whether they are for impeachment or against it.

“Mrs. Albright is just like another mother to me. She gets us, and she understands what we don’t know and tries to teach us by that. She really cares about us learning about the impeachment process and everything,” said Carleigh Gentry.

“We’re the next generation, and we have to know these things because soon, we’re going to be the new history, and we need to make sure that we do things right,” said Gentry.

Albright wants all of her students to have knowledge about the government, know how a president gets voted into office, the checks and balances, and the rule of law when they leave this class.

“The biggest takeaway is learning to be civil with your discussions, learning to be passionate at the same time about your views and opinions, and also learning about the government," Albright said.