Your children's Yellowstone will be radically different 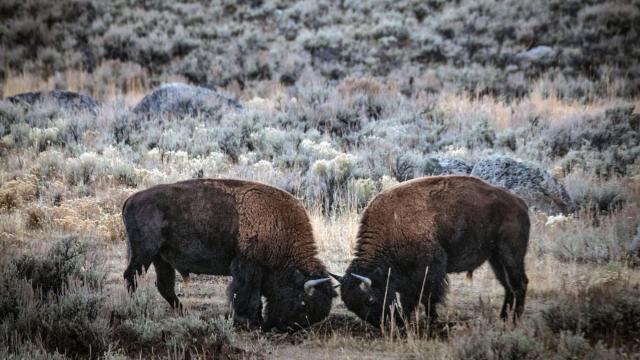 Yellowstone National Park, Wyo. — On a recent fall afternoon in the Lamar Valley, visitors watched a wolf pack lope along a thinly forested riverbank, 10 or so black and gray figures shadowy against the snow. A little further along the road, a herd of bison swung their great heads as they rooted for food in the sagebrush steppe, their deep rumbles clear in the quiet, cold air.

In the United States, Yellowstone National Park is the only place bison and wolves can be seen in great numbers. Because of the park, these animals survive. Yellowstone was crucial to bringing back bison; reintroducing gray wolves; and restoring trumpeter swans, elk and grizzly bears — all five species driven toward extinction found refuge here.

But the Yellowstone of charismatic megafauna and of stunning geysers that 4 million visitors a year travel to see is changing before the eyes of those who know it best. Researchers who have spent years studying, managing and exploring its roughly 3,400 square miles say that soon the landscape may look dramatically different. 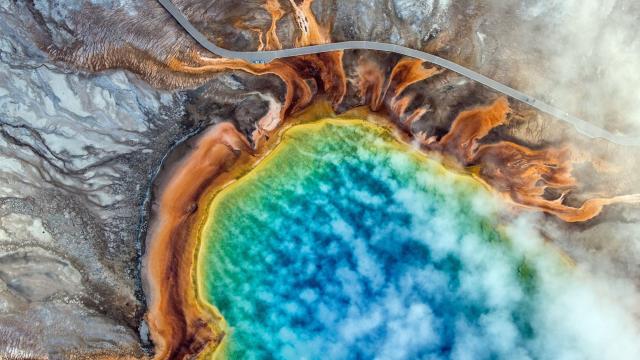 During the next few decades of climate change, the country’s first national park will quite likely see increased fires; less forest; expanding grasslands; shallower, warmer waterways; and more invasive plants — all of which may alter how, and how many, animals move through the landscape. Ecosystems are always in flux, but climate change is transforming habitats so quickly that many plants and animals might not be able to adapt well or at all.

Yellowstone National Park, established in 1872, is one of the UNESCO World Heritage sites threatened by climate change. It is home to some of the country’s oldest weather stations, including one at Mammoth Hot Springs. Data from the park and surrounding area has helped scientists understand and track climate change in the Western United States.

Since 1948, the average annual temperature in the Greater Yellowstone Ecosystem — an area of 34,375 square miles that includes the park, national forests and Grand Teton National Park — has risen about 2 degrees Fahrenheit. Researchers report that winter is, on balance, 10 days shorter and less cold. 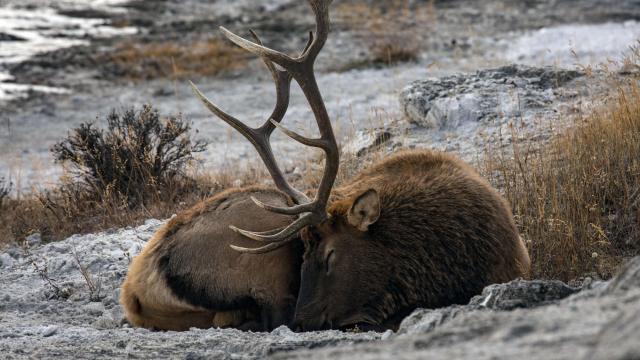 “For the Northern Rockies, snowpack has fallen to its lowest level in eight centuries,” said Patrick Gonzalez, a forest and climate change scientist at the University of California, Berkeley.

Because snow is a cornerstone of the park’s ecology, the decline is alarming to some ecologists.

Summers in the park have become warmer, drier and increasingly prone to fire. Even if rainfall increases in the future, it will evaporate more quickly, said Michael Tercek, an ecologist who has worked at Yellowstone for 28 years.

“By the time my daughter is an old woman, the climate will be as different for her as the last ice age seems to us,” Tercek said.

Yellowstone’s unusual landscape — of snow and steam, of cold streams and hot springs — is volcanic. Magma gives rise to boiling water and multihued thermophiles, bacteria that thrive at high temperatures. 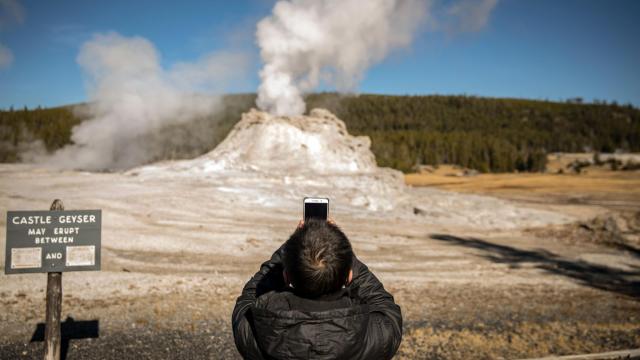 In 1883, The New York Times described the park as an “almost mystical wonderland.”

For many visitors, Yellowstone represents the U.S. wilderness: a place with big, open skies where antelope and bison still roam.

“You run into visitors and they thank you for the place,” said Ann Rodman, a park scientist. “They are seeing elk and antelope for the first time in their lives.” Rodman, who has been working in Yellowstone for 30 years, has pored over temperature and weather data. The trends surprised her, as well as the urgency.

“When I first started doing it, I really thought climate change was something that was going to happen to us in the future,” she said. “But it is one of those things where the more you study it, the more you realize how much is changing and how fast. 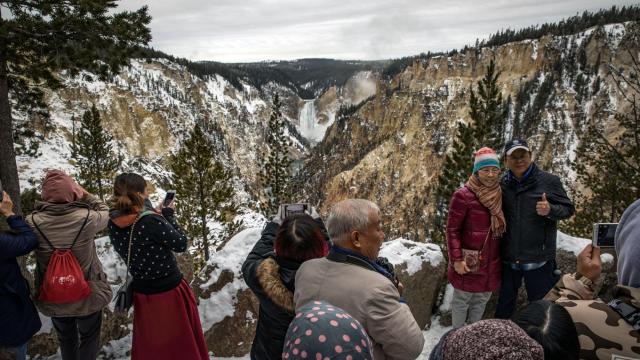 Rodman has seen vast changes near the town of Gardiner, Montana, at the north entrance to Yellowstone. Some nonnutritious invasive plants such as cheatgrass and desert madwort have replaced nutritious native plants. Those changes worry Rodman and others: Give invasive species an inch, and they take miles.

Cheatgrass has already spread into the Lamar Valley. “This is what we don’t want — to turn into what it looks like in Gardiner,” Rodman said. “The seeds come in on people’s cars and on people’s boots.”

Cheatgrass can thrive in disturbed soils and can ignite “like tissue paper,” she said. It takes hold after fires, preventing native plants from regrowing.

If cheatgrass and its ilk spread, bison and elk could be affected. Cheatgrass, for instance, grows quickly in the spring. “It can suck the moisture out of the ground early,” Rodman said. “Then it is gone, so it doesn’t sustain animals throughout the summer the way native grasses would.” In recent years, elk have lost forage when drier, hotter summers have shortened what ecologists call the green wave, in which plants become green at different times at different elevations, said Andrew Hansen of Montana State University.

Some elk now stay in valleys outside the park, nibbling lawns and alfalfa fields, Hansen said. And where they go, wolves follow. “It is a very interesting mix of land-use change and climate change, possibly leading to quite dramatic shifts in migration and to thousands of elk on private land,” he said.

Drier summers also mean that fires are a greater threat. The conditions that gave rise to the fires of 1988, when a third of the park burned, could become common. 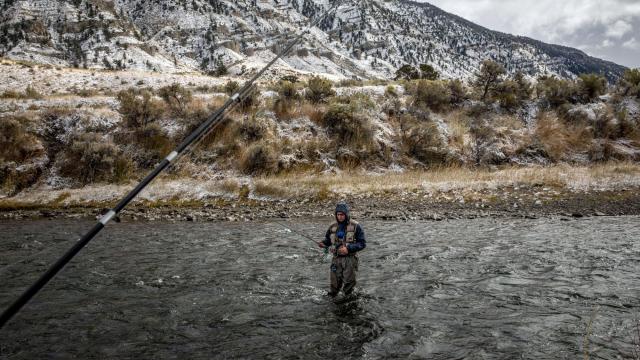 By the end of the century, “the weather like the summer of ’88 will likely be there all the time rather than being the very rare exception,” said Monica Turner of the University of Wisconsin-Madison. “As the climate is warming, we are getting fires that are happening more often. We are starting to have the young forests burn again before they have had a chance to recover.”

In 2016, a wildfire swept through trees in a section near the Madison River that had burned in 1988. Because young trees don’t have many cones on them, Turner said, they don’t have as many seeds to release to form new forest. The cones they do have are close to the ground, which means they are less likely to survive the heat.

Repeated fires could lead to more grassland. “The structure of the forests is going to change,” Turner said. “They might become sparse or not recover if we keep doing a double and triple whammy.”

Forests shade waterways, and those too are experiencing climate-related changes. “We can very definitely see warming trends during the summer and fall,” said Daniel Isaak of the U.S. Forest Service. “Stream and river flows are declining as snowpack declines.” As fish become concentrated in smaller areas, Isaak said, disease can increase in a population because transmission is easier.

In 2016, the Yellowstone River — famous for its fly fishing and its cutthroat trout, which thrive in colder waters — was closed to anglers for 183 miles downstream from the park after an outbreak of kidney disease killed thousands of fish. “The feeling was that this was a canary in the coal mine,” said Dan Vermillion of Sweetwater Travel Co., a fly-fishing operation in Livingston, Montana.

Lower flows and warmer water are one consequence of spring arriving earlier. Quickly melting snow unleashing torrents is another. Flooding has affected the nesting of water birds such as common loons, American white pelicans and double-crested cormorants. “All their nesting is on lakes and ponds, and water levels are fluctuating wildly, as it does with climate change,” said Douglas W. Smith, a park biologist. And Yellowstone’s trumpeter swans are declining. By the early 20th century, hunters had wiped out most of the enormous birds in the continental United States, killing them for food and fashionable feathers. But 70 or so swans remained in the Yellowstone region, some of them safe inside the park. Those birds helped restore trumpeters nationwide. Now only two trumpeter pairs live in the park, and they have not bred successfully for several years.

Part of the reason, said Smith and a colleague, Lauren E. Walker, could be the loss of nests and nesting sites during spring floods. A pair on Swan Lake, just south of Mammoth Hot Springs, has spurned the floating nest that the Park Service installed to help the birds.

“Heritage-wise this is a really important population,” Walker said. “If this is no longer a reliable spot, what does that mean for the places that may have more human disturbance?”

On the shores of Yellowstone Lake, dozens of late-season visitors watched two grizzly bears eating a carcass, while a coyote and some ravens circled, just a hundred or so yards from the road. “If they run this way,” the ranger called out, “get in your cars.”

Grizzlies are omnivores, eating whatever is available, including the fat- and protein-packed nuts of the whitebark pine. That pine is perhaps the species most visibly affected by climate change in Yellowstone and throughout the West. Warmer temperatures have allowed a native pest, the mountain pine beetle, to better survive winter, move into high elevations and have a longer reproductive season. In the past 30 years, an estimated 80 percent of the whitebark pines in the park have died by fire, beetle or fungal infection. 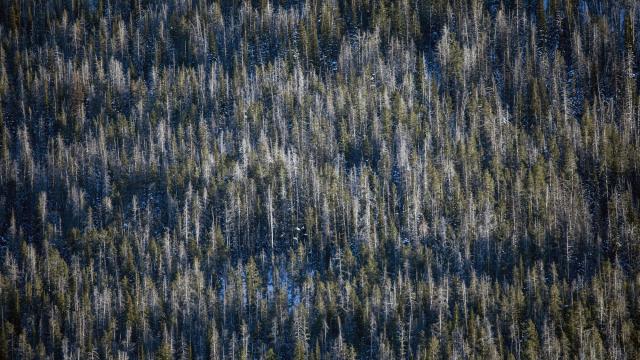 For want of the whitebark pine, a great deal could be lost. The trees are a foundation species, meaning they play a central role in the structure of the ecosystem. They colonize exposed mountain sites, allowing other plants to get a root-hold. Their wide canopies protect snowpack from the sun. They are also a keystone species. They provide food for birds such as the Clark’s nutcracker, which, in turn, create whitebark pine nurseries by caching nuts. And they are an important food source for squirrels, foxes and grizzlies.

When pine nuts are not plentiful, bears consume other foods, including the elk or deer innards left by hunters outside the park. And that can bring the Yellowstone-area grizzlies, relisted as endangered this September, into conflict with people.

The loss of the pines “has far-reaching implications for the entire ecosystem,” said Jesse A. Logan, a retired Forest Service researcher.

“The rest of the landscape, even in the mountainous West, has been so altered that Yellowstone becomes even more important,” Logan said.

Yellowstone provides a refuge for people seeking and delighting in a sense of wilderness. It offers a landscape unlike any other: a largely intact ecosystem rich in wildlife and rich in geothermal features. Yellowstone’s unusual beauty was forged by volcanic heat; heat from humanity could be its undoing.