Durham, N.C. — A driver died when her SUV struck an 18-wheeler head-on on Interstate 40 in Durham just after 4 a.m. Monday. A police officer was involved in a separate crash nearby.

Victoria Lynn Jones, 26, of Graham, was traveling westbound in the eastbound lanes of I-40 when she hit the truck near Exit 274 for N.C. Highway 54. Two eastbound lanes were closed, and Sky 5 video showed delays through the 8 o'clock hour. 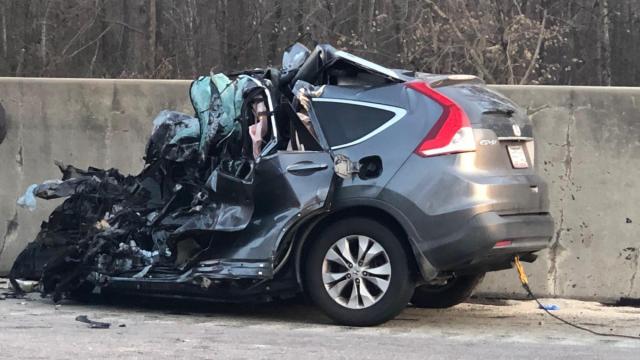 Another SUV hit a Durham Police Department cruiser near the crash scene. No officers were inside the car at the time, and no one was injured in that crash.

Statistics show wrong-way crashes account for more than 500 incidents on North Carolina roadways dating back to 2000.

The North Carolina Department of Transportation and the State Turnpike Authority are currently studying ways to reduce wrong-way crashes. A DOT spokesman told WRAL News it's difficult to identify which access ramps cause drivers the most confusion since police often can't pinpoint where a wrong-way driver accessed an interstate.

A pilot program installed along the Triangle Expressway uses sensors and warning lights to alert wrong-way drivers and authorities.

So far, no wrong way crashes have happened on the expressway since the enhanced detection system was installed a couple years ago.

The challenge for the NCDOT is figuring out a way to install similar technology on roadways like I-40 and others that are not toll roads.