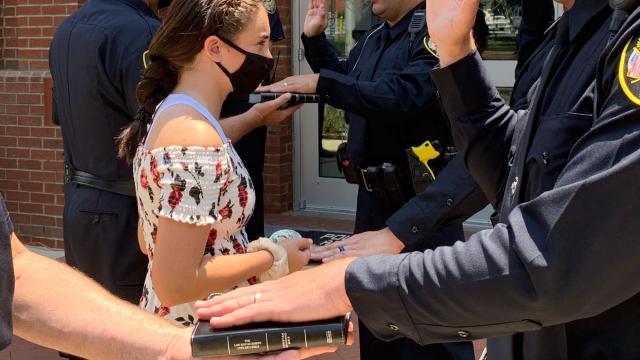 The median age of police officers is just over 39 years old. For many departments, younger officers provide a much-needed perspective for the community that older members of the department may not be able to provide.

In the Triangle, many departments are specifically focusing on recruiting younger officers. Many of these young recruits have spent their whole lives growing up in the communities they later go on to serve — like Officer Alex Watts, whose first year on the force has been in his hometown of Smithfield.

"I enjoy serving the community that basically raised me and made me the man I am today, and it feels good to see the community support me in a different way," said Watts. "Younger officers are bringing in a lot of energy to the department, and a lot of the veterans and the older officers who have a lot of knowledge have really trained and molded us."

For many older officers, policing has gone through major changes since their careers started, thanks to advancements in technology. In fact, when some of the current chiefs and captains started their careers in law enforcement, they were still handwriting their reports with pen and paper.

In Watts' role, he does everything from enforcing traffic laws to serving warrants to community policing. As a younger officer, he hopes to show other young people the impact they could have on their local department.

"I hope to set an example through maturity, professionalism, and the way I carry myself. I represent Smithfield, because while my name is Alex Watts, my name is also Officer Watts of the Smithfield PD. I represent my agency, my chief, my captain, my lieutenant, my coworkers, my parents — it's something bigger than myself," said Watts. "This is not just about you, it's also about the community and your agency. For younger officers, Smithfield is a great place to start your career in law enforcement."

Officer Chandler Koewler, another young member of the Smithfield Police Department, echoes similar sentiments to Watts. After growing up in Wake County and attending Johnston County Community College, Koewler found a place at Smithfield PD, where he's been for just over a year now.

Being a police officer has been a dream of Koewler's since childhood, and so far, the career has lived up to his expectations.

"I haven't been here for long, but as much as I have, I love it every day — day in and day out. The good thing about this job is that every day is different," said Koewler. "If you're wanting to get experience in a bit of everything, then the Smithfield police force is the place for that. I definitely stay active and get far more experience than some people that go elsewhere. There are actually a few people who I graduated with that went elsewhere; being here I've had the chance to experience way more than they have already."

Not only do young officers gain a wide variety of experience, but they can also dip their toes in the water of other law enforcement positions and skill sets — from community policing to criminal investigations to crime scene technicians — and see if they'd be interested in pursuing one of these paths down the road. For Watts, he's even been able to pick up tips from other first responders like firefighters and emergency medical services.

In Koewler's case, it's not just the experience the Smithfield department offers that's been a benefit, but also the opportunity to get started on his career young. Since he was able to get his training and education at Johnston County Community College, he saved time and money, while other young professionals his age may have left a four-year college with significant student loan debt.

Additionally, officers are entitled to several beneficial retirement opportunities and other financial aid, from 401ks to tuition assistance.

"People in the community see new officers day in and day out, but I definitely feel I make an impact by showing that there are still young people out there that are dedicated to this job," said Koewler. "Whenever we're out downtime or stopping for lunch, people come up and either pay for our meal or just thank us for our service. It always means a lot — it might not seem like much, but it makes my day. Doing events for kids, too, when they're wanting to check out the cool cars and say, ‘I want to be like you when I grow up' — it goes a long way."

Both Koewler and Watts find their work rewarding, but they also acknowledge the challenges that come along with it. Departments are in need of young officers from all walks of life, but there are certain skills both officers recommend refining beforehand.

"One of the most important skills is being able to socialize and to communicate well with just about every single person that you encounter," said Koewler. "Whenever you go out and start to talk to people, you start to understand that they're not intimidated by you, and they'll treat you just like anyone else."

"Familiarize yourself with a lot of the local and the state laws, and definitely go ahead and get in shape. It really takes a strong person to do this sort of job, and it's not for everybody, but there's so much you can do with it," added Watts. "The unique thing about police work is everybody's different. Everybody can bring something different to the table. Myself and my coworkers have different experiences, gifts, and talents that we can educate each other on."

"That's a great thing about having younger officers, especially here in Smithfield. You can pick each other's brains and learn from all types of people," he finished. "I really do enjoy where I work and the work I do."