Young People Are Suing the Trump Administration Over Climate Change. She’s Their Lawyer. 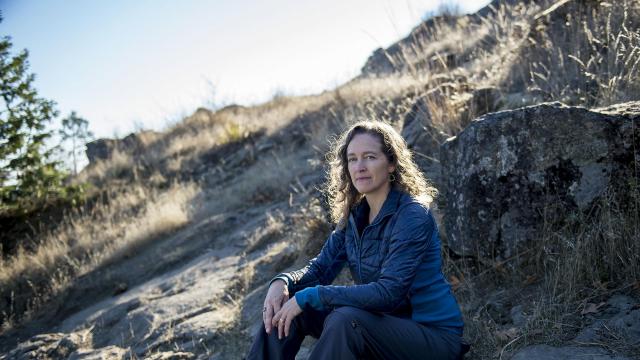 EUGENE, Ore. — Julia Olson climbed the slope of Spencer Butte, taking the steeper of the two paths. Near the summit, shrouding pines suddenly gave way to a vista of the Cascades. On this day, summer wildfires, their season lengthened by climate change, put a haze in the sky.

The climb and return, which she can power through in an hour, is a head-clearing ritual for Olson, an environmental attorney. It is also a place to compose the soaring language of opening and closing arguments. “I do my legal thinking here,” she said.

If all goes as planned, Olson will deliver her opening argument Monday in a landmark federal lawsuit against the Trump administration on behalf of 21 plaintiffs, ages 11 to 22, who are demanding the government fight climate change. It is a case that could test whether the judicial branch has a major role to play in dealing with global warming, and whether there is a constitutional right to a stable and safe climate.

The young plaintiffs claim that the government’s actions, and inaction, in the face of global warming violate their “fundamental constitutional rights to freedom from deprivation of life, liberty, and property.” Their age is central to their argument: For older Americans, the potentially catastrophic effects of climate change are somebody else’s problem. But today’s children will be dealing with disaster within their lifetimes; the youngest of the plaintiffs, Levi Draheim, will be just 33 in 2040, the year by which a United Nations scientific panel now expects some of the biggest crises to begin.

But as of now, less than a week before the trial is scheduled to start in U.S. District Court in Eugene, whether the young people will get their day in court is still an open question. On Friday, Chief Justice John G. Roberts Jr. granted a Trump administration request to put a brief hold on the proceedings to consider government filings that could derail the case.

It is unclear how long the delay will last, or what the outcome will be. The Supreme Court could even dismiss the litigation, though that would be unusual at this early stage.

The lawsuit, Juliana v. United States, is the most visible case for Olson and her nonprofit organization, Our Children’s Trust. The group is involved in similar legal actions in almost every state, and other climate suits around the world.

Olson originally filed the federal suit in 2015 against the Obama administration, demanding faster action from a president already seen as friendly to environmental interests. Working under a legal principle known as the public trust doctrine, which can be used to compel the government to preserve natural resources for public use, the initial complaint stated that government officials had “willfully ignored” the dangers of burning fossil fuels.

Then came President Donald Trump, whose administration is reversing Obama-era climate policies and encouraging the use of fossil fuels, which greatly contribute to warming. “In the view of the plaintiffs, Obama was moving too slowly, and now Trump is moving backward,” said Michael B. Gerrard, director of the Sabin Center for Climate Change Law at Columbia Law School.

The young plaintiffs have demanded, among other things, that the courts force the government to “implement an enforceable national remedial plan to phase out fossil fuel emissions” in an effort to “stabilize the climate system.” The courts could then supervise the government’s efforts.

The Trump administration’s lawyers are not arguing that climate change is a hoax. Instead, they are making similar arguments to those that the Obama administration made when it, too, tried to dismiss the case: that the young people don’t have standing to sue (a legal formula requiring plaintiffs to show that, among other things, they have suffered a concrete, particular injury because of the actions of the defendant) and that the courts are the wrong place to deal with the issue.

“This lawsuit is an unconstitutional attempt to use a single Oregon court to control the entire nation’s energy and climate policy,” Jeffrey H. Wood, the Justice Department attorney in charge of the division representing the government, said in a statement.

But Judge Ann Aiken, who is scheduled to preside over the trial on Monday, has been receptive to the plaintiffs’ theory of the case. “I have no doubt that the right to a climate system capable of sustaining human life is fundamental to a free and ordered society,” she said in a November 2016 decision allowing the case to go forward.

Since then, the case has rumbled toward trial. In an earlier order in July, the Supreme Court denied a government request to intervene, but wrote that the breadth of the plaintiffs’ claims was “striking,” which could be taken as a note of skepticism about the case’s prospects should it reach the justices. Trial preparation has been intense at Olson’s little law firm. Like many law offices, there is a conference room with a long table and computers humming, but there is also chilled kombucha on tap in the kitchen. “I’ve sort of addicted everybody to it,” Olson said.

Before her sprint up the butte on the day I visited, Olson had already attended a morning hearing at Eugene’s soaring federal courthouse. Back at the converted 1920s bungalow that houses Our Children’s Trust, she talked with some young plaintiffs who had stayed over from a campground retreat she had held the week before. The subject: what would be expected of them in their depositions.

Philip L. Gregory, another lawyer in the case, described the deposition setup, jumping up and taking positions where the young people would be seated, where their attorney would be, where the questioning attorney would be and where the videographer would be. At that point, he mimicked someone hand-cranking a camera, which got confused giggles from the smartphone generation.

“Or climate change,” he agreed.

Olson grew up in Colorado Springs, the daughter of Nebraskan transplants who tended to vote Republican. She attended the University of Colorado, Boulder, and stayed in the state to live the life of a ski bum while deciding her next move.

She took the LSAT but left the test thinking she had done poorly. “I didn’t even apply to any law schools,” she said. The test results were a pleasant surprise. She received her degree from Hastings College of the Law in San Francisco.

In 2010, she encountered the legal theory that would launch the climate lawsuits when she met Mary Christina Wood, a law professor at the University of Oregon.

Wood had been proposing for some time that lawsuits to stop climate change could be built around the public trust doctrine. But she was no litigator, she said. Olson was.

Since then, Olson has pursued the federal case with meticulous preparation and a relentless work ethic, Wood said. “This could have fizzled with anyone but Julia,” she said. “She has built not just a case, but a movement.”

Legal experts view Olson’s chances with a measure of ambivalence.

“The claims are compelling, and the legal theory is creative,” said David Uhlmann, a law professor at the University of Michigan and a former top Justice Department official on environmental crimes. However, he said, “It is hard to see the Supreme Court upholding a favorable verdict, if the case gets that far.”

Erwin Chemerinsky, dean of the University of California, Berkeley, School of Law, pronounced himself a fan of the suit. Though he acknowledged that the courts tend to frown on creative legal theories, he noted that they do sometimes make new law in cases like Obergefell v. Hodges, which found a right to same-sex marriage, and Brown v. Board of Education, the landmark school desegregation case. “Creative lawyering there triumphed,” he said. With this case, he said, “We’ll see how it goes in the courts.” he plaintiffs say they are ready, having waited three years of their young lives to see the case reach a courtroom. Olson found many of them through their own environmental activism. She interviewed each of them, exploring the personal threats they faced from climate change (Levi Draheim, for example, lives on a Florida barrier island imperiled by sea-level rise).

Kelsey Juliana, the plaintiff whose name appears first in the case, is the oldest of the group at 22. Olson, she said, is “an idol of mine” who balances her legal practice with activism and motherhood.

Juliana recalled a news conference at the courthouse two days after the 2016 election, after Aiken had denied a government request to dismiss the case. Despite that victory, “I was really heartbroken” about the election results, she said.

Olson came up to her and looked her in the eye. No words passed between them, but Olson’s expression, she said, was eloquent. “She was basically saying, ‘I see you’re emotional, and that’s OK. But we still have work to do. And we’re going to do it.'”

As she told the story of their silent moment, her eyes filled with tears. “It was vulnerability on both of our parts, and it was OK to be vulnerable,” she said. “But we were also strong.”