You Are What You Wear ... Sometimes 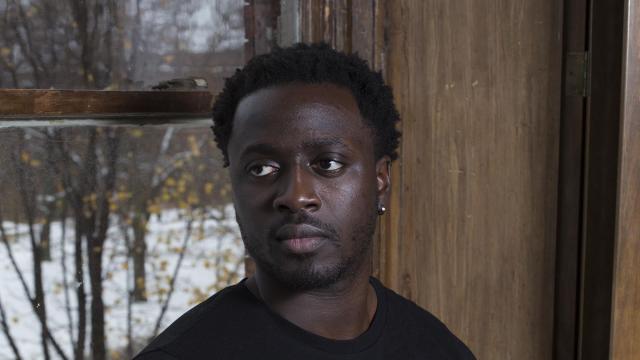 Nana Kwame Adjei-Brenyah is not an easy read. That’s not a comment on his literary output. Adjei-Brenyah, the author of “Friday Black,” a much-lauded collection of short stories exploring themes of violence, racism and the excesses of U.S. consumer culture, arrived for an interview at The New York Times wearing an acid-washed jacket, a black hoodie and jeans, his outfit so standardized, so coolly underplayed, that it defied interpretation.

“I’m on tour, and this is what’s clean,” he said. But of course there was more to it than that.

Like some of his characters, Adjei-Brenyah, 27, spent a portion of his teens and young adulthood selling lofty down parkas at a mall, in his case the Palisades Center in West Nyack, New York. Keenly aware as a salesman, and as a black man, that clothes can be decisive in the way one is perceived, he has mastered the arcana of racial coding — sartorial profiling, that is — a skill he exploits in his life and his fiction to comic and often unnerving effect.

Sure, his turnout last week was a nod to practicality. “I guess I could have imagined looking more business-y, but I’m wearing what makes sense for where I’m going to be doing today,” said Adjei-Brenyah, who was bound that afternoon for Philadelphia. But it was also a statement.

“I’m not anything less than I might have been because I’m wearing a hoodie,” he said.

That phrase might have resonated with Emmanuel, the conflicted protagonist of “The Finkelstein 5,” the first story in the collection, the character playing up or tamping down his blackness at will.

“If he wore a tie, wing-tipped shoes, smiled constantly, used his indoor voice, and kept his hands strapped and calm at his side, he could get his Blackness as low as 4.0,” Adjei-Brenyah writes. To show solidarity with his radicalized peers, Emmanuel wears loosefitting cargo pants, patent leather Space Jams, a black hoodie and a snapback cap. He steps out into the world, “his Blackness at a solid 7.6.”

Prepping for a job interview, he would look for something at the mall “to bring him down to at least a 4.2.” But along the way, he resorts to a challenging gesture, flipping his cap backward and “feeling his Blackness leap and throb to an 8.0.”

The notion of dialing one’s racial profile up or down along a sliding scale may seem over the top. “You can’t reduce blackness to numbers,” Adjei-Brenyah acknowledged. “But in writing, that’s the wit, part of the fun of it, pointing up how absurd it is what people are doing when they’re judging you.”

Still, from time to time he engages in his own form of self-profiling, adjusting his garb to chime with other people’s expectations.

“You learn quickly that your success, your opportunities, even your safety depend on it,” he said.

His perceptions stem in part from his vantage as an outlier. Adjei-Brenyah, who is of Ghanaian descent, became aware of his difference early on. “My parents being African, you had the sense that that already was not good,” he said. “That kind of thinking, unfortunately, is built into society.”

He teaches creative writing at Syracuse University, where “just being young and black makes me an outsider,” he said. “Still, I’ve been allowed into a space that’s denied to many people.”

That awareness, he said, was amplified when he entered the workforce. When he was trying to get his first job, he moderated his look and his mannerisms “to mirror the person I was trying to be, to adopt what I assumed is the standard,” he said, “and that standard can be pretty homogeneous.”

As he matured, he discovered, he said, “how to get good at learning whatever you need to be down, to be accepted, whatever it is that gets you in.”

And he honed his people skills. “I worked in a quote-unquote urban clothing store selling Levi’s, graphic T-shirts and North Face stuff and some skate brands to a lot of families and younger people,” Adjei-Brenyah said. He is no stranger to the frenzy of holiday mega-sales, having witnessed his share of Black Fridays, shoppers lunging, shouting and stampeding in their craze to score a parka or pair of cushioned running shoes.

In his fiction such experiences are heightened to harrowing, even nightmarish effect, his suburban malls littered with lifeless or mangled bodies, the casualties of unfettered greed. “Have you ever seen people run from a fire or gunshots?” he writes. “It’s like that, with less fear and more hunger.”

In his title story, “Friday Black,” his hero keeps his cool in the face of a stampede. The furiously gabbling crowd is a challenge to his sales craft: “I can speak Black Friday,” the narrator says. “Or I can understand it at least. Not fluently, but well enough.”

“I hear the people,” he says, “the sizes, the model, the make, and the reason. Even if all they’re doing is foaming at the mouth.”

Adjei-Brenyah’s own retail experiences were less fraught, only fueling his ardor and sharpening his knack for discerning just what is that his customers want. As a merchant, one of your goals, he said, is to lead a customer physically to a mirror. “But some guys don’t need to look at the mirror,” he said. “They just look at their wives.” In retail, he added: “You’ve got to find out who the decider is. You need that person on your side.”

A hybrid of showman and shaman, he learned to upsell or downsell, he recalled, adjusting his tactics to the client’s tastes and needs. He learned as well to project an aura of earnestness and cool authority, along with a generous dollop of fashion sense. “I used psychology,” Adjei-Brenyah said, “and a few little tricks.”

The narrator of “How to Sell a Jacket as Told by IceKing" has inevitably picked up those tricks. “I got words and a smile,” he says, his prowess earning him the title “lord of the winter sales season.” “I wear clothes that show kids I know what’s up. I hook a snapback hat so it hangs through the loops of my jeans.”

Like dressing to code, selling can be a form of impersonation, Adjei-Brenyah said, one that is not without its perils.

“It becomes normal to erase parts of yourself, to fake sincerity,” he said. “You can forget who you really are, and you get comfortable with that.”

But now that he is a celebrated author, sincerity is no longer a pose. “It’s hard to fake being vulnerable over and over again with people you don’t know,” Adjei-Brenyah said. “It’s too emotionally taxing.