Yoga or Tai Chi: Just What the Doctor Ordered 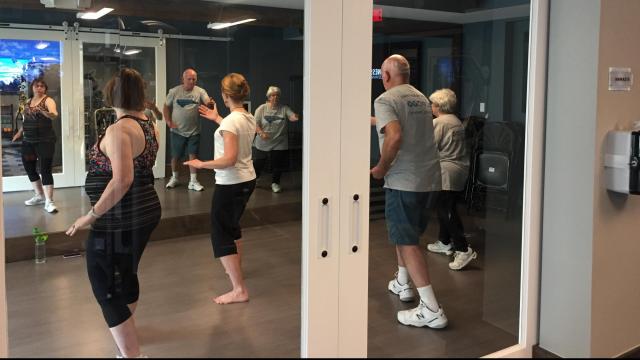 “My father died suddenly and when I arrived home, my mom said she did not want to live anymore,” a colleague recently shared. “She didn't know how to live without him, they had shared 51 years of life together.”

What is a daughter to do? Fortunately, it was also a situation that Paige, my colleague, had professional experience with. “I plucked mom out of the family home, moved her in with me until she had stabilized, then placed her in a senior community and visited her frequently until she had settled in and made some friends.”

It was Wine Down Wednesday. I was standing beside one of the eight tables stationed around a demonstration kitchen, where the community she was talking about offers free cooking classes. The counter was lined with fruit, cheeses, crackers, Russian tea cakes, wine, beer and non-alcoholic beverages.

Rita, Paige’s mother, looked up at me and said, “When I walked into my doctor’s this week, he almost fell over.”

“He didn't recognize her,” the daughter interrupted.

Then Rita, the mother, continued, “I’m doing all these things I never did before… yoga, tai chi, water aerobics, something every day. My doctor said he had never seen a transformation this extreme in less than three months!”

It was uncanny to hear this story because just two hours before, I had been in the office of Dr. James Parsons, one of the longest practicing physicians in Raleigh. He’s worked out of his office on West Jones Street in downtown Raleigh for over forty years.

I was interviewing him because he once said, “The most common thing I prescribe for my older patients is exercise.”

“As people age, many develop chronic problems that have to be accepted and dealt with and lived with,” he said.

I appreciated his frankness.

“Unlike with younger individuals where medication may provide a cure," he continued, "in older individuals, that’s not going to happen. The use of drugs, the polypharmacy, the variations of absorption and drug to drug interactions in older people—it’s risky business.”

“Any particular exercise?” I asked.

“It’s been scientifically proven that eastern exercises, like Tai Chi and yoga, not only increase strength and flexibility, they might be more effective than anything else in reducing the fall risk in elderly people. And falls are responsible for 50% of accidental deaths in old people.”

"Furthermore," he added, "they're beneficial for mental status as well."

In one study of 69 older adults with mild depression, weekly yoga sessions reduced depression scores by 40 percent at six months and the scores were sustained over time.

Glenda Mackie, who has been teaching yoga for many years, said, “in yoga, we practice bringing our attention to sensations in the body and the movement of the breath. Over time, we can more easily be with what is happening in our minds and our bodies without the need to ignore, escape, create worst case scenarios or feed negative thoughts with more negative thoughts! We just continually practice bringing our attention back to the breath, inviting in more ease.”

Rita, the woman in front of me, was living proof... After she left the table to go visit with some other friends, her daughter Paige pulled me over and said, "I don't fully understand how, but mom has been utterly transformed."

When I asked Dr. Parsons if his patients ever give push-back, he said, “My patients listen to me. Many I’ve known for decades. And we recommend Tai Chi in conjunction with traditional physical therapy for gait training and strengthening. Yoga provides flexibility, strength, core exercises… all these things are very important in elderly people for both physical and mental health.”

My colleague's mother, Rita, is a walking advertisement for that sentiment.