Yep, those are giant bouquets of flowers popping up in public trash cans in the Triangle

Nope ... your eyes aren't deceiving you. That was a giant flower bouquet springing up from a public trash can in Chapel Hill.

The N.C. Museum of Art is at it again with its trash can bouquets to promote its fifth annual Art in Bloom, which runs March 21 to March 24. Last year, the museum placed five giant bouquets around downtown Raleigh to promote the event. This year, they've more than tripled the number to 17 and expanded to across the Triangle. 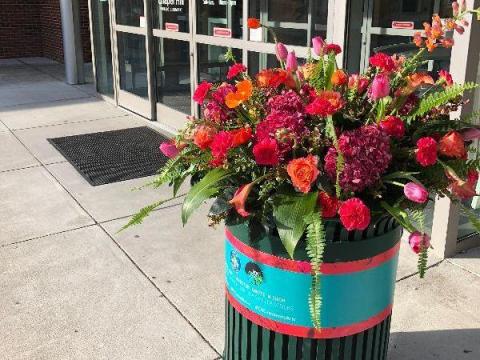 Two bouquets have already popped up at Chapel Hill’s Peace and Justice Plaza and the Chapel Hill Public Library, with three more Franklin Street locations planned through Sunday, March 10, according to a news release. The Town of Chapel Hill helped coordinate locations ahead of the town’s Second Friday Art Walk and Saturday’s UNC–Chapel Hill vs. Duke University basketball rematch in Chapel Hill. Chapel Hill floral designer Amy J. Wurster of Knots 'N Such designed each of the bouquets. 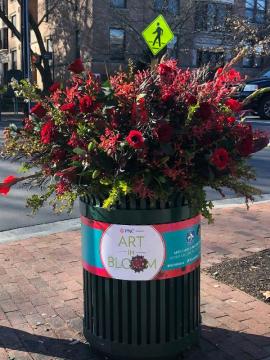 Five Raleigh locations, including Union Station and Dr. Martin Luther King Jr. Memorial Gardens, and five Durham cans, including at Central Park and the American Tobacco campus, will continue to blossom from March 11 to March 15, according to the release. The City of Raleigh Arts Commission and City of Durham Public Art Program helped place and manage these installations. The NCMA worked with Durham floral designers Pine State Flowers and Jennifer Wood and Raleigh-based floral designers E. W. Fulcher and Pam Reynolds of Bloom Works and Steve Taras of Watered Garden Florist Studios to create the giant displays, the release says.

“Art in Bloom encourages visitors to view art through a new lens,” said Museum Director Valerie Hillings in a news release. “We hope the trash can bouquets also offer a moment of pause and delight ahead of our annual festival of flowers.”

Art in Bloom features the work of more than 50 floral designers from around the country, including the trash can bouquet creators, putting their creativity to the test to design floral installations based on works in the NCMA’s collection.